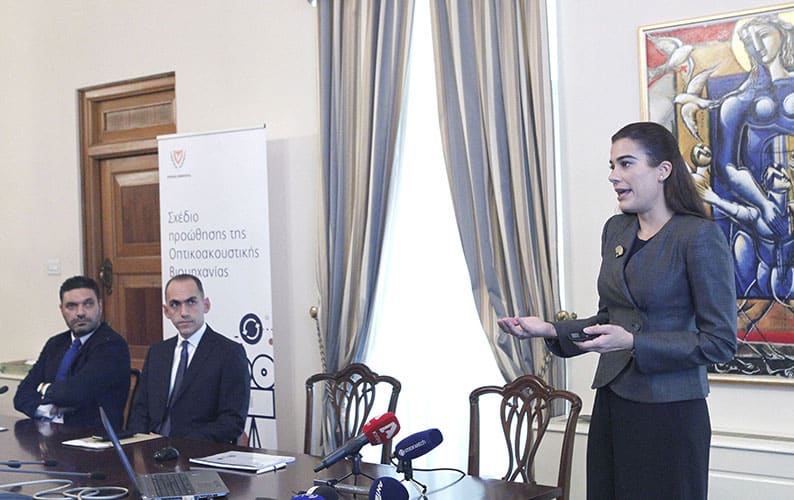 Cyprus is seeking a stake in the film and TV industry following the cabinet’s approval of a scheme to attract overseas productions, the finance and interior ministers said on Wednesday.

“It is an investment scheme that combines very satisfactory and important tax incentives, tax redemptions and subsidies to encourage this very important and promising industry,” Finance Minister Harris Georgiades said.

By 2020, the audio-visual industry is expected to have a global turnover of more than €50bn he said.

“We believe that Cyprus can benefit and claim a stake in this large and important industry by utilising this scheme, but also with all the other competitive advantages our country offers as an investment destination.”

The scheme has been put together by the Unit of Administrative Reform in cooperation with the finance ministry and the Cyprus Investment Promotion Agency (Cipa).

Cipa director general, Natasa Pilides, said that production companies that opt to film in Cyprus will be able to choose between cash rebate – partial refund of the amount invested on the film – or tax credit, and can also benefit from tax discounts on investments made on equipment and infrastructure, and VAT returns on expenditure in scope.

The cash rebate may reach up to 35 per cent of expenditure made in Cyprus and is capped at €650,000 for each production. The scheme includes the production of films, TV series, documentaries and cartoons.

Cipa, which will implement the scheme, will also offer constant support to help investors cut through red tape in terms of permits, importing and exporting equipment and dealing with relevant state services and ministries.

A five-member committee of officials from the administrative reform unit, the education and finance ministries, Cipa and the Cyprus Tourism Organisation, will be tasked with assessing productions based on financial and cultural benefits.

Productions will score extra points if they satisfy a number of cultural criteria such as hiring local actors in leading roles, highlighting local or international cultural elements and using the local language, etc.

The finance ministry will be in charge of the scheme until the junior ministry for development is set up.

“This is a very important scheme that opens a new horizon to a new sector,” said Interior Minister and Reforms Commissioner, Constantinos Petrides, adding that it could create new jobs.

This scheme, he said, was designed following expert advice, and by studying the best practices of other countries that attract film productions such as Malta, Ireland, UK, Germany and France. “We believe that we have succeeded in presenting a very competitive scheme that will bring in such investments,” he said.

Officials said that the scheme is a response to expressed interest from abroad.

Cipa said earlier in the year that Indian filmmakers for example had expressed interest in filming in Cyprus. During his official visit to India last April, President Nicos Anastasiades was received by businessmen of the massive Bollywood film industry.

Pilides said that Cipa would also launch a website with all the information film producers need as regards filming in Cyprus, that will include practical information, filming locations etc.

The new scheme, which is to be sent to the House plenum for approval, will run in parallel to that of the education ministry’s that offers grants for mainly local film productions.

Until now, lack of incentives and the tortuous red tape involved always scared away film makers. Last year, MPs in a House committee meeting were told of a BBC production on the immigration of Cypriots into Britain that was to be filmed in Cyprus, but when producers discovered Cyprus offered no facilities or incentives, they decided to shoot in Malta instead.

The lack of a single body responsible for issuing filming permits in Cyprus was another disincentive. Both local and international producers were required to contact themselves a wide range of state organisations – antiquities department, Cyprus Tourism Organisation, the police, national guard, Civil Aviation, hospitals, etc – to obtain the necessary permits.

Ryanair to cancel even more flights