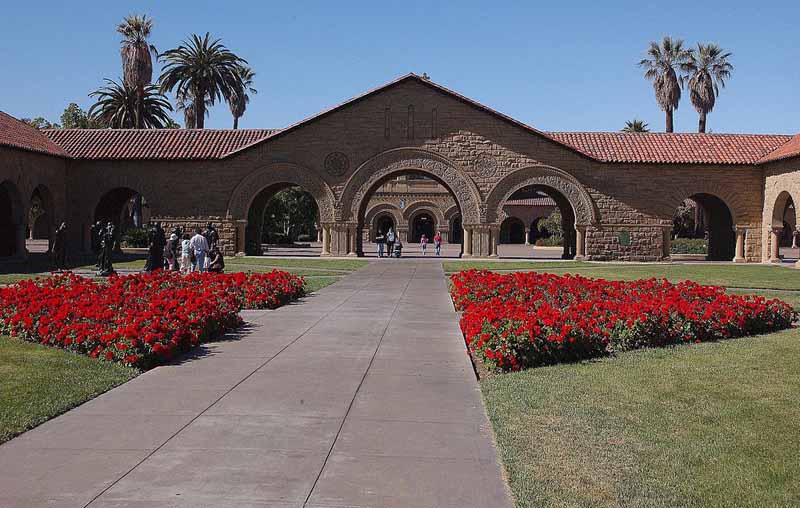 Stanford University, the most innovative university in the world, for the third consecutive year

Tiger economies and competition from China will undoubtedly be forces to reckon with, but anyone looking to find the most influential research leading to the most transformative technologies should look West, not East. That’s the conclusion of Reuters’ annual ranking of the World’s Most Innovative Universities, a list that identifies and ranks the educational institutions doing the most to advance science, invent new technologies and power new markets and industries.

The most innovative university in the world, for the third consecutive year, is Stanford University. Located in the heart of California’s Silicon Valley, Stanford has long played a key role in the development of our modern networked world: A Stanford professor designed the basic communication standard for the Internet, and university alumni founded some of the biggest tech companies in the world, including Google, Intel, Hewlett-Packard and Netflix. Today the university continues to consistently produce original research and technology. Innovations that originate at Stanford are frequently cited by researchers elsewhere in academia and in private industry. Those are key criteria in the ranking of the world’s most innovative universities, which was compiled in partnership with Clarivate Analytics, and is based on proprietary data and analysis of numerous indicators including patent filings and research paper citations.

Overall, the top ranks of The World’s Most Innovative Universities remain largely unchanged, with nine of last year’s 10 highest-ranked universities remaining in the top 10. And the most elite institutions are almost all large, well-established universities based in the United States and Western Europe. Rounding out the top three are MIT and Harvard, which have held onto their respective 2nd and 3rd place rankings for the past three years. In fourth place is the University of Pennsylvania, which climbed four spots from #8 last year. The highest ranked university outside the U.S., Belgium’s KU Leuven (#5), is a nearly 600-year-old institution that maintains one of the largest independent research and development organizations on the planet.

In contrast, there are only two Asian universities in the top 20, both of which are based in South Korea, and one of them actually teaches the majority of its classes in English: South Korea’s KAIST, formerly the Korea Advanced Institute of Science and Technology, ranked #6. Established in 1971 by the Korean government, KAIST was modeled after engineering schools in the United States, and initially funded with a multimillion-dollar loan from the United States Agency for International Development.

Overall, the top 100 consists of 51 universities based in North America, 26 in Europe, 20 in Asia and 3 in the Middle East. Why does Asia underperform? One reason is because Japanese universities – traditionally the research powerhouses of the region – depend heavily on government R&D spending, and the nation has been undergoing deflation and economic stagnation for more than 20 years. That means less money for research and fewer innovations.

According to data from Clarivate Analytics’ Web of Science, which tracks articles published in scientific journals, Japanese researchers accounted for 8.4% of all papers published in 2005, but only 5.2% in 2015. Key research areas such as computer science showed even larger decreases, with the number of published papers falling by more than 37%. As a result, the Reuters ranking shows significant declines in rank for leading Japanese universities, including the University of Tokyo (down five spots to #21), Osaka University (down 13 to #24), and Keio University (down 25 to #78). Japan had nine universities on the list in 2016, but only has eight this year; six of those eight universities saw their rank fall from 2016, and one was unchanged. Only Kyushu University saw its ranking improve, moving from #79 to #68.

Of course, while Japan struggles, other Asian nations are growing fast. China has gone from one university on the list in 2015 to two in 2016, and now three in 2017. The two Chinese universities returning to the list this year both made significant gains (Tsinghua University climbed 15 spots to #51, and Peking University climbed 10 spots to #60); the third, Zhejiang University, appears on the list for the first time at #100. But given China’s massive population and economy, just three universities out of 100 still represents significant underperformance.

To compile the 2017 ranking of the world’s most innovative universities, Clarivate Analytics (formerly the Intellectual Property & Science business of Thomson Reuters) began by identifying more than 600 global organizations – including educational institutions, nonprofit charities and government-funded labs – that publish the most academic research. Then they evaluated each candidate on 10 different metrics, focusing on academic papers (which indicate basic research) and patent filings (which point to an institution’s ability to apply research and commercialize its discoveries), and ranked them based on their performance.

Careful observers might note a few differences between how non-U.S. institutions rank on Reuters’ regional innovation lists, Asia’s Most Innovative Universities and Europe’s Most Innovative Universities, and how they rank on the global innovators list. An institution’s relative ranking may change from list to list, since each ranking is dependent on summarizing 10 indicators and comparing that with others in a specific population; when that population changes, individual rankings might change as well. Furthermore, the global list is restricted to institutions that filed 70 or more patents with the World Intellectual Property Organization during the five-year period examined by Thomson Reuters. The cutoff for regional lists is just 50 patents, allowing a more in-depth view of the most active institutions within a limited geographic area.

Of course, the relative ranking of any university – or whether it appears on the list at all – does not provide a complete picture of whether its researchers are doing important, innovative work. Since the ranking measures innovation on an institutional level, it may overlook particularly innovative departments or programs: a university might rank low for overall innovation but still operate one of the world’s best theoretical physics departments, for instance. And it’s important to remember that whether a university ranks at the top or the bottom of the list, it’s still within the top 100 on the planet. All of these universities produce original research, create useful technology and stimulate the global economy.

Intercollege on the art of chocolate

University of Cyprus makes it onto top universities list