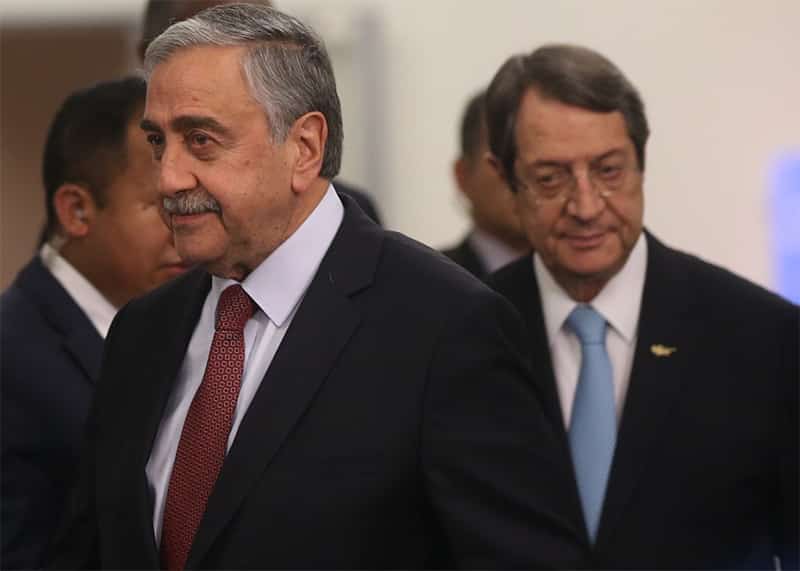 The collapse in Cypriot peace talks in July 2017 have reduced the chances of a permanent reunification deal in the near term from slim to extremely remote, a leading financial research body has said.

A BMI analysis published on Thursday said the 2018 presidential elections were unlikely to be followed by a breakthrough in peace talks.

Talks collapsed on July 7, following a make-or-break week of intensive multilateral diplomatic negotiations in Switzerland that were set to culminate a two-year-old process.

“Officials involved in the talks insisted that the path to a deal in 2017 is not completely closed, and a resumption of negotiations is possible in October or November, but we believe the chances of a deal have been reduced from slim to extremely remote.”

BMI said that with the collapse of the talks, political focus in Cyprus had turned to the 2018 presidential elections, which would have implications for the peace process.

President Nicos Anastasiades was likely to announce by early October whether he will stand again at the presidential election.

“While polling is limited, conditions appear to be in favour of Anastasiades,” BMI said.

It also said economic growth was stronger now than at any point since 2008, and this momentum should be largely sustained into the first quarter of 2018.

It suggested that Anastasiades’ main line of attack would be attacking Papadopoulos’s choice of a eurosceptic as economic adviser.

Also importantly for Anastasiades, it added, the combination of strong growth and healthy fiscal dynamics meant that the government had more room to increase expenditure ahead of the presidential election, which could help boost the incumbent’s popularity.

“All of this contributes to our core view that he will be narrowly re-elected,” said the report.

It said that when the reunification talks collapsed, Turkish Cypriot leader Mustafa Akinci accused Anastasiades of prioritising re-election over a solution to the Cyprus problem.

“This could mean that Anastasiades’ re-election could give him a mandate to push on with talks, but the outlook has certainly deteriorated from late 2016 when it looked like a deal might be reached in 2017.”

Anastasiades insists that the election will play no part in the peace process, but “our core view is that until the next president is chosen, the likelihood of a breakthrough in negotiations is very unlikely”.

The Greek Cypriot position is that the negotiations cannot continue until Turkey decides to come back to the table. The UN’s special envoy to the peace talks, Espen Barth Eide, said that the termination of Turkish guarantees on the island was actually on the cards, but Anastasiades vehemently denied this, saying that the Ankara’s insistance for a permanent presence of Turkish troops was the dealbreaker.

“This may have been a hard-line stance intended to shore up support with the domestic electorate. By failing to get a deal, Anastasiades’ political fortunes may have arguably diminished, but the vast majority of Greek Cypriots had been skeptical that such a deal could have been reached anyway,” BMI said.

“If Anastasiades had agreed to a deal that was totally unpalatable for the Greek Cypriot electorate by ceding too much power to the Turkish side, it would likewise have cost him in the 2018 elections.”

His presidential election opponents would attack him for accepting a solution that did not require a complete pull out by Turkish forces, according to BMI’s analysis. In this regard, the apparent intransigence of the north and Turkey on the troop presence gave Anastasiades a way to return to his domestic electorate and say that he gave it his best effort, but the other side was to blame.

“Anastasiades’ stance may have been influenced by electoral considerations, but it seems clear now that he appears unable to broach the divide with Turkey over security agreements,” the report continues.

It said a change in president may not make much difference to domestic policy, nor make a peace deal more plausible. Diko and its leader Nicolas Papadopoulos oppose a bi-zonal federal solution to the Cyprus problem, calling Turkey an unreliable partner and attacking Anastasiades for conceding too much in negotiations.

Akel, it said, has historically been pro-reunification in principle but on has been reluctant to cede too much Greek Cypriot autonomy, criticising Anastasiades’ approach and promoting a ‘soft no’ vote in the 2004 referendum.

BMI said that from a domestic economic standpoint, Diko has been centrist, and Akel is unlikely to pursue particularly radical policy despite its communist leanings. At his candidacy announcement, Akel’s Stavros Malas, it added, denounced the Anastasiades administration’s failure to tackle economic inequality, but still called for disciplined fiscal policy, with some redistribution of resources possible within a responsible budget framework.

“While this may seem a departure from traditional communist ideology, this formula has appeared to work in other eurozone countries that are slowly emerging from financial crisis, such as Portugal. Bottom Line: Reunification A Long Way Off”.

More displays than ever at the Ideal Home expo