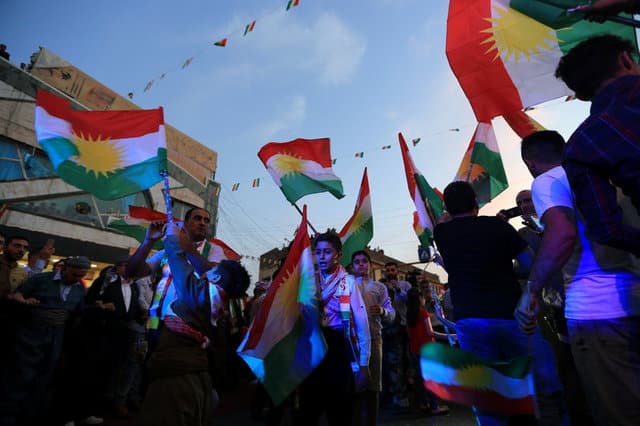 Kurds celebrate to show their support for the independence referendum in Duhok, Iraq

There are many worthy markers that America’s Iraq Wars have been a terrible, terrible waste, but as history loves a signature event, let it be the September 25, 2017 Kurdish independence referendum. While the referendum is non-binding and the final vote tally may not be known for several days (though it will certainly be “yes” to independence), the true results of America’s decades of war in Iraq are already clear.

Along with the ongoing decimation of Iraq’s Sunni population, the referendum means that in practice “Iraq” no longer exists. In its place is a Shiite state dominated by Iran, the de facto new nation of Kurdistan, and a shrinking population of Sunnis tottering between annihilation or reservation-like existence, depending on whether the United States uses the last of its influence to sketch out red lines or abandons the people to fate.

The waste comes in that a better version of a de facto tri-state Iraq was available in 2006. Every life lost (out of a million some, including 4,424 Americans), every dollar spent (in the trillions), and every unanticipated outcome suffered (rise of Islamic State, conflict in Syria, de-democratization of Turkey) since then has been unnecessary.

The post-World War One failure to create a Kurdish state resulted in 30 million Kurds scattered across modern Iraq, Iran, Turkey, and Syria. The 2003 American invasion of Iraq destroyed civil order in much of the area populated by those Kurds and opened the door to Iranian influence. Iran and its Iraqi-Shiite allies directed political violence against Iraqi Sunnis, paving the way for a Sunni protector, Islamic State, to move in.

When the American-trained (cost: $25 billion) Iraqi national army dropped its weapons and ran in 2014, and Shiite militias proved too weak to fill the breach, Obama reinserted the American military into Iraq, saving the Kurds, by then also under threat from Islamic State. The United States subsequently turned those Kurdish fighters loose in Iraq and later Syria against Islamic State. It was expediency over strategy; there was no force otherwise available in bulk.

And it kind of worked. In the short run.

The Kurds, with American help, blunted Islamic State’s progress. The problem was that while American diplomacy, the carrot-and-stick of aid, and the difficulty of maintaining long-distance logistics saw the Kurdish forces replaced by Shiite militias in some locations, the Kurds held on to their gains in the north, having in most instances displaced Iraqi Sunnis. Victorious and bloodied, the Kurds were not about to renounce their hard-earned gains.

The need for American arms did force Kurdish leaders to postpone an independence referendum, opposed by Washington, in 2014. Three years later, with Islamic State mortally weakened, Washington no longer holds sway over Kurdish ambitions. And although the Sept. 25 referendum has no legal force, Kurdish leaders will use the vote to push Baghdad for full autonomy. Donald Trump, the fifth consecutive American president to make war on Iraq, may be the last – simply for lack of an Iraq to fight over.

The ground truth of autumn 2017 – a Kurdistan in the north, a Shiite state in the south, a marginalized Sunni population out west – is pretty much the deal that could have been had in 2006 when then-Senator Joe Biden proposed dividing Iraq into statelets. Biden wanted the United States to leave a “residual force to combat terrorists and keep the neighbors honest.” The Senate actually passed a resolution supporting Biden’s idea.

It probably would have stabilized the region. The Middle East in 2006 was a very different place.

In 2006 Iran faced an American military as yet undamaged by an additional decade of grinding war. That military sat on both Iran’s western border with Iraq and its eastern border with Afghanistan. The Iranian nuclear program was years behind where it is today. Syria was a relatively stable place under not-then-yet-enemy of the free world Bashar al-Assad; indeed, the British-educated Assad was initially seen as a minor reformer. Turkey was stable. Russia was not a major player in the Middle East.

With many of 2017’s regional Pandoras still in the box, by Middle Eastern standards security in a divided Iraq would have been manageable via a modest American military presence.

Instead, events of the last decade mean the chance of Kurdish independence adding to regional stability is near zero. Iran, fearing that an independent Kurdish state could threaten its own sectarian balance, is already conducting maneuvers on the border, has canceled flights to and from Kurdistan, and will push its proxies in Baghdad to take action. Will Turkey, now politically distant from NATO, move to open war over disputed borderlands with Kurdistan? The Turkish parliament just extended its authorization for cross-border incursions for another year. Will Kurdish minorities in Turkey and Iran see this all as their moment to rise? Will Israel, which backs Kurdish independence in its search for regional allies, supply weapons?

In a best-case scenario, where everyone tacitly acknowledges Kurdistan while maintaining the status quo (as with Taiwan, which officially exists as a part of China even as it acts like an independent nation) there may be a measure of stability in the near term. Baghdad will talk tough even as it allows the Kurds a surprising amount of free reign – for example, Baghdad has withdrawn its police from contested Kirkuk, leaving Kurdish forces fully in charge of the oil-rich city. Kurdistan already has full control over its own education, security, military, taxes, and diplomatic representation. Massoud Barzani, president of the Kurdistan regional government, has experimented with diplomatically vague language, saying “self-determination wouldn’t mean a direct separation from Iraq.”

American policy has been a blurry gray for some time, calling for the referendum to be postponed without actually supporting or opposing independence. Traditionally the State Department favored a united Iraq somehow, while the Pentagon, with its history of in-the-dirt cooperation with Kurdish fighters stretching back to the 1991 no-fly zone and Operation Provide Comfort that essentially established the preliminary borders of Kurdistan, has been more sympathetic towards independence. The wording of America’s reaction (there has been no post-election statement issued as this is written) to the referendum could signal which part of government is making foreign policy in Iraq these days.

What seems clear is the American role going forward will be mostly limited to diplomacy, and that, regardless of who is carrying out the task, is not the country’s strong suit these days. There seems no appetite in Washington for large-scale troop redeployments, the kind of boots-on-the-ground necessary to decisively shape events.

The American military, which once could have played a role similar to its help in bringing peace to former Yugoslavia, instead will exist as a crumple zone among its own warring semi-allies. Such a scenario exposes what might have been in 2006 when the United States could have managed events, and 2017, when America can do little more than witness them.