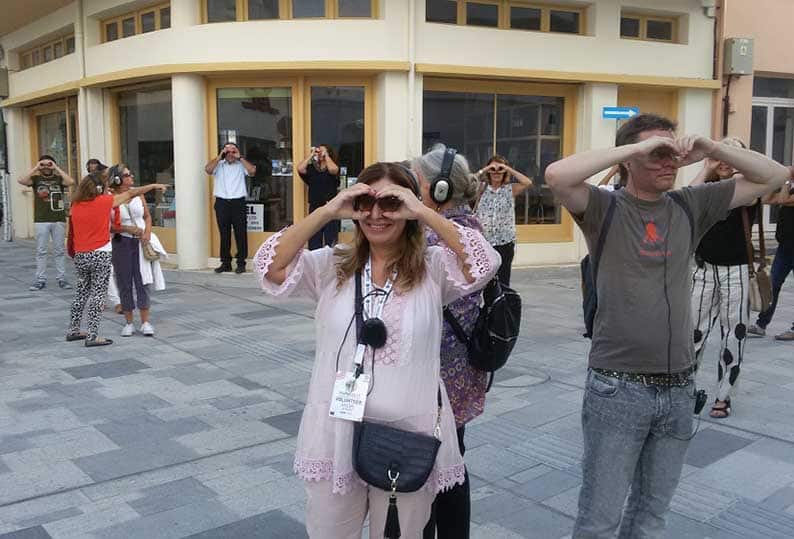 A live art experience has been launched in Paphos as part of the Pafos2017 programme which sees groups of people don headphones for a collective and yet individual experience.

The creation of ‘Remote Paphos’ is undertaken by Rimini Protokoll, a pioneering theatre group considered one of the most important and influential to emerge in Europe in the last few years.

A clever yet simple concept sees the participants, in groups of fifty, mostly strangers, along with an unwitting public become the actors, and the surroundings their stage. Individuals are guided through the pre-planned route via instructions relayed through high quality Sennheiser headphones, attached to small ‘player’ clipped to a belt or pocket.

Jörg Karrenbauer, one of the creators of ‘Remote X’ has worked with the forward thinking award winning Germany based collective since 2005. He told the Cyprus Mail that the experience of the ‘horde’ is all important and that they have found that groups of people all over the world behave in very similar ways when ‘horded’ together.

The X signifies each town the experience takes place- so far in tens of cities- in this case ‘Remote Paphos’.

“This is a type of audio tour but something different and it takes you through a city and a number of urban places and buildings. The idea is to question how we behave as individuals and as a group,” he said.

He noted that at the beginning of the ‘tour’ no-one wants to take the lead, which was the case on the tour I completed, but that soon changed as the group of fifty strangers became more comfortable with each other.

‘Remote Paphos’ also delves into the systems that govern us and our lives and how we respond to them, mentally and socially. It questions our individuality, judgment and whether we consider ourselves to be conformists or not and also how we respond and view technology in our lives. It is also a hugely fun experience, with lighter moments of laughter, dancing and joviality

Starting and finishing at Fabrica Cave in Kato Paphos, free transport is provided back to the cave and Pafos2017 advise would- be participants to wear trousers and comfortable shoes.

There is something disconcerting about donning a pair of headphones and walking with a group of unknowns around your town, watching them, sizing them up as prompted, crossing busy roads en masse, marching up streets and along walkways. However, feelings of unease, embarrassment or discomfort soon wane and alliances are formed, bonds struck up and humanity questioned, all within the one hour 40 minute experience.

‘Remote X’ is an individual action and yet a group participation and a carefully chosen musical score accompanies the entre experience, piped through headphones as a soundtrack to the wearer’s life in those moments.

The timing on my trip was impeccable, an impressive feat taking into account human unpredictability, or so I thought, but Karrenbauer, was quick to correct me noting that it’s the exact opposite.

“Humans generally react in the same way in a group whatever the city. There are stages as they become more comfortable, they also start off slow and then gain momentum and speed as the experience moves forwards,” he said.

‘Remote X’ allows participants to view everyday surroundings and experiences in daily life from a different perspective and contemplate that we are all individual and yet all connected.

The tour in every city always starts away from the centre, combining a ‘remote’ location and being remote controlled, said Karrenbauer.

The general public react in different ways on different days to a group of people wearing headphones.

“Many probably thought that we were on a sightseeing tour”, said one participant named Andri, “but there were times when we stood still or did actions together which must have bemused them”, another participant chimed in.

“It was great fun and I really enjoyed it, I didn’t feel embarrassed at all and I have already told all of my friends to come,” said another.

At times introspective and at others unconstrained and altruistic, this unique study of human behaviour also encouraged group bonding but also superior self- importance.

“This is a good way for people to reclaim their city back from the businesses and so on, to project your own view onto certain areas and have your own experience there,” said Karrenbauer.

No-one knows what to expect when arriving to participate in Remote Paphos, and there are parts which Karrenbauer requested should not be given away, but the experience is a positive and fun one, which encourages us all to reflect on our lives to some extent and is highly recommended.

Performances are priced at 10 euros and currently take place from Fabrica Cave at 5pm until October 4th. A second chance to participate will run from November 3- November 8 at 3.30pm.

Why the Kurdish referendum means the end of Iraq