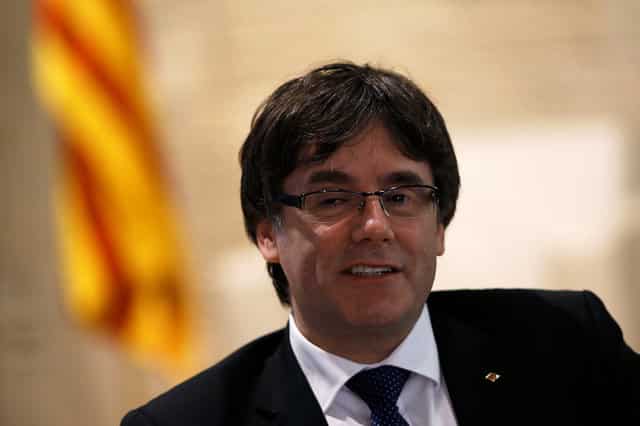 Catalan President Puigdemont smiles during an interview with Reuters ahead of the banned October 1 independence referendum, in Barcelona

Catalonia’s leader made clear his government was determined to go ahead with a Sunday vote on independence that Madrid calls illegal and which has thrust Spain into its most dramatic political crisis for decades.

The central government, which has sent thousands of police reinforcements to the region to prevent people from voting, meanwhile insisted on Friday the referendum would not happen.

“Everything is prepared at the more than 2,000 voting points so they have ballot boxes and voting slips, and have everything people need to express their opinion,” Catalan leader Carles Puigdemont told Reuters in an interview on Friday.

Courts have ordered police to cordon off schools scheduled to be used as ballot stations. In a bid to keep them open, parents have called for a mass school sleepover this weekend, with tents and sleeping bags, free paella and cinema. Organisers said 60,000 had already registered to participate.

Separatists have called on people to turn out at the polling stations in a mass statement of “peaceful resistance”, even if they are prevented from voting.

“I don’t believe there will be anyone who will use violence or who will want to provoke violence that will tarnish the irreproachable image of the Catalan independence movement as pacifist,” Puigdemont said.

Madrid, which claims the authority of a constitution that declares the country to be indivisible, remained implacably opposed to the vote.

“I insist that there will be no referendum on Oct. 1,” central government spokesman Mendez de Vigo told a news conference following the weekly cabinet meeting, reiterating that the vote was illegal.

Hundreds of thousands of Catalans have taken to the streets in recent weeks to protest Madrid’s campaign to suppress the vote. Police have confiscated thousands of voting slips, and courts have fined and threatened to arrest regional officials.

In a sign that large crowds are again expected on the streets on Sunday, department store chain El Corte Ingles said it would shut three stores in central Barcelona. The central government said airspace above the city would be partly restricted.

Lines of tractors draped in the red-and-yellow striped Catalan flag left provincial towns on Friday, planning to converge on Barcelona in a sign of support for the referendum.

Catalan leader Puigdemont called on the police not to act in a “political” way when carrying out their duties on Sunday.

“I would like them to use the same standards that the Catalan regional police use. Not political standards, not on political orders, but policing and professional standards,” he said.