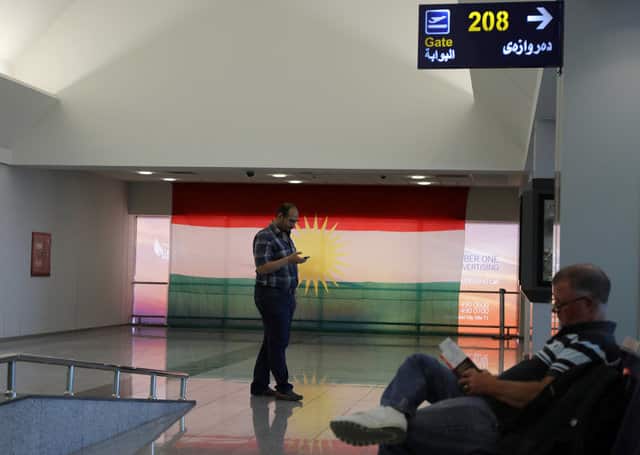 Passengers wait to depart on a Turkish Airlines flight at a gate at Erbil International airport, in Erbil

The last international flight left Erbil airport on Friday as the Baghdad government imposed an air ban in retaliation for an independence vote by Iraqi Kurds that has drawn widespread opposition from foreign powers.

Iraq’s Kurds overwhelmingly backed independence in a referendum on Monday, defying neighbouring countries which fear the vote could lead to renewed conflict in the region.

Foreign airlines suspended flights to Erbil and Sulaimaniya in the Kurdish region, obeying a notice from the government in Baghdad, which controls Iraqi air space.

Erbil airport was busier than usual as passengers scrambled to catch the last flights out before the ban went into force at 6.00 p.m. (1500 GMT) on Friday.

Domestic flights are still allowed, so travellers are expected to travel to Kurdistan mostly via Baghdad’s airport, which will come under strain from the extra traffic.

Maintaining the travel curbs is likely to discourage visits by businessmen and Kurdish expatriates, and affect industries including hotels, financial services, transport and real estate.

More than 400 Kurdish travel and tourism companies are directly affected by the flight ban and 7,000 jobs are at risk in the sector, Erbil-based Rudaw TV said.

The Kurdistan Regional Government (KRG), meanwhile, refused to hand over control of its border crossings to the Iraqi government, as demanded by Iraq, Iran and Turkey in retaliation for the independence referendum.

As the crisis unfolded, Iraq’s top Shi’ite cleric intervened to oppose the secession of the Kurdistan region, adding to pressure on the Kurds in his first directly political sermon since early last year.

Grand Ayatollah Ali al-Sistani asked the KRG “to return to the constitutional path” in pursuing self-determination for the Kurdish people, a representative said in a sermon on his behalf.

“Any attempt to make secession an accomplished fact will lead to undesired consequences affecting Kurdish citizens,” the sermon said.

Turkey, which has already threatened economic sanctions and a military response to any security challenges posed by the referendum result in neighbouring northern Iraq, has maintained a drumbeat of opposition to the Kurdish vote.

After talks in Ankara with Russian President Vladimir Putin on Thursday, Turkish President Tayyip Erdogan said the referendum was illegitimate and Russia and Turkey agreed that the territorial integrity of Iraq must be preserved.

Turkey and Russia have strong commercial ties with the semi-autonomous Kurdish region in Iraq. But the vote has alarmed Ankara as it battles a separatist insurgency from its own large Kurdish minority.

While Turkey has threatened to cut off the Kurds’ oil export lifeline – a pipeline that runs through Turkish territory – Ankara has so far mostly held back from specific action against Iraqi Kurdistan.

Prime Minister Binali Yildirim said Turkey would target only those who decided to hold the referendum since Ankara would not make civilians living in northern Iraq pay the price for the vote.

Iran banned the transportation of refined crude oil products by Iranian companies to and from Iraqi Kurdistan.

Kurdistan would, however, be able to resist an economic blockade, a World Bank official told Reuters.

“It is self-sufficient in electricity and fuel supply as it has the oil and gas fields, the refineries and the power stations,” the official said.

“It has also the land and the water resources to sustain a basic subsistence even if borders are shut completely.”

The United Nations offered on Thursday to help resolve the problem between the KRG and Baghdad, the Iraqi foreign ministry said following a meeting between Foreign Minister Ibrahim al-Jafari and Jan Kubis, the senior U.N. envoy in Iraq.

Their autonomous region in Iraq is the closest the Kurds have come in modern times to a state. It has flourished amid Iraq’s civil war but may struggle to maintain investment if it is blockaded economically.

The United States, major European countries and nearby Turkey and Iran opposed the referendum as destabilising at a time when all sides are still fighting Islamic State.

A spokesman for the U.S.-led coalition said there had been a loss of focus in the fight against Islamic State since the referendum.

Baghdad has heaped pressure on the Kurds, demanding they cancel their referendum, while parliament urged the Iraqi government to send troops to take control of oilfields held by Kurdish forces.

The Kurds consider Monday’s referendum to be an historic step in the generations-old quest for a state of their own, while Iraq considers the vote unconstitutional.

Iraqi Kurdish leader Masoud Barzani has said the vote is not binding, but meant to provide a mandate for negotiations with Baghdad and neighbouring countries over the peaceful secession of the region from Iraq. Baghdad has rejected talks.

The Kurds were left without a state of their own when the Ottoman Empire collapsed a century ago. Around 30 million live in Iraq, Turkey, Syria and Iran.

The Kurds say the referendum acknowledges their contribution in confronting Islamic State after it overwhelmed the Iraqi army.