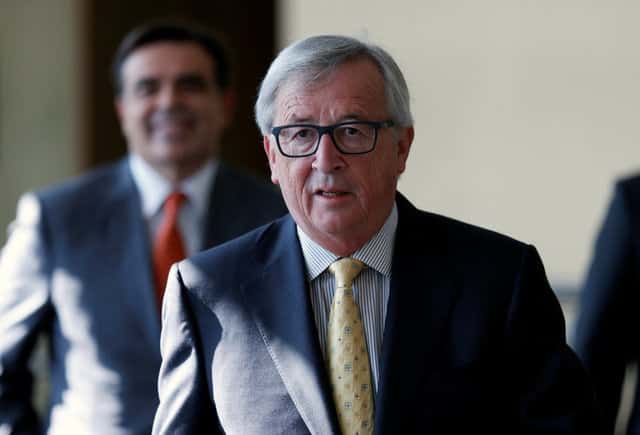 Only “miracles” can move Brexit talks far enough to fulfil Britain’s hopes of launching discussions next month on its future ties with the European Union, the head of the European Commission said on Friday.

Prime Minister Theresa May has been hoping to use an informal EU meeting in the Estonian capital Tallinn to harness what she describes as renewed goodwill over Brexit to push the talks beyond the terms of the divorce, now just 18 months away.

Britain had aimed to make a breakthrough at a summit in Brussels on Oct 19-20. Two years have been set aside for the Brexit talks and Britain risks crashing out of the 28-state bloc on March 29, 2019, without a deal on future trade terms.

But Jean-Claude Juncker, president of the EU executive and long a bogeyman for Britain’s eurosceptic press, said the first stage of talks on the rights of expatriates, the border with EU member Ireland and the financial settlement when Britain leaves had not gone far enough.

“By the end of October, we will not have sufficient progress,” Juncker told reporters in Tallinn, a day after his chief negotiator ended the last round of Brexit talks.

“At the end of this week, I am saying that there will be no sufficient progress from now until October unless miracles will happen.”

His words were echoed by other leaders, with Dutch Prime Minister Mark Rutte also saying both sides would need “a small miracle” to make the required progress before the October summit. Irish leader Leo Varadkar said it was “still very evident that there’s more work to be done”.

Their words will be a blow for May, who wants to move quickly on to discussion of the future trade relationship and a transitional arrangement — part of the deal Britain says is needed before any kind of financial settlement can be agreed.

In Tallinn, May sidestepped questions over whether she was confident of the October deadline.

After three months of talks which have become bogged down in a spat over the divorce bill, the British prime minister tried to reset the tone with a speech a week ago in Florence.

She had hoped to speak directly to EU leaders and reassure them Britain was not picking unnecessary fights, going as far as to make concessions on the future role of the European Court of Justice and on the Brexit bill.

“I made that speech to give momentum to the talks and I think we have seen that being shown in the talks that have taken place this week, and further progress has been made,” May said on Friday morning.

Pressing her case, she met German Chancellor Angela Merkel on the sidelines of the summit and repeated her pledge for Britain to be “the strongest friend and partner to the EU” after Brexit, her spokeswoman said.

“The PM pointed to the commitment made in her Florence speech to incorporate the agreement reached on citizens’ rights fully into UK law and make sure the UK courts can refer directly to it,” the spokeswoman said in a statement.

In a morning visit to Estonia’s Tapa military base, where 800 British troops are deployed as part of Nato’s efforts to defend against a newly assertive Russia, May said Britain was “unconditionally committed” to protecting Europe after Brexit.

By focusing on defence, May wants to show that Britain has something to offer its European neighbours. She will say she is ready to share British expertise — including through the National Cyber Security Centre (NCSC) — to help EU nations build up their own cybersecurity capability.

That, she hopes, could bolster her argument on the Brexit talks, and coax the EU into making concessions.

“A week ago I gave a speech in Florence which set out how we have made good progress so far, I thought we could make further progress and moving on to looking at the future deep and special relationship and partnership that we want to build with the European Union when the UK has left the EU,” she said after meeting the British troops.

“I set out what I thought was the future deep and special partnership we can build with the EU, and I look for the speech that I set out for that being reciprocated in proposals that the EU will come forward with.”