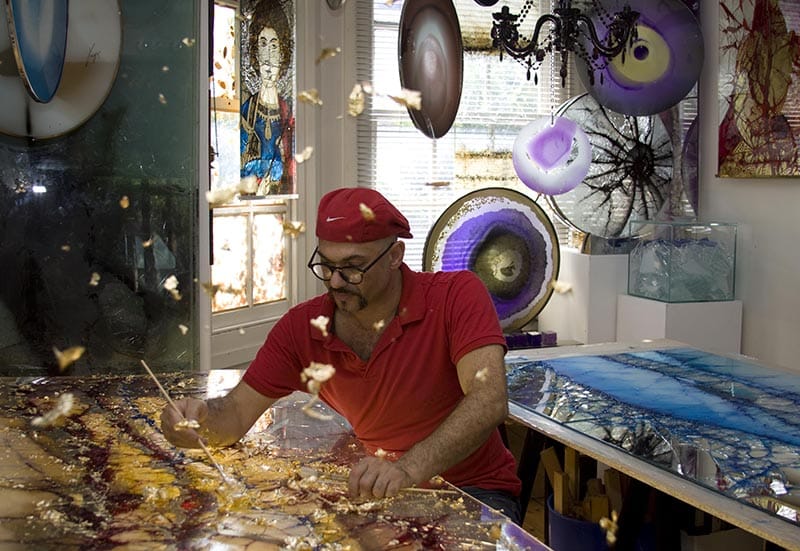 Where do you live?
With my partner Arjen. I spend approximately half the time in the house my family was renting as refugees after the Turkish invasion in North London. We later purchased the house. It’s full of family history. The other half we spend in the house where my father was born, in Kedares village, Paphos.

Best childhood memory?
Summers in London visiting my grandmother and brother, or maybe visiting London altogether. I fondly remember winter holidays with the making of a snowman in granny’s back garden.

Most frequented restaurant and absolute favourite dish? What food would you really turn your nose up to?
The Ottolenghi restaurants, and NOPI in particular, are my favourites. I love how they mix Middle Eastern flavours with a Western twist. My absolute favourite would probably be grilled octopus. I’ve tried hard to find something I wouldn’t eat and the only thing I could think of is cactus without the spines removed.

What did you have for breakfast?
Porridge with sultanas, banana, a drizzle of carob syrup and a generous sprinkle of cinnamon (the spice of love according to Vassilis in the film Politiki Kouzina).

Would you class yourself as a day or night person? What’s your idea of the perfect night/day out?
I am most definitely a morning person. I rise early. Very often I work with a freshness of mind before anyone else is awake. This is even more so when in Cyprus because of the early sunrise. The added advantage is that it’s a lot cooler in the morning. By midday my pace usually slows down. There is time for a siesta, some meditation or physical exercise. In Cyprus that means a dip in the sea, in London a trip to the gym. A perfect day out is beach combing, collecting sketchbook material…

Best book ever read?
The Alchemist by Paolo Coelho. I read this many years ago at a time when I needed it. It touched several spots on different levels. It’s a book that I have read several times and each time its simple philosophical and spiritual concept manages to touch me again and again.

Favourite film of all time?
Almadovar films are all high on my list of favourites. But if I had to pick one it would be Habla con Ella (Talk to Her). It’s an intelligent piece of story telling that leaves you with some hard to describe emotions.

Best holiday ever taken? What’s your dream trip?
The best holiday I ever took was to Australia. I enjoyed travelling up the east coast after having spent time in Sydney. But the highlight of that trip was scuba diving on the Great Barrier Reef. The magical, untouched underwater world has been very inspirational for my art.

What music are you listening to in the car at the moment?
When in Cyprus the music tends to be more Greek. My phone playlist starts with To Tango tis Nefelis by Harris Alexiou. It’s a song with strong emotional value to me as it was played at the cremation of my sister who passed away far too young.

What is always in your fridge?
Horseradish, home pickled capers and chorizo.

Dream house: rural retreat or urban dwelling? Where would it be, what would it be like?
Ideally one of each (which in fact I am lucky enough to have). But if I need to choose I would prefer the city. It would be London, of course. It would be rather small and minimalist in design. I need a bit of serenity to compensate for the messiness and chaos of the art studio.

If you could pick anyone at all (alive or dead) to go out for the evening with, who would it be?
I would give the world for one more night of tango dancing with my sister. Because I miss her.

If the world is ending in 24 hours what would you do?
I would cuddle.

What is your greatest fear?
To lose my sight. Not being able to see what I am creating would make my life pointless.

Tell me a joke…
I used to be a good teller of jokes, especially cheesy ones. But nowadays everyone around me seems to be laughtose intolerant.

Visit Yorgos’ studio as part of the Diadromes kai Ichni (Routes and Tracks) programme taking place on September 30 as part of Pafos2017 events. There is limited space so please call in advance on 26 955176 for reservations

Woman hospitalised after being hit on zebra crossing