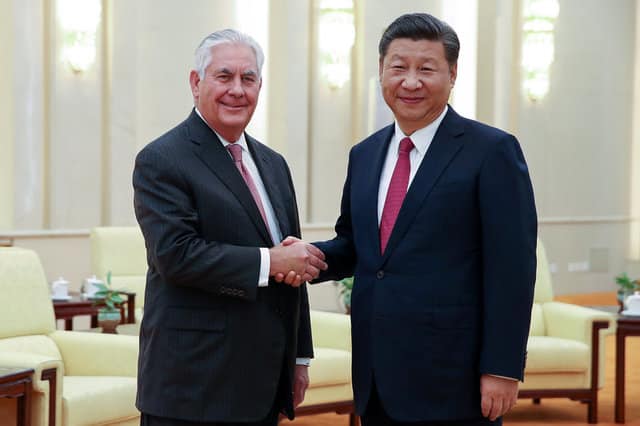 The United States is probing North Korea to see whether it is interested in dialogue and has multiple direct channels of communication with Pyongyang, US Secretary of State Rex Tillerson said on Saturday.

The disclosure came as Tillerson expressed hope for reducing tensions with North Korea, which is fast advancing toward its goal of developing a nuclear-tipped missile capable of hitting the US mainland.

US President Donald Trump has said he will never allow that to happen.

“We are probing, so stay tuned,” Tillerson told a small group of reporters during a trip to China. “We ask: ‘Would you like to talk?'”

He then said the United States had “a couple of, three channels open to Pyongyang.”

Tillerson’s remarks followed a day of meetings in Beijing, which has been alarmed by recent exchanges of war-like threats and personal insults between North Korean leader Kim Jong Un and Trump.

“I think the whole situation’s a bit overheated right now,” Tillerson said. “I think everyone would like for it to calm down.

“Obviously it would help if North Korea would stop firing off missiles. That’d calm things down a lot.”

South Korean officials have voiced concerns that North Korea could conduct more provocative acts near the anniversary of the founding of its communist party on Oct 10, or possibly when China holds its Communist Party Congress on Oct 18.

US officials including Tillerson say Beijing, after long accounting for some 90 per cent of North Korea’s foreign trade, appears increasingly willing to cut ties to its neighboir’s economy by adopting United Nations sanctions.

But to reach any diplomatic solution, Tillerson would still need to overcome some basic US assumptions about North Korea and China.

The first would be getting North Korea’s Kim to view nuclear weapons as a liability, not a strength. The US intelligence community does not believe he is likely to give up his weapons program willingly.

“(Tillerson’s) working against the unified view of our intelligence agencies, which say there’s no amount of pressure that can be put on them to stop,” Senator Bob Corker told a hearing at the chamber on Thursday.

The second big challenge for Tillerson would be getting China to impose economic sanctions on North Korea so harsh that Kim might question his future if they persisted.

US officials, speaking on condition of anonymity, say they believe Beijing’s priority is stability on the Korean peninsula, since a political collapse would almost certainly push destabilising waves of refugees into northeastern China.

Trump, who is due to visit China in November, has called for it to do more on North Korea and has promised to take steps to rebalance a trade relationship that his administration says puts US businesses at a disadvantage.

Chinese President Xi Jinping offered warm words for Trump while meeting Tillerson on Saturday, saying he expected the US president’s visit to be “wonderful.”

“The two of us have also maintained a good working relationship and personal friendship,” Xi said in comments in front of reporters.

Putin expected to proclaim annexation of Ukraine territory within days

As monster hurricane nears, Floridians told to hunker down