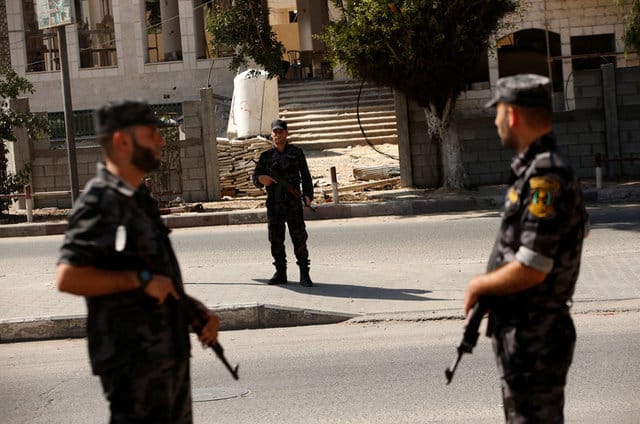 A decade on, Rawda al-Zaanoun is at last willing to forgive the gunmen who killed her son during the civil war that split Palestine. It has been painful, but she says it is time.

“He was hit with a bullet in the back. He was a martyr,” the 54-year-old said at an event in Gaza city to mark the public reconciliation of families of people killed in the war. “The decision was not easy because the blood of our son is precious. But we have given amnesty.

Her son Ala, a married father of two and an officer in the Palestinian Authority security forces, was killed in June 2007 after he rushed out of his house in Gaza City, having heard that his uncle was injured in clashes between rival Palestinian factions Hamas and Fatah.

Since that war a decade ago, Fatah, led by the secular heirs of Yassir Arafat, has run the West Bank, headed the internationally recognised Palestinian Authority and been responsible for all negotiations with Israel.

Its rivals, the Islamist group Hamas, an offshoot of the Muslim Brotherhood, drove Fatah out of Gaza and has run the tiny coastal strip that is home to 2 million people, nearly half of the population of the Palestinian territories.

The schism is set to end on Monday, when Hamas hands over control of Gaza to a unity government. Although it agreed to the arrangement three years ago, the decision to implement it now marks a striking reversal for Hamas, which is considered a terrorist group by Israel, the United States and most of the most powerful Arab countries.

“Hamas has made big concessions, and every coming concession will be stunning and surprisingly bigger than the one that passed, so that we can conclude reconciliation and this division must end,” the chief of Hamas in Gaza, Yehya Al-Sinwar, said during a meeting this week with social media activists.

If Hamas has swallowed a bitter pill by ending the feud, perhaps bitterest of all is the role played by exiled former Gaza security chief Mohammed Dahlan, once Hamas’s fiercest foe who is now a leading player in regional efforts to pull Gaza back into the Palestinian mainstream.

Officials on both sides of the Palestinian divide and in other Arab countries say Dahlan, based since 2011 in the United Arab Emirates, is behind an influx of cash to prop up Gaza, and a detente between Hamas and Arab states including Egypt.

His office did not respond to a Reuters request for comment.

Dahlan’s return to prominence could have consequences for Palestinian politics as profound as the reconciliation itself. As hated as he once was in Gaza for trying to uproot Hamas, he is perhaps even more reviled by the Fatah leadership in Ramallah for challenging the authority of President Mahmoud Abbas. Ambitious and charismatic, he has long been suspected of harbouring designs to succeed the 82-year-old Abbas.

FOR THE SAKE OF PALESTINE

Among the initiatives Dahlan has promoted in Gaza is the reconciliation programme of families like the Zaanouns and 19 others, who each accepted a $50,000 blood money payment from an Egyptian-Emirati charity fund in return for publicly renouncing the demand to avenge the deaths of their sons.

Old wounds will be hard to salve. Activists on both sides hold memories of their enemies shooting out kneecaps or torturing each other in partisan prisons.

He has also used a close relationship with Egyptian President Abdel Fattah al-Sisi in particular to regain his influence. Sisi, who took power by toppling a president from Hamas’s Muslim Brotherhood allies, controls Gaza’s only non-Israeli frontier and the keys to its prosperity.

“Dahlan worked hard, together with his contacts in Egyptian intelligence and sometimes with direct intervention from Sisi,” a Gulf source who asked not to be named told Reuters.

The strategy may be gaining him good will: an opinion poll last week by the West Bank-based Palestinian Center for Policy and Survey showed that those who still support Fatah in Gaza are shifting their loyalty to Dahlan. His popularity among Gazans, the survey said, has risen over the past nine months from nine to 23 percent.

The handover of Gaza suggests Dahlan’s allies in Egypt and the UAE realise that any bid to put the Palestinian house in order, for now at least, needs unity.

“Every time anyone speaks to (Israeli Prime Minister) Netanyahu, he would say how can you reach a solution when the Palestinians are splintered?” the Gulf source added.

“The reconciliation is an effort by several like-minded countries looking for a comprehensive solution,” he added.

Short of funds and friends, Hamas may have few options but to make concessions. For years it had modest but stable economic backing by Islamist-leaning Turkey and the wealthy Gulf Arab state of Qatar, where Hamas houses its headquarters.

But in recent months its friends, especially Qatar, have been on the back foot. Egypt, Saudi Arabia and the UAE have imposed an economic and diplomatic boycott on Doha over alleged support of terrorists, including, in their reckoning, Hamas.

Three conflicts with the Jewish state left many civilian neighbourhoods in Gaza pulverized. Rebuilding has been thwarted by the Israeli-Egyptian blockade, which Sisi has the power to ease.

Hamas figures blame Abbas, Fatah and Dahlan for encouraging Egypt and other Arab countries to keep the economic pressure on, forcing Hamas to agree to the reconciliation.

“One of our reasons was to spare our people this suffering which this time was made by Palestinian hands,” Hamas official Sami Abu Zuhri told Reuters.

Senior Fatah official Nasser al-Qidwa praised Hamas’s reconciliation moves and chalked up the group’s sudden change of tack to “the governance crisis that Hamas is living through and the crisis of foreign alliances, as well as the difficult conditions of some of Hamas’ traditional allies.”

Imposing its writ over policing Gaza and its borders will be the main challenge for the non-partisan cabinet of technocrats as it seeks to make this month’s unity initiative a reality.

Setting out a hard line, Prime Minister Rami Hamdallah said in a statement on Tuesday that Hamas must eventually cede all “crossings, security and government departments.”

Gaza bristles with hundreds of rockets belonging to Hamas’s armed wing, and the movement insisted that the arsenal it says is essential to confronting Israel will never be given up.

Hamas deputy political chief Musa Abu Marzooq conceded in an interview this month with pan-Arab newspaper al-Hayat that decisions to fight or make peace with Israel should be in future agreed jointly with Fatah.

But the movement, he suggested, would keep its finger on the trigger: “The subject of the resistance’s weapons … will not be on the table for dialogue.”

Over 460 people injured in Catalonia during referendum

First “I do” as same-sex marriage comes to Germany