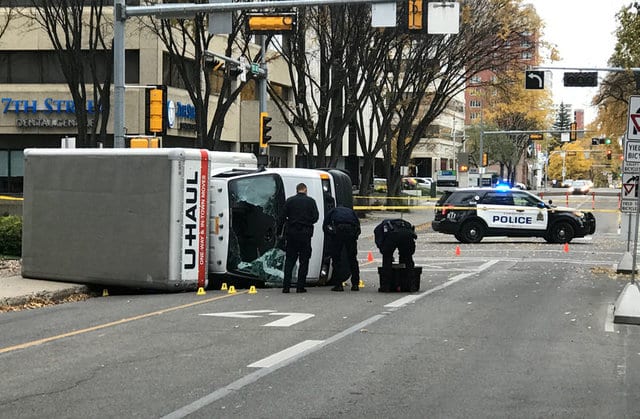 Edmonton Police investigate at the scene where a man hit pedestrians then flipped the U-Haul truck he was driving,

A Somali refugee who had been on a watch list over extremist views faced five counts of attempted murder and terror charges on Sunday after Canadian police said he stabbed a police officer and ran down four pedestrians with a car in Edmonton, Alberta.

The suspect, a 30-year-old man whom police did not identify, had been investigated two years ago for promoting extremist ideology but was not deemed a threat, the Royal Canadian Mounted Police (RCMP) said.

RCMP Assistant Commissioner Marlin Degrand said an “exhaustive investigation” into the man in 2015 did not uncover sufficient evidence to pursue charges.

Canadian media identified the suspect as Abdulahi Hasan Sharif, although Reuters was not immediately able to confirm his identity.

Police cordoned off an apartment block near downtown Edmonton and plainclothes officers were seen carrying large bags of equipment into the building.

The attacks in the western Canadian city began when a Chevy Malibu hit a police officer standing in front of a football stadium at about 8:15 p.m. Mountain time on Saturday (0215 GMT Sunday), sending him flying into the air.

The driver got out of the car and stabbed the officer multiple times before fleeing, according to police accounts and surveillance footage of the incident.

Police identified the suspect when he was stopped at a checkpoint and his license showed that he was the owner of the Malibu. He fled the checkpoint and was apprehended after a police chase across a downtown street, during which he hit four pedestrians.

A flag of the Islamic State militant group was found inside the Malibu, said Rod Knecht, police chief of Edmonton, Alberta’s provincial capital.

Edmonton Mayor Don Iveson told reporters: “To the best of our knowledge, this was a lone-wolf attack. There’s no immediate cause for panic or concern.”

U.S. national security agencies strongly leaned toward the conclusion that the suspect acted alone, although they were reviewing the matter, a U.S. official told Reuters.

The police officer, who had stab wounds to the head and face, was released from a hospital on Sunday along with two pedestrians. A third pedestrian was upgraded to stable from critical, while the fourth suffered a fractured skull and had regained consciousness.

On Sunday, two women were stabbed to death and their assailant shot dead by a soldier in the southern French port city of Marseille in what officials describe as a “likely terrorist act”.

Prime Minister Justin Trudeau called the Edmonton attack “another example of the hate that we must remain ever vigilant against.” Canada’s government said it would keep the terrorist threat level at medium, where it has been since late 2014.

The Alberta Muslim Public Affairs Council denounced the attack and hundreds attended a Sunday evening rally organized by the group.

“These types of acts, whether terrorism or not, seek to divide communities. We have to show that’s not going to happen, not in Edmonton,” said group spokesman Aurangzeb Qureshi.

Canada has been dealing in recent months with a surge in illegal border crossings by people seeking refugee status, which has renewed debate over whether it should tighten its borders.

The North American country has not experienced as much violence from extremist attacks as the United States and Western European nations, but there have been several deadly incidents in recent years.

In January, a French-Canadian university student was charged with murder after six people were shot and killed inside a Quebec City mosque, in what Trudeau called “a terrorist attack.”

In August 2016, Canadian police raided an Ontario home and killed Aaron Driver, who they said was an Islamic State supporter preparing an attack on a Canadian city with a homemade bomb.

In 2014, Canada was stunned by two deadly attacks that police said were the work of homegrown radicals and led to tougher new anti-terrorism measures.

A gunman killed a soldier at Ottawa’s national war memorial before launching an attack on the Canadian Parliament in October 2014. In the same week, a man ran down two soldiers in Quebec, killing one.

In 2015, a videotape attributed to al Shabaab, a Somali-based Islamist militant group behind a deadly 2013 attack on a Kenyan shopping center, threatened North American malls, including the West Edmonton Mall.

Protesters demand an end to Brexit at May’s Conservative conference

Catalan leader opens door to secession from Spain after vote