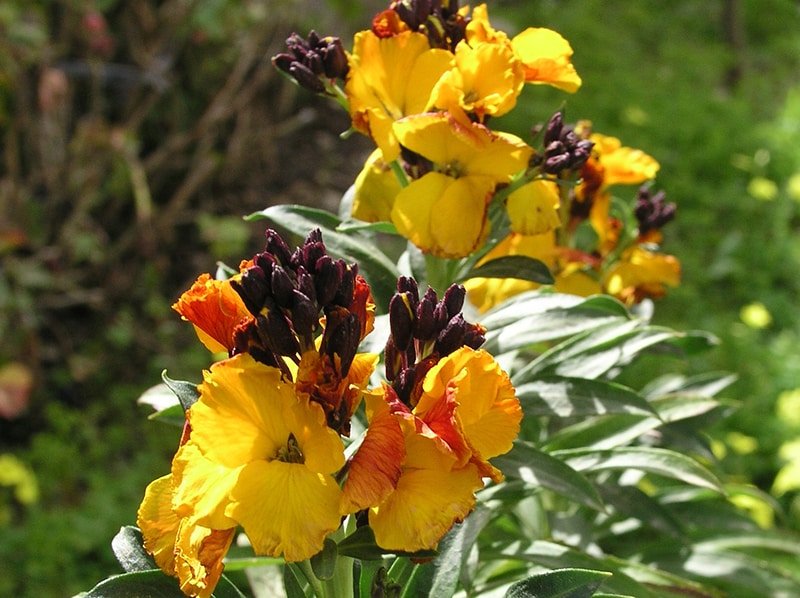 Perhaps, like me, you collect seeds all year round. The early flowering annuals like poppies and cerinthe have many seeds. Poppies shed their tiny seeds through holes in the tops of the seed capsules, from which when the seeds are ready they tumble out. The stems are best cut off at this point and the seeds, looking like grains of pepper, shaken into a paper bag. Cerinthe’s seeds are tucked away among its dying flowers, and you have to be quick to catch them before they fall to the ground and bury themselves in any loose soil, germinating in late summer.

Wallflowers, a springtime biennial and sometimes perennial here, produce their seeds within slim pods, which again split open and cast their seeds far and wide. Some plants don’t come true from seeds, and are probably hybrids, which is a seed of two different parents. It is likely that the dominant plant will be the one that evolves. A good example of this is the apple ‘Pink Lady’. At a recent garden talk someone had a grown a small apple tree from a sprouting seed from inside a Pink Lady apple. The questioner wanted to know if she would get Pink Lady apples from her tree eventually. The answer was no! The parents of this apple are Golden Delicious and Lady Williams, which were developed in Western Australia by John Cripps, who originally gave his name to the apple. It was later registered as Pink Lady but it is sometimes known as Cripps Pink, Lady in Red or Rosy Glow and they certainly do that on fruit shop shelves. So, she must wait to see which parent was the dominant one.

Later in the season there will be big round seeds from Caesalpinia and Tecoma stans trees, encased in hard pods and either on their own or helped by human hands, they break open and shed their dry seeds everywhere. As a result, you might find little trees appearing wherever they drop into fertile soil. This may be a bonus or not! The lovely lilac-flowering tree jacaranda produces many large seed-pods, looking rather like dried oyster shells and tucked between the outer cases is a seed. Pine trees produce seeds that are hidden inside the various layers of the cones and when the weather is dry and it is breezy, these seeds are released and they float on their wings in the air until they find some suitable soil in which to grow. Some plants produce seeds that are sticky, like plumbago, which stick to the fur of any animal or the clothing of a human passing by the bush. When brushed off, they will fall to the ground and germinate, eventually producing another plant.

Horse chestnut seeds, beloved by schoolchildren to play conkers with, but frowned upon nowadays for health and safety reasons, will eventually grow into huge trees, lasting for up to a hundred years or so. In countries where oak trees grow, the acorns drop and are usually collected by squirrels who bury them in the ground for winter feeding. Again, these seeds are minute compared to the eventual growth of the tree.

The seeds from prunus fruit trees are found amidst the soft fleshy part of the fruit, which when opened may have two seeds tucked inside. Pecans and walnuts also have a strong outer case that splits as the seeds are ready. The nuts inside the inner case are very soft when first harvested and need some weeks to harden and be enjoyed.

Generally, we don’t let the seed pods of bulbous plants such as daffodils, tulips hyacinths and much later on agapanthus appear as we want the plant to concentrate on building up the bulb for flowering again next season. Seeds from these plants may take many years to grow and produce flowers and anyway better plants are produced from bulbs. Stating the obvious, seeds are the way that plants reproduce themselves, although some plants like ferns, mosses and liverworts do not produce seeds. Remember that most seeds need a cold period (winter) before they germinate, so if you bought packets of them from a supermarket or garden centre or even collected them in your garden, pop them into the fridge for a few weeks before sowing, to give them a winter.

WHAT TO DO IN THE GARDEN IN OCTOBER

Whatever you call the season of fruits and mellow fruitfulness, it is fast approaching, which is a relief for the gardener as well as the garden! In many parts of the northern hemisphere as daylight hours become shorter and night temperatures start to drop, leaves begin to change colour and the first winds and rains of autumn will cause them to flutter down and rest in a thick rusty-golden carpet on the ground below. Here prunus and pecan trees begin to shed their now golden leaves and indeed need a cold spell to recover from the heat and produce new buds and leaves for next season. Unless there are storms and heavy rain, they will remain on the trees for some time yet. 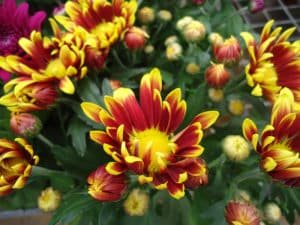 Looking around, plumbago is still throwing out long shoots of sky blue flowers. Bougainvilleas look handsome with cascades of brilliant colours everywhere and love the heat and humidity that is always on the coast. Polygala is resting but the pretty pink flowers of Leucophyllum frutescens, with its contrasting grey foliage, is flowering away. Hibiscus in all its forms continues to provide new flowers every day. They can cause a lot of litter but are worth the labour involved in looking after them. If you grow Caesalpinia (the Bird of Paradise tree) as a shrub you may find that it is still full of flowers, even this late on in the season.

Pomegranate fruits glow through the leaves this month and are exceedingly good for you and more beneficial than red wine or green tea. Take care not to get the juice on your clothes though, as it is the very devil to remove. Pyracantha is ablaze with berries in reds, oranges and yellows, although for some reason the birds don’t like yellow berries and tend to leave them alone and you just have to look at Melia azedarach trees to see great clusters of the yellow berries hanging there all winter. They are slightly narcotic and I think the birds have learned to give them a wide berth or in their drugged state, they would make easy pickings for cats! Lots of new growth is appearing on plants, which looked very dead, and I’m glad now that I didn’t dig them out of the flower beds.

If like me you previously planted cyclamen corms in a shaded spot under a tree or bush, then you may find their tiny leaves poking above the ground. The garden centres are full of potted chrysanthemums at this time of year, which will indeed grow in the garden too. After they have finished flowering cut off the dead heads and plant them in your flowerbeds for next year.

Plant of the Month Canna Lucifer

Monsieur Théodore Année of Passy France, a French diplomat, took some seeds of cannas back to France when he retired and in 1848 he crossed two cannas, and produced the first known and recorded Canna hybrid. This caused such a stir in France that other gardeners, including rose breeder Monsieur Antoine Crozy of Lyons, became enthused and started hybridising these plants. From 1862, he continued introducing new cultivars at a rapid rate until his death in 1903, giving his name to a new group of floriferous Canna cultivars. Canna ‘Lucifer’ belongs to that group, the Crozy Group. Canna, incidentally, is a Greek word for reed or cane. 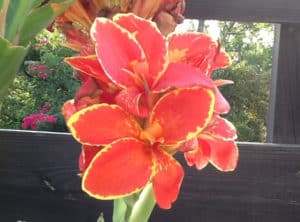 Cannas originated in Asia and Latin America, and later they were popular plants in Victorian Great Britain which were probably grown in hot houses. Although Canna lilies are normally a wetland plant and do not like to have dry roots, they will survive in Cyprus if they are well watered, so don’t let them dry out between waterings. Canna ‘Lucifer’, introduced in 1968 by Swiss Canna hybridiser H Faiss, likes to grow in full sun and is exceedingly hardy, but if it is grown in a pot, it would be advisable to bring it under cover during the winter. This medium sized plant grows to around a metre in height and has small, bright red flowers with a yellow edge around all parts. The attractive leaves are light green, around 25cm long and paddle shaped. Watch out for locusts who feed on them.

These rhizomatous herbaceous perennials are propagated by division as the flowers are usually sterile and do not make seeds. Divide the rootstock every three or four years as they will outgrow their pots quickly. They need a nitrogen-rich feed once a month to ensure continual flowering and leaf growth. They are sometimes susceptible to viruses, so watch your cannas carefully and destroy any that are suspect.