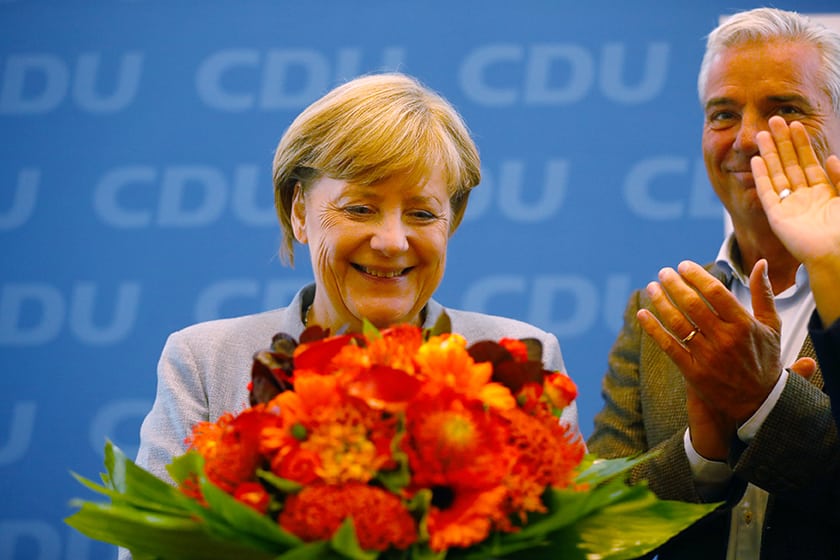 The damage done by the Nazis to Germany’s reputation as a civilised country last century was so bad that the Germans have had to be of good behaviour and keep the peace ever since World War II to purge the strange madness that gripped Germany between 1933 and 1945.

Welcoming refugees, championing human rights, eschewing nuclear power, avoiding military adventures and being a good European state have all been part of Germany’s road back from the militarism and barbarism of the Nazis that caused the death and destruction of millions of innocent people.

The loss of 94 seats to the Alternative fuer Deutschland party out of a total of 700 in last Sunday’s elections in Germany was a small price to pay for helping refugees, compared to the important strategic task of rebuilding Germany’s reputation as a civilised country at the heart of Europe. Angela Merkel said she has no regrets at all for letting in a million refugees from Syria and she is right. To most Germans, purging Germany of her Nazi past is as important as rebuilding Germany economically was after 1945 and German reunification in 1990.

Unfortunately East Germany – as the communist German Democratic Republic was known before 1990 –  never had a chance to rid itself properly of the ideology of her Nazi past in the same way as West Germany. In the film ‘The lives of Others’ we get a glimpse of the nature of the regime in East Germany and it was not a happy ship. The state had a right to spy on its citizens and unsurprisingly the right was abused and the regime was hated as much as it was feared.

As a result, Nazi ideology could only be suppressed in East Germany when it should have been eradicated root and branch. The regime could not denazify people it was oppressing, which explains why despite the fact that there are few Muslim refugees in East Germany most Neo Nazi supporters in Germany are to be found there.

The Alternative fuer Deutschland party is more anti-immigrant and anti-Muslim than Neo Nazi, but their ideologies overlap and unsurprisingly it received most of its support in the former East Germany in the elections last Sunday.

They are Germany’s answer to UKIP – a group of mostly eccentric opportunists posing as patriots with a single obsession that appeals to the lowest common denominator in human nature: intolerance of people who are different. At its most charitable it is a fear of ‘being swamped by immigrants’, but in the hands of unscrupulous demagogues this can and has turned nasty in the past.

After the war this Nazi indoctrination could not be purged in East Germany because the regime there had no moral authority or political legitimacy. In some circles it was regarded as even worse than the Nazis, not least because it was imposed by the Soviet Union. Neo Nazi parties are now resurfacing in East Germany and other countries in East Europe because Nazi ideology was not eradicated completely.

These Neo Nazi parties and their fellow travellers are doomed to fail because their time has passed. In Downfall, the first German film on the last days of Hitler in his bunker, a new confident Germany was able to kill off Nazi ideology once and for all.

And yet stereotypical doubts remain about Germany. It is more envy than distrust. Before German reunification British policy makers gathered at the prime minister’s country residence at Chequers to discuss the German character and whether German reunification was in Britain’s interests. It was argued that reunification was not in Britain’s interest, but as there was nothing that could be done to prevent it, Britain would adopt a pragmatic policy. The question today, however, is what would happen to peace and stability in Europe if Germany starts behaving like Britain.

Britain may have stood alone as the conscience of Europe in 1940 but she is now off on a frolic of her own, leaving Germany and France to guard European values. What’s done cannot be undone, but sometimes it helps to ask really big questions like what would be the effect of a German exit from the EU to concentrate the minds of people on the bigger picture.

The German election result returned a significant number of UKIP-type members of parliament. UKIP was primarily responsible for Brexit and the referendum in Britain was held to smother UKIP’s popularity among conservative voters. Since its German equivalent is also anti-immigrant and anti-European its successes last Sunday make it pertinent to ask what effect a German exit from the EU would have on the security and political stability of Europe.

The likelihood is that Germany will do no such thing. The two world wars last century had a more profound effect on continental Europe than in Britain, and the underlying idea behind the European project is the maintenance of peace through economic and political union.

The Christian Democrats are the largest party followed by the Social Democrats. The AfD is the third largest. Angela Merkel will probably form a coalition with the Free Democrats and the Greens and rule Germany for another four years at the end of which immigration will not be a major ‘concern, worry or anxiety’ in Germany.

Angela Merkel’s concern about the image of Germany is fully justified. National guilt for two world wars last century requires atonement practically, emotionally and psychologically. Germany admitted one million refugees because it is a confident civilised country with a chancellor who was stateswoman enough to do the right thing whatever the political consequences. Compare and contrast.

In years to come, welcoming one million refugees to Germany thereby redeeming Germany’s reputation as a civilised country will be Angela Merkel’s finest hour.