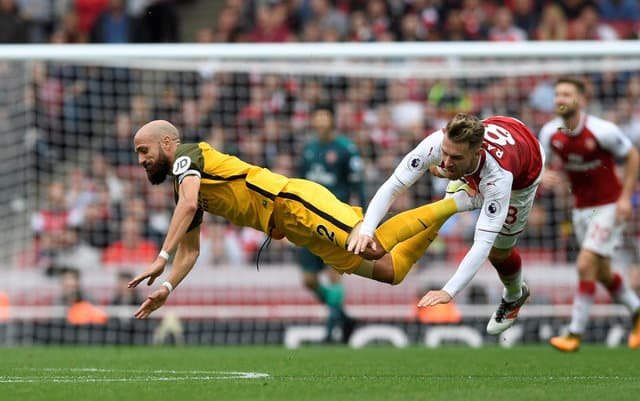 Arsenal maintained their perfect home record this season by comfortably beating Brighton & Hove Albion 2-0 at the Emirates Stadium in the Premier League’s early kickoff on Sunday.

On the 21st anniversary of his taking over as manager, Arsene Wenger made nine changes from the side who excelled in the Europa League on Thursday but Arsenal started at the same high-octane level.

After Alexandre Lacazette hit the post in the second minute, they took the lead on 16 when Nacho Monreal struck the ball firmly through a sea of bodies in the Brighton area.

he goal was only the Spaniard’s second in the league — and first for more than four years — and only a fine save from Brighton keeper Matt Ryan prevented Aaron Ramsey doubling their lead just before the interval.

Without the suspended Tomer Hemed, Brighton posed a limited attacking threat and a moment of brilliance from Alexis Sanchez, who backheeled the ball deftly in the penalty area, set up the second for Alex Iwobi on 56 minutes.

“It was a great team play. I didn’t think Alexis would find me but it shows the skill he has,” said Iwobi.

“He is capable of doing anything. To have eyes in the back of his head and backheel to me was amazing.”

Brighton manager Chris Hughon said: “It was a spirited performance. I can’t accuse the lads of not giving everything. It is always going to be difficult here, levels of concentration have to be for 90 minutes.”

Koeman’s troubles grow as Everton lose at home to Burnley

Oct 1 (Reuters) – Everton’s poor start to the season continued as they suffered a 1-0 defeat at home to Burnley on Sunday with Irish midfielder Jeff Hendrick grabbing a 21st minute winner.

Burnely are unbeaten away from home this season and move up to sixth in the league while Everton languish in 16th place with just two wins in this campaign so far.

Burnley’s goal came at the end of a 24-pass move with Hendrick skipping away from his marker and firing past Jordan Pickford.

Ronald Koeman’s Everton looked short of confidence and ideas and struggled to turn possession into chances even after the introduction of Wayne Rooney as a second-half substitute.

Juergen Klopp bemoaned Liverpool’s finishing after his side were held to a 1-1 draw at Newcastle United in the Premier League on Sunday.

Philippe Coutinho fired the visitors ahead with a superb 29th-minute strike, but poor defending and a lucky ricochet allowed Joselu to equalise seven minutes later.

Liverpool were unable to find a winner, despite dominating possession and creating 17 chances to Newcastle’s eight.

“I am disappointed, frustrated, whatever you want. We scored a wonderful goal and created wonderful chances,” Klopp told the BBC.

“We shot the ball over the goal even when it was empty. We created five or six outstanding, big chances. Usually we score with one of them. I didn’t see one more chances for Newcastle.

“If you don’t help yourself, no one else help you. It will be like this until we score. We play like this it makes sense that we play like this usually we score in situations like this. We have to accept this and carry on.”

Liverpool have now won just once in their past seven matches in all competitions and sit seventh in the Premier League, seven points adrift of leaders Manchester City.

Newcastle are ninth in the table, with 10 points from seven matches in their first season back in the top flight.

“When you get just one point at home we cannot be happy, but against a top six (team) like Liverpool, creating so many chances, you have to be a little bit happy,” manager Rafa Benitez said.

“If you see the points and see we are a promoted team, then we are pleased, but against Huddersfield (lost 1-0) and Brighton (lost 1-0) we could have done something more. We have what we have. We are happy with that.”