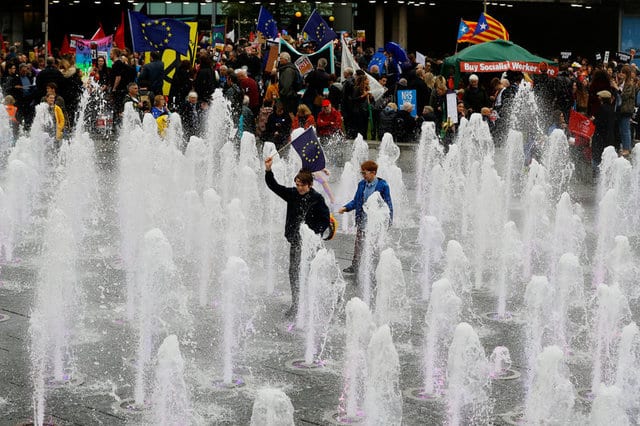 Demonstrators gather around a fountain on the opening day of the Conservative Party Conference, in Manchester, Britain October 1, 2017. REUTERS/Darren Staples

Chanting “Bollocks to Brexit” and waving the gold stars of the European Union flag, tens of thousands of protesters marched through Manchester on Sunday to the ruling Conservative Party’s annual conference to demand that Britain stay in the EU.

Protesters in the northern English city called on Prime Minister Theresa May to embrace closer ties with Europe, while a separate demonstration demanded that May go now. Helicopters hovered overhead amid a heavy police presence.

The country voted 52-48 percent in a referendum last year to leave the EU, but negotiations with Brussels have progressed slowly and the country remains divided over the outcome.

Finance minister Philip Hammond was greeted on his arrival with shouts of “Tory, Tory, Tory, Out, Out, Out,” by protesters who used the slang name for the Conservative party.

At the front of the demonstration, a lorry carried a multi-headed giant body with the faces of May and three leading Brexit campaigners: Foreign Secretary Boris Johnson; Environment Secretary Michael Gove and Brexit Secretary David Davis.

“Brexit is a monstrosity,” it said on the chest. “Let’s Stop It!”

Paolo Orrigo , 51, managing director of a business which imports goods from Italy, said he had voted Conservative all his life but was now switching to the pro-EU party, the Liberal Democrats.

“How am I supposed to import goods on WTO tariffs?” he told Reuters. “We are already seeing the effects. Brexit is a house built on sand. It will fall over, it is just a folly.

“Theresa May is a zombie. She is not going to last.”

May will try to stamp her authority on her party and the cabinet during the four-day conference, having lost her parliamentary majority with a botched election gamble in June.

At a separate demonstration, protesters denounced May’s policies on public spending and shouted: “Tories, out, out, out.”

“We want May out of power,” said Jo, who refused to give his surname and described himself as a communist.

“She is hanging on by a thread. We want Jeremy Corbyn elected as prime minister on a socialist manifesto with the collective ownership of industry, services and economic power.”

Britain’s opposition Labour Party enjoyed a bullish conference last week in Brighton and the party is closing the gap in the polls, helped by the support of young voters.

First “I do” as same-sex marriage comes to Germany