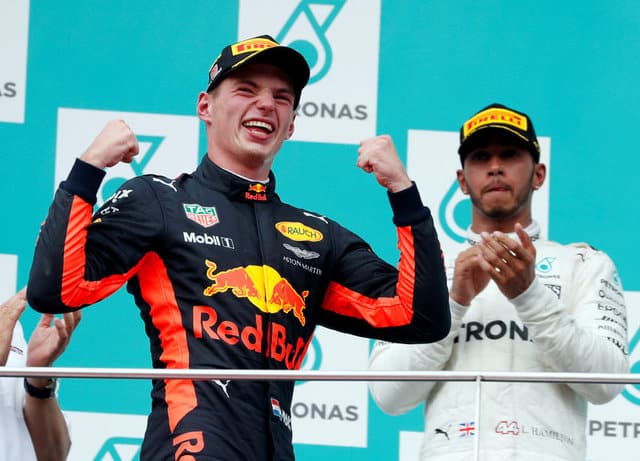 Hamilton, who had started on pole position, finished second for Mercedes with his Ferrari title rival Sebastian Vettel limiting the damage by racing from last place on the grid to fourth.

“Super, super job Max. Welcome to being a 20-year-old. Great start to a new decade for you, well done,” team boss Christian Horner said over the radio after his driver took the chequered flag 12.7 seconds clear of Hamilton.

The victory was the second of Verstappen’s grand prix career, after a first in Spain last year, and came a day after his birthday.

“Straight away the car felt good and I saw Lewis was struggling a bit with traction… of course he has more to lose than me in the championship so I went for it in turn one,” Verstappen said of his overtake on lap four.

“And from there on, I could do my own race. The car was unbelievable. I had pace. If I needed to speed up, I speeded up,” he added.

“It’s amazing, a very tough race but incredible to win.”

Vettel, whose team mate Kimi Raikkonen failed to start after qualifying second, was involved in a bizarre collision after the finish when the Williams of Canadian Lance Stroll ran into the back of the Ferrari.

The German’s car was badly damaged in the incident, limping along on three wheels, with Vettel then hitching a ride back to the pits on compatriot Pascal Wehrlein’s Sauber. Stewards decided to take no further action.

“I think he just didn’t look,” said Vettel, who set the fastest lap of the race, a day after he failed to complete a timed lap in qualifying due to an engine issue.

Eighth-placed finisher Stroll said he had just been driving slowly back to the pit lane: “It’s just a very strange incident. It wasn’t intentional for either of us,” the 18-year-old added.

Hamilton now has 281 points to Vettel’s 247 with five races remaining.

“They had the upper hand on us today. I feel good, but we have some work to do with the car. We didn’t have the pace this weekend. We have to keep pushing,” Hamilton said.

“I didn’t have any pace, that was the main issue. When I was trying harder, I struggled more. We need to get our stuff together,” Bottas lamented.

McLaren’s Stoffel Vandoorne matched the best result of his career with seventh place, ahead of Stroll and Brazil’s Felipe Massa for Williams.

Sunday’s race was Malaysia’s last, with organisers expecting a record turnout for the grand prix since it was first hosted by the Sepang Circuit in 1999.

The next round will be held in Suzuka, Japan on Oct. 8.