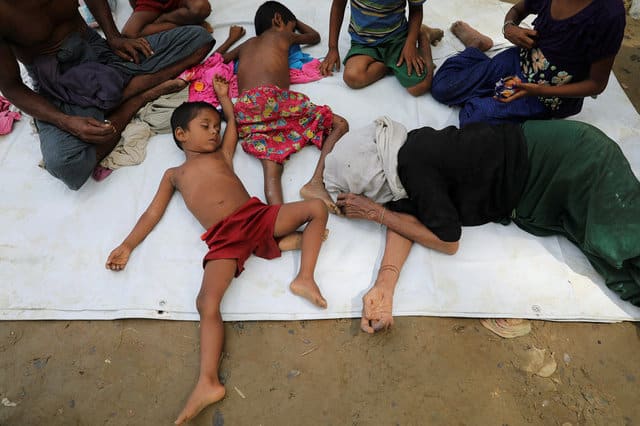 Rohingya refugees who arrived a day before from Myanmar rest at the Balukhali refugee camp near Cox's Bazar, Bangladesh, October 2, 2017. REUTERS/Mohammad Ponir Hossain

Bangladesh opened talks with neighbouring Myanmar on Monday with the aim of securing the return of more than half a million Rohingya Muslim refugees from Myanmar, most of whom have arrived since late August.

The United Nations has called the exodus of 507,000 Rohingya since Aug. 25 the world’s fastest-developing refugee emergency, and says Buddhist-majority Myanmar is engaging in ethnic cleansing against its Rohingya Muslim minority.

Myanmar rejects that. Its forces launched an offensive in the north of Rakhine state in response to coordinated attacks by Rohingya insurgents on Aug 25.

Myanmar blames the insurgents for attacks on civilians and for setting most of the fires that have reduced more than half of more than 400 Rohingya villages in the north of Rakhine to ashes. The insurgents deny that.

Myanmar says more than 500 people have been killed in the latest violence, most of them insurgents.

Bangladeshi Prime Minister Sheikh Hasina has called for an end to the violence and for safe zones to be set up in Myanmar to enable refugees to return.

She has also called for a UN fact-finding mission to go to Myanmar and for Myanmar to implement recommendations on solving problems in Rakhine drawn up by a team led by former UN secretary-general Kofi Annan.

Bangladesh would focus on those five proposals in talks in Dhaka on Monday between Foreign Minister Abul Hassan Mahmood Ali and Myanmar government official Kyaw Tint Swe, in particular the return of the refugees, a Bangladeshi foreign ministry official said.

“We don’t think this crisis is going to be resolved in just one meeting,” said the official who declined to be identified as he is not authorised to speak to media.

The crisis over Myanmar’s treatment of the Rohingya is the biggest problem national leader Aung San Suu Kyi has had to face since forming a government last year after winning a landmark election in late 2015.

The Nobel peace laureate, in an address to the nation last month, said Myanmar was ready to start a verification process under a 1993 agreement with Bangladesh and “refugees from this country will be accepted without any problem”.

There were already about 300,000 Rohingya refugees in Bangladesh before the latest exodus.

In Myanmar, the government took diplomats to Rakhine to let them see the situation.

“Maungdaw feels like a ghost town,” Swiss ambassador Paul Seger said on Twitter, as he arrived in a main town in the north of Rakhine.

Myanmar has blocked most aid workers and the media from the area despite calls from Western countries for access to deal with what aid groups fear is an unfolding humanitarian crisis on both sides of the border.

Suu Kyi has been accused by Western critics of not speaking out strongly enough on behalf of the long-persecuted minority and of defending the army action.

The Rohingya are denied citizenship and classified as illegal immigrants, despite claiming roots in Myanmar that go back centuries, with communities marginalised and occasionally subjected to communal violence.

Suu Kyi has no power over security policy under a military-drafted constitution and the public in Myanmar, where Buddhist nationalism has surged over recent years, largely supports the offensive against the insurgents.

The United States, in its strongest criticism of Myanmar over the crisis, called last week on countries to suspend providing weapons to Myanmar’s military. But it stopped short of threatening to reimpose sanctions, which were suspended under the Obama administration.

A protest against Western pressure and foreign media coverage of the crisis is planned in the biggest city of Yangon on Monday.

Myanmar has refused to grant access to a UN fact-finding mission but Suu Kyi appointed Annan last year to lead an advisory commission and propose solutions.

The commission presented its recommendations on August 24, a day before the insurgent attacks sparked the latest crisis, among them a review of a law that links citizenship and ethnicity and leaves most Rohingya stateless.

The panel also recommended that the government hold perpetrators of rights violations accountable, ensure the right to freedom of movement for everyone in Rakhine and invest in infrastructure to lift the state out of poverty.

Suu Kyi, in her address to the nation last month, said she was committed to the recommendations.