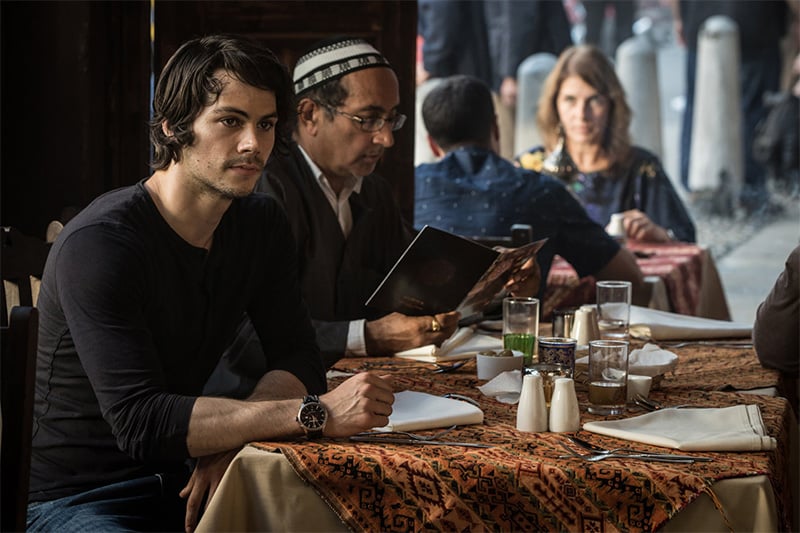 Who’d be an American assassin? Mitch Rapp would, and I bet you would too. You get to see the world, after all: Istanbul, Rome, a CIA safe house in Romania. You get to meet, and sometimes choke, beautiful women. You learn neat tricks, like stealing someone’s phone just by bumping into them briefly. And of course you get to kill terrorist scum, which is always awesome.

Mitch (Dylan O’Brien) is just a callow kid, proposing to his girlfriend on a beach in Ibiza – but then their beach hotel is stormed by a gang of bearded mullah types who kill lots of people, including the girlfriend (they also pump bullets into her dead body, as a parting gesture). ‘It’s just like that one time in Tunisia,’ thinks the audience, inured to this kind of thing by a diet of terrorist atrocities – but Mitch refuses to be so blasé, quitting school, learning Arabic, growing a beard and successfully infiltrating an Islamist cell (it’s not easy; he has to answer questions like “What was the name of the Prophet’s sister?”, which turns out to be a trick question). Mitch finds himself in a room with the chief Islamist, and prepares to take revenge – but then, fortunately or unfortunately, he’s beaten to the punch by the CIA, who’ve been monitoring the whole thing and reckon he’s a likely candidate for the fabled Orion programme.

Mitch is now an American assassin, this adaptation of a Vince Flynn novel being happy enough (like its British equivalent Stratton a few weeks ago) to countenance ‘our’ guys doing dodgy things in a good cause – though in fact he’s not yet Orion, having to pass stringent training under the eye of grizzled veteran Hurley (Michael Keaton). Hurley is a “warrior”, in fact he’s such a warrior that he still smokes cigarettes, ignoring the timid CIA bosses who urge him to put on a patch. Hurley knows the way to slit a man’s throat with the minimum of fuss, and puts his charges through an AR (Augmented Reality) final exam with electric shocks for those who get it wrong. “The enemy dresses like a deer and kills like a lion!” warns Hurley, though he doesn’t specify how deer like to dress. Suit and tie? Smart-casual? Maybe one of those Sherlock Holmes hats?

‘The enemy’ isn’t quite as expected, though. Don’t forget it was random militants who killed Mitch’s girlfriend – but the villains turn out to be state actors, specifically Iranian hardliners who want to build a bomb so they can start a nuclear war with Israel (yeah, right). American Assassin is a very violent movie (a graphic torture scene is primarily responsible for the ‘18’ rating) – yet it’s not too disturbing, mostly because it lives in the old world of predictable geopolitics instead of the new one of lone wolves and sleeper cells. Actually it doesn’t even do that, any real-world relevance dissipating in the final act as the baddie turns out to be Ghost (Taylor Kitsch), a gone-rogue agent with a grudge against the Agency and a big bomb with a ticking clock. This is trashy, airport-novel stuff, the climax hinging on whether Mitch will have the presence of mind to throw the bomb overboard. Chuck it, Mitch!

There’s an interesting theme buried in this mostly disposable movie. Hurley’s whole philosophy is to “never let it get personal”, which is why he tries to wean Mitch off his quest for revenge. (Once you make it personal, you’re no better than the fanatics.) “As soon as it starts to feel good,” cautions Mitch, “that’s when you stop being a professional.” This is the new face of war in America, typified in the doctrine of long-distance drones – an impersonal, arm’s-length kind of war, unlike the disastrous Iraq war (which the film alludes to). The American assassin is expected to be a machine – unlike Ghost, an assassin gone wrong who ‘makes it personal’ and becomes an all-out psycho.

What does the CIA do? “Kill people who need to be killed,” is Hurley’s answer. “You create monsters,” is Ghost’s answer. Both may be true – and the film has a certain ambivalent streak, for such a red-blooded action flick. Mitch’s story is generic enough, the angry boy who becomes Jason Bourne, but Ghost is another matter: “Thousands of Americans are gonna burn, all because of you!” he threatens at the end, the ‘American assassin’ having literally gained a double meaning as an assassin of Americans. Can you really create killing machines without also creating monsters? The film powers its way through shootings, stabbings, exploding cars, home invasions and torture scenes – but there’s still a touch of doubt at the back of its mind, then the climax brings out the whole cast for a mass singalong of ‘Who wants to be an American assassin? I don’t!’. No, not really.

Busy agenda at Rialto this October

Jagger calls Watts the rock that held the Rolling Stones together