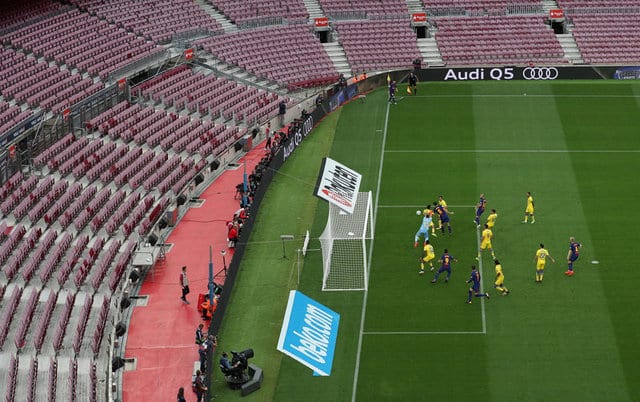 Barcelona’s Lionel Messi scored twice in a 3-0 win over Las Palmas on Sunday in a Liga match played without fans following clashes between police and voters in Catalonia over a banned independence referendum.

In the late game, Real Madrid earned their first home league victory of the season by beating Espanyol 2-0 with a goal in each half by midfielder Isco, while Valencia moved up to third in the standings after beating visitors Athletic Bilbao 3-2.

League leaders Barca tried to have their game postponed, but the request was turned down by La Liga and the Catalan club announced 25 minutes before kick-off that the game would be played behind closed doors.

Club president Josep Maria Bartomeu said the stadium was closed to show opposition to police violence against voters in Catalonia’s independence referendum, which was banned by the national government, and not over safety concerns.

Spanish riot police on Sunday burst into polling stations across Catalonia to try to halt the referendum on a split from Spain and Catalan officials said more than 800 people were injured in the crackdown.

Barca’s Sergio Busquets scored for the first time in the league in three seasons to give the hosts the lead in the 49th minute, leaping to head in a curling corner from Messi.

Argentine Messi then struck his 10th league goal of the season to double Barca’s advantage in the 70th.

He barely celebrated the strike, adding to an atmosphere more akin to a training ground exercise than a league game.

Messi then latched onto a pass from fellow forward Luis Suarez to pounce again in the 77th, sealing Barca’s seventh straight domestic league win this season and maintaining their 100 per cent start in La Liga and the Champions League.

Barcelona lead the standings on 21 points, five clear of Sevilla in second, while Real are fifth on 14. Valencia, with 15, climbed above Atletico Madrid on goal difference.

The bizarre circumstances of the Barcelona game appeared to affect the home side in the first half as they lacked energy and imagination, mustering only two shots on goal – an early strike from Sergi Roberto and a wayward header from Paulinho.

“It was very strange, of course it’s not normal, but today’s events overshadowed the game,” Busquets said on playing behind closed doors.

“Today was a special day, we had to focus on the sporting part, which wasn’t very nice for us, and we were affected by everything as other things were on our minds,” he added.

In Madrid, Isco made the most of a through ball from Cristiano Ronaldo to coolly fire under Pau Lopez and put Real ahead on the half-hour mark. A lapse from Madrid captain Sergio Ramos in the second half allowed Espanyol a chance to level but his blushes were saved by team mate Nacho, and moments later Isco killed off the Catalans.

Ronaldo again played an important role in the move, driving forward and slipping the ball out to Asensio, who cut it back for Isco to ram home low into the far bottom corner.

“Isco is playing with a lot of confidence, he knows he’s a more important player now, even though he always has been important, and he plays like he is on the street, he doesn’t have a care in the world and I like that” said Zidane.

The French coach also praised Ronaldo for his performance and said the Portuguese, who missed four league games through suspension, is desperate to get off the mark in La Liga.

“He’s not tired. He’s missed a lot of games and he’s very disappointed because he hasn’t scored in La Liga yet, but that’s football,” Zidane added. “His pass to Isco was phenomenal, and I hope things change in the next game.” (

Marseille suspect had been released by police before attack