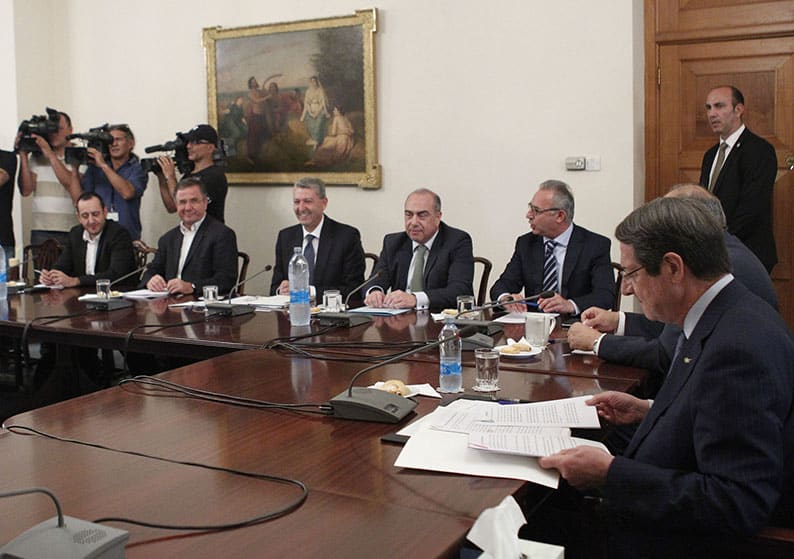 A National Council session in which President Nicos Anastasiades shared documents and briefed party leaders on the latest developments regarding the Cyprus problem, left opposition parties underwhelmed on Monday.

The session started at 10:30am and ended at noon.

On the agenda were Cyprus-problem related issues, including Anastasiades’ contacts in New York earlier this month on the sidelines of the United Nations’ General Assembly, and the secretary-general’s report on his good offices in Cyprus, an advance copy of which was leaked over the weekend.

In remarks after the session, Disy leader Averof Neophytou explained that the session had been relatively brief because the agenda included only developments since the last council session on August 1.

Main opposition Akel leader Andros Kyprianou expressed alarm at Turkey’s efforts that, if not addressed, will make finding a solution even harder.

“The president has shared some documents, which we will review, and will send some more,” Kyprianou said.

“The National Council will reconvene once the UNSG’s report is out so that it can discuss the issue comprehensively.”

Deputy Diko chief Marcos Kyprianou said he heard nothing he hadn’t already read about in the media.

“But documents we asked for were shared, and we have asked for the rest of them,” he said.

“As a general comment, we believe these sessions would be far more productive and useful if they preceded developments.”

Edek’s Marinos Sizopoulos said what happened in the talks was known and the question now is whether a new strategy will be adopted.

“It seems that the secretary-general will not assign any blame in his report,” he said.

“This is a new development that needs to be addressed. Edek’s view is that negotiations on the basis that the Cyprus problem is an inter-communal dispute must be ended.”

The Citizens’ Alliance leader Yiorgos Lillikas said the next session should not focus on assigning blame or acknowledging mistakes but look forward.

“What is urgently needed is a session to evaluate international and regional developments as they affect the Cyprus problem, like the Kurdish issue and Turkey’s reaction, the Catalan referendum, and so on, and what Turkey’s Plan B might look like so that we can pre-empt it,” he said.

The Greens’ Yiorgos Perdikis said Anastasiades’ “painful concessions” at the Switzerland talks were submitted either to expose Turkey’s intransigence or to facilitate an agreed solution, but they failed to manage either.

“The president’s reply was that these were made on a ‘subject-to’ basis,” Perdikis said.

“We believe it’s time [the president] made it clear to the UNSG that these concessions are no longer on the table and that any new negotiation must start from scratch.”