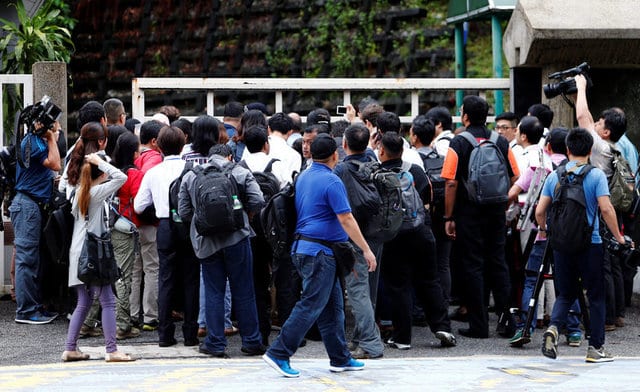 Journalists wait to enter the Shah Alam High Court, where Indonesian Siti Aisyah and Vietnamese Doan Thi Huong are on trial for the killing of Kim Jong Nam, the estranged half-brother of North Korea's leader, on the outskirts of Kuala Lumpur

Two women accused of assassinating the estranged half-brother of North Korean leader Kim Jong Un with a banned nerve agent pleaded not guilty at the start of a high-profile murder trial in a Malaysian court on Monday.

Indonesian Siti Aisyah, 25, and Doan Thi Huong, 28, a Vietnamese, are charged with killing Kim Jong Nam by smearing his face with VX, a chemical poison banned by the United Nations, at Kuala Lumpur’s international airport on Feb 13.

Police have also named four North Koreans as suspects in the case and an Interpol red notice, an international alert just short of an arrest warrant, has been issued for the North Koreans, who remain at large.

“The prank practice carried out by the first and second accused with the supervision of the four who are still at large was preparation to see through their common intention to kill the victim,” the prosecution said in its charge sheet.

Defence lawyers demanded that the prosecution immediately name the four other suspects, who have also been charged, so they could prepare their case.

Both women wore bullet-proof vests as they were led into the court on the outskirts of the Malaysian capital. They face the death penalty if convicted.

The two women nodded their heads when the charges were read out to them by two interpreters in the Shah Alam court on the outskirts of the Malaysian capital. The interpreters said both women pleaded not guilty.

The prosecution said their actions showed “intent to kill the victim” by smearing his face and eyes with VX nerve agent, which a post-mortem confirmed had killed Kim.

The women told their lawyers they did not know they were participating in a deadly attack and believed they were carrying out a prank for a reality TV show.

The two women sat quietly during the opening day of the trial. Siti was dressed in a black floral suit, while Huong wore a white long-sleeved t-shirt and jeans. The courtroom was packed with embassy officials and media.

Juliana Idris, who works at the airport, told the court a man later identified as Kim Jong Nam approached her and asked her to take him to a police station. Kim later went to the airport clinic but died there within 20 minutes.

She said the man, who spoke English, told her he had been “attacked by a woman from behind … another one closed his eyes”.

“His hands were shaking a bit, I don’t know why,” she said.

Police Lance Corporal Mohd Zulkarnain Sanudin, who was on duty at the Kuala Lumpur International airport on the day of the killing, said Idris had brought Kim Jong Nam to him.

He said Kim told him a substance had been wiped on his face. Kim’s eyes were red and he could see some liquid on his face, Zulkarnain said.

He also said the he had wrongly recorded Kim Jong Nam’s nationality as South Korean.

“The police report I made showed the nationality as South Korean, while on the passport, it was written DPR Korea, whereby I did not know what DPR meant. I was only sure that Korea was South Korea,” he told the court.

DPRK is the acronym for North Korea‘s official name, the Democratic Republic of North Korea.