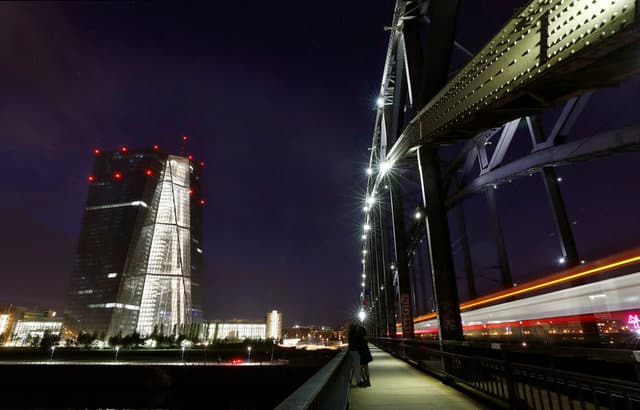 A commuter train passes over a bridge next to the headquarters of the European Central Bank (ECB) in Frankfurt, Germany

The European Central Bank plans to ask euro area banks to set aside more cash to cover bad loans, making it prohibitively expensive for lenders to keep sitting on them, a draft proposal seen by Reuters showed on Tuesday.

Soured loans are clogging up bank balance sheets and holding back lending – a headache for the ECB as weak credit growth offsets the stimulus it is trying to provide through low interest rates.

Starting January 1, it will give lenders two years to set aside funds to cover 100 per cent of the value of their newly classified non-performing unsecured debt and seven years to cover all secured bad debt, the draft showed.

The measures however will not affect the nearly €1tr worth of bad debt already on the books. The new measures are intended to prevent another bad debt pile from forming.

The problem for banks is that there is no effective market for non-performing loans, so selling the debt would result in big losses and force them to raise capital, a costly exercise given low bank valuations.

“The application of the backstops should not result in cliff-edge effects but should rather be implemented in a suitable gradual way by banks from the moment of NPE (“non-performing exposure”) classification until the moment when 100 percent prudential provisioning is expected,” the draft showed.

“For the secured backstop, banks should therefore assume at least a linear path for the backstop building up to 100 per cent over the seven years.”

The ECB declined to comment on the draft, which is dated Sept 1. It plans to release the guidelines on Wednesday, part of a broader push to prompt action.

Across the eurozone, banks had on average set aside enough money to cover 45 per cent of all non-performing exposures in the first quarter.

“A bank needs to be able to realise its security in a ‘timely manner’, the draft said. “If collateral has not been realised after a period of several years from the date when the underlying exposure was classified as non-performing, the collateral is deemed to be ineffective and as such, the exposure is treated as unsecured from a prudential perspective.”

Lenders in Italy, Greece and Cyprus have high volumes of non-performing loans.

Italian banks held €263bn worth at the end of the first quarter, with coverage at 48.5 per cent. In Greece, €101.8bn worth, or half of all loans, were classified as non-performing in the middle of the year, Bank of Greece data showed.

In the draft, the ECB said that while the guidelines were non-binding, banks were expected to explain any deviations.

“Banks should report on the compliance with the prudential provisioning backstop outlined in this addendum at least annually and explain deviations to the supervisor,” the draft said.

Government to report Turkey to UN for assimilating the north