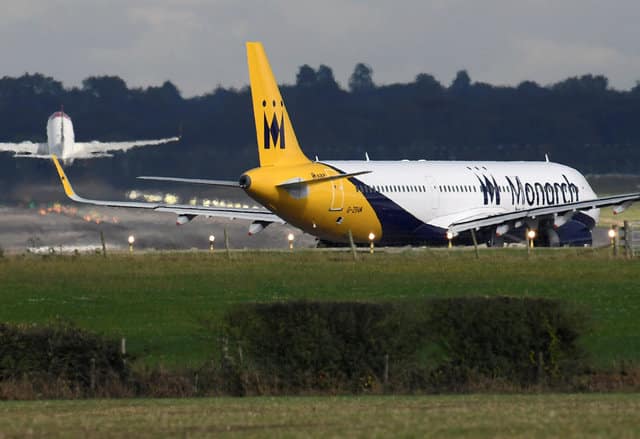 People stranded in Cyprus because of the sudden collapse of British airline Monarch are being flown back to Britain as promised by the UK government, but changes have been made to some of their flight itineraries.

In remarks on the issue of passengers stranded in Cyprus, Tourism Minister Yiorgos Lakkotrypis said on Tuesday that the process appears to be “under control”.

“The way in which passengers still on our island, as well as others elsewhere, are being repatriated seems to be quite organised,” he said.

He added that initial estimates suggest a total 15,000 tourists in Cyprus will be affected by year-end.
“We believe that the majority of these passengers will find a way to come to Cyprus because nearly every destination served by Monarch Airlines is served by other airlines,” Lakkotrypis said.

“There will possibly be some impact [on winter tourism to Cyprus], we don’t know to what extent, but we believe that most of these seats will be taken up by other airlines.”

Hermes Airports’ senior executive director Eleni Kalogirou said some 3,000 passengers who arrived with Monarch flights remain on the island and are being repatriated on other flights on their scheduled return dates.

“The good news is that the itineraries Monarch served are being served by other airlines, and some have already expressed interest in increasing their flights to fill the gap left by Monarch’s collapse,” she said.

The first flight from Larnaca to Luton was expected to leave as scheduled, at 10pm on Monday, but destination and time was later changed. The flight went to Stansted, from where people were expected to be transferred to Luton, but it finally left Larnaca more than two hours late, at 0.18am. This meant passengers arrived in Stansted at 3am local time.

The next scheduled flight, from Larnaca to Birmingham, was pushed back by three hours and finally arrived in the UK at 3am on Tuesday.

These types of changes are likely to continue in the near future. Another flight, this one from Paphos to Birmingham on Tuesday, will leave the airport two hours late.

According to the Press Association, Civil Aviation Authority (CAA) chief executive Andrew Haines said the “mammoth operation” to repatriate stranded passengers has “got off to a good start”.

“Given the unprecedented scale of this task, some disruption is inevitable. We thank everyone involved for their patience.”

Nearly 12,000 passengers were flown back to the UK on Monday, less than 24 hours after the 50-year-old company went bust, the UK news agency reported.

Sixty-one flights brought 11,843 passengers home from 24 holiday resorts on Monday, the CAA said, in what the government is calling Britain’s biggest peacetime repatriation.

On Tuesday, another 58 flights for 11,647 passengers have been arranged.

Before Monday, Monarch operated a total of 18 weekly flights to and from Larnaca and Paphos.

Information on Cyprus flights can be found on airport operator Hermes’ website http://www.hermesairports.com