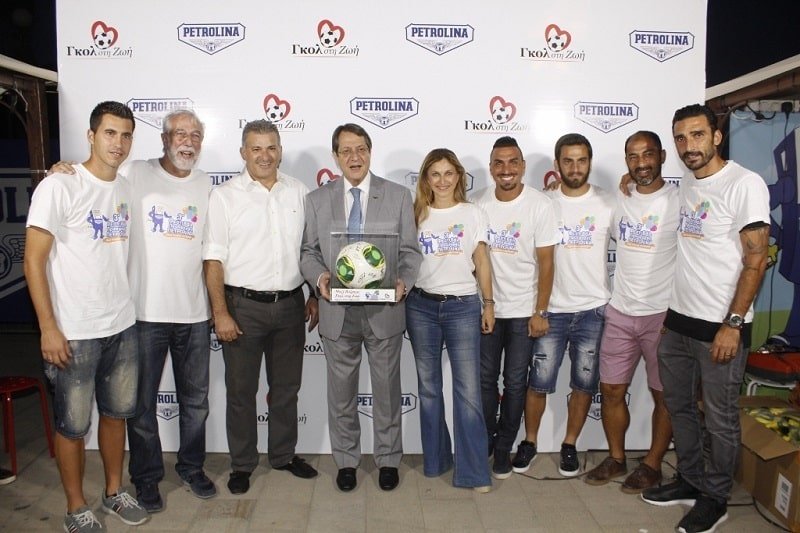 A vibrant atmosphere of love and friendship filled the Europe Square in Larnaca during the afternoon of Sunday September 24th, 2017. Thousands of people of all ages came together, including the President of the Republic of Cyprus, making the 3rd Petrolina Charity Festival a great success,   supporting the Charity-Volunteer organization ‘Goal in Life’.

The thousands who gathered in the square enjoyed wonderful moments in one of the largest entertaining and charitable events of the year, with the message “Together we score a Goal in Life”. The great reception from the public and the wholehearted efforts of more than 300 volunteers from the Petrolina Community, the Petrolina Kids Community and their friends, made the difference in the success of the 3rd Petrolina Charity Festival, which surpassed its target and aided in realizing the objectives set by ‘Goal in Life’.

Dozens of athletic activities and other forms of entertainment were part of this festival, including family games, which were set up in kiosks around the square, and the excellent and varied entertaining program, which was presented by Dimitris Oungarezos. The celebrations continued late into the evening with an exciting ONIRAMA concert.

Entrance and participation to the games was free, and all proceeds from the sales of food and drink will be donated to ‘Goal in Life’. PETROLINA also supported the aims of ‘Goal in Life’ with an added donation worth €15,000.  The cheque was presented to Konstantinos Charalambides, president of the organisation, during the event.

The festival was honoured by the presence of: the President of the Republic of Cyprus, Mr Nicos Anastasiades, the Minister of Justice and Public order, Mr Ionas Nicolaou, the Commissioner for Humanitarian Affairs Mr Fotis Fotiou, The Commissioner for Volunteerism Mr Giannakis Giannaki, the President of DISY, Mr Averof Neofytou, members of parliament, the mayors of Larnaca and Aradippou, the presidents of various organisations and many other officials. Additionally, many favourite football players from several teams took part in the festival by signing autographs and taking photographs with fans.

In his greeting at the event, President Anastasiades congratulated PETROLINA, which beyond its corporate activities and responsibilities, organises such outstanding events and makes a significant contribution to meeting the needs of the citizens. President Anastasiades also thanked the volunteers and participants who supported and brought life to the festival.

Mrs Georgia Lefkariti, Director of PETROLINA, in her address emphasised that “the spirit of volunteerism has been enthusiastically embraced by all members of staff at PETROLINA, who are an enormous example of generosity and who genuinely care for our fellow people, as shown through numerous of activities organised by PETROLINA supporting Cypriot society”.   Mrs Lefkariti thanked the mayor of Larnaca for his support of the Charity Festival, along with PPT Aviation Services Ltd and Bridgestone, and many other partners and companies who were part of the effort.

From ridiculous to sublime, Tite turns Brazil around