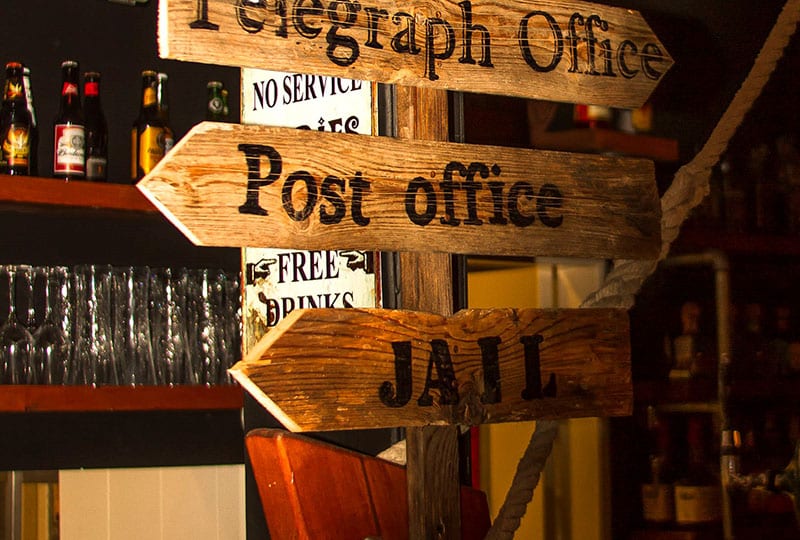 With its humble beginnings as a famous burger van trucking its way into the stomachs of folk around the island, Serial Griller decided to put down roots near the Ledra Palace (behind the temporary Municipality of Kyrenia). It’s idealistically off the beaten track, without light or noise pollution and with intriguing views; though you will have to look carefully for its front entrance!

Although now settled in one location it still has that free spirited trucker feel. With the backyard next to the buffer zone, there are no sounds of cars whizzing by, just the beats of rock, blues or country playing at a sociable level. A huge stage stands underneath the trees, overlooking the moat which has hosted numerous live bands and DJs. In fact, famous Greek DJ with the memorable grizzly voice Garavelas will be playing a two-day country fest on October 6 and 7.

Live events are not weekly standards, the bar tries to select gigs that suit the venue’s wild western ethos, their Facebook page will keep you informed of special nights. A screen behind the stage is part of a plan to play old western movies as background visuals.

Another thing that stands out about the venue, is its goal to introduce people to the intricacies of the union of beer and barbecue foods. One of the owners has had experience learning the art of barbecuing while in America. And in earnest, the burger and beer combo does not disappoint, even a cocktail loving, beer sneering woman.

Even though there is no cocktail list special cocktails are designed to suit events that may take place. There is however a huge choice of whisky, bourbon, tequila and of course beers. There’s also one type of red, white and rose wine available.

By the end of October the bar will offer 50 types of beer including Weiss, Porter, a wide variation of ciders and draught beers including Guinness. Their most popular beer is Grimbergen blonde, a Belgian beer which I was informed tastes very different when drank by itself and transforming into something else when accompanied with a barbecue dish. I’m not a beer fan but the fresh, crisp taste was a perfect accompaniment to the delicious homemade burger.

As whisky was available I met Fireball, a Canadian whisky liqueur blended with cinnamon, which allegedly doesn’t encourage a hangover. It’s sweet, spicy moreish and the cinnamon heats the throat on the way down.

Also amazingly, the venue doesn’t have a single TV screen, hallelujah! It holds approximately 150 people outside and 80 inside. The end of October will see people moving into the Wild West indoor section, with a joined and protected outdoor smoking area. I can imagine that it will be very cosy during colder months and a great place to lounge back and indulge in great beers, banter, bourbon, blues and burgers!