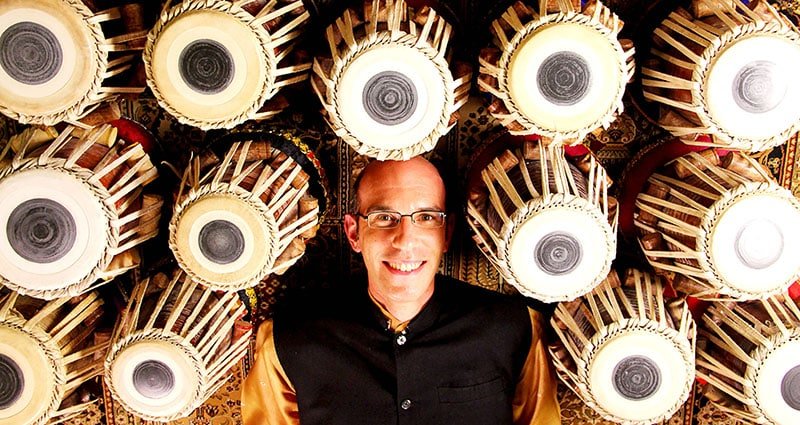 The ninth International Pharos Contemporary Music Festival continues on Sunday with a percussion performance by Shawn Mativetsky, one of the most dynamic performers of Indian Tablas in the world, at the Shoe Factory in Nicosia at 8.3pm.

Mativetsky, who is a pioneer in bridging the worlds of Western and Indian classical music, is described by the media as “an exceptional soloist” and “as a leading disciple of the renowned Pandit Sharda Sahai”. His instrument, the Tabla, is regarded as the king of the percussion instruments and it has a very distinct sound that makes it an integral part of Indian music.

Originally associated with the Indian classical dance Kathak, as well as the dance traditions of the Tawaifs (sophisticated courtesans during the Mughal rule in the mid-18th century), the Tabla (consisting of two drums, the Bayan and the Dayan) is now used in a variety of genres and styles of Hindustani music. In Northern India, the Tabla is a ubiquitous instrument which accompanies Hindu religious songs (Bhajan), Sikh linguistic performances (Shabad), the ritual music of the Sufis (Qawwali) and Arabic sonnets (Ghazals). Its sophistication and charm has attracted the attention of scholars, musicians and music lovers around the globe. The popularity of the Tabla as a solo instrument continually grows as time goes on, as the instrument can hold its melodic own for hours and yet not sound boring. It is a much sought-after instrument in cross-cultural and fusion musical experiments, and apart from classical music, the Tabla has made its mark on devotional, theatre and film music. For his recital in Cyprus, Mativetsky will perform traditional music as well as contemporary music written for the Tabla.

The Tabla will be in the hands of a performer who is in high demand as a performer and an educator, and who is active in the promotion of the Tabla and North Indian classical music through lectures, workshops, and performances all over the world.

Based in Montreal, Mativetsky teaches Tabla and percussion at the McGill University. Since 2003, he has been affiliated with the Pandit Ram Sahai Foundation (UK/India), and he hosted Tabla maestro Pandit Sharda in Sahai’s annual summer Tabla workshop. Since 2011, Shawn has been hosting his own annual summer Tabla workshop at the McGill University.

For his recital in Nicosia, Mativetsky will perform traditional music as well as contemporary music written for the Tabla.