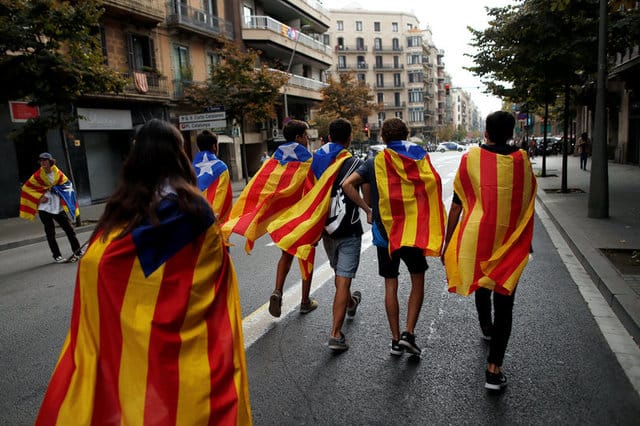 Spain apologised on Friday for a violent police crackdown on Catalonia’s independence referendum, in a conciliatory gesture as both sides looked for a way out of the nation’s worst political crisis since it became a democracy four decades ago.

Spain’s representative in north-east Catalonia, which accounts for a fifth of the national economy, made the apology just as Catalonia’s secessionist leader appeared to inch away from a plan to declare independence as early as Monday.

“When I see these images, and more so when I know people have been hit, pushed and even one person who was hospitalised, I can’t help but regret it and apologise on behalf of the officers that intervened,” Enric Millo said in a television interview.

Spanish police used batons and rubber bullets to stop people voting in Sunday’s referendum, which Madrid had banned as unconstitutional. The scenes brought worldwide condemnation and fanned separatist feeling but failed to prevent what the Catalan government described as an overwhelming yes vote.

Moments earlier, a Catalan parliament spokeswoman said the regional government’s leader, Carles Puigdemont, had asked to address lawmakers on Tuesday, in timing that appeared at odds with earlier plans to move an independence motion on Monday.

Puigdemont wanted to speak on the “political situation”.

The softer tone contrasted with remarks earlier on Friday from Catalonia’s head of foreign affairs who told BBC radio it would go ahead with an independence debate in the regional parliament.

Spanish Prime Minister Mariano Rajoy has offered all-party political talks to find a solution, opening the door to a deal giving Catalonia more autonomy. But he has ruled out independence and rejected a Catalan proposal for international mediation.

The stakes are high for the eurozone’s fourth-largest economy. Catalonia is the source of a huge chunk of its tax revenue and hosts multinationals from carmaker Volkswagen to drugs firm AstraZeneca.

Secession could also fuel separatist-nationalist divisions across the rest of Spain, which only this year saw ETA guerrillas in the northern Basque region lay down their arms after a campaign lasting almost half a century.

Spanish ruling-party lawmakers say Rajoy is considering invoking the constitution to dissolve the regional parliament and force fresh Catalan elections if the region’s government goes ahead with an independence declaration.

The spokeswoman for Catalan parliament said Puigdemont would speak in the assembly next Tuesday, with parliamentary leaders to meet on Friday at 1330 GMT to decide on the exact timing.

The Catalan government’s head of foreign affairs, Raul Romeva, told the BBC that the crisis could only be resolved with politics, not via judicial means.

“Every threat, every menace, using the police, using … the Constitutional Court has been useless in trying to (get) people from step back away from their legitimate rights,” he said.

His remarks hit Spanish stocks and bonds, including shares in the region’s two largest banks, Caixabank and Sabadell. Sabadell decided on Thursday to move its legal base to Alicante. Caixabank, Spain’s third-largest lender, will consider on Friday whether to also transfer its legal base away from Catalonia, a source said.

The court’s suspension order further aggravated one of the biggest crises to hit Spain since the establishment of democracy on the 1975 death of General Francisco Franco.

Secessionist Catalan politicians have pledged to unilaterally declare independence at Monday’s session after staging an independence referendum last Sunday. Madrid had banned the vote and sought to thwart it by sending in riot police.

In a separate development that could raise tensions, Catalan police chief Josep Lluis Trapero appeared in Spain’s High Court on Friday to answer accusations he committed sedition by failing to enforce a court ban on holding the referendum.

Unlike national police, Catalonia’s force, the Mossos d’Esquadra, did not use force to prevent people voting. Trapero has emerged as a hero for the pro-independence movement.

Spanish Economy Minister Luis de Guindos told Reuters in an interview on Thursday the turmoil was damaging Catalonia, an industrial and tourism powerhouse which accounts for a fifth of the national economy.

In addition, the central government on Friday passed a law to make it easier for companies to move their operations around the country just as some businesses consider leaving Catalonia, potentially dealing a blow to the region’s finances.

Opinion polls conducted before the vote suggest a minority of around 40 per cent of residents in Catalonia back independence. But a majority wanted a referendum to be held, and the violent police crackdown angered Catalans across the divide.

But turnout was only about 43 per cent as Catalans who favour remaining part of Spain mainly boycotted the ballot.

Woman in north murdered by ex-boyfriend