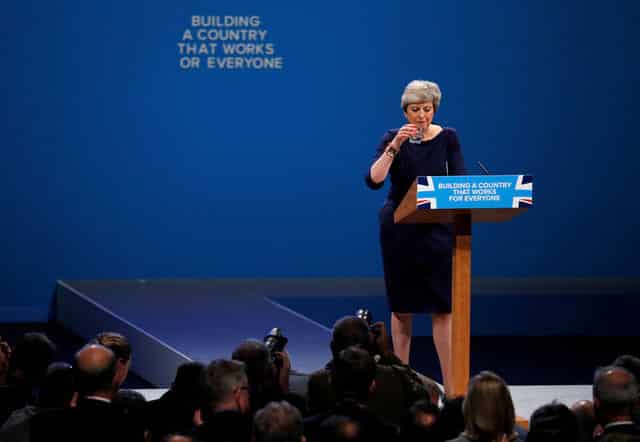 British Prime Minister Theresa May said on Friday she would stay on as leader to provide stability after a former chairman of her Conservative Party said he had garnered the support of 30 lawmakers who wanted her to quit.

May is trying to face down a rebellion by some of her own lawmakers just as Britain enters a crucial stage in Brexit talks, 18 months before the country leaves the European Union and must redefine its place in the world.

Some Conservative plotters say her authority is shattered beyond repair after a disastrous speech at her party’s conference, which comes after she called a snap election and lost her party its majority in parliament.

Speaking from her parliamentary constituency of Maidenhead in southern England, May said in a televised statement: “What the country needs is calm leadership and that’s what I’m providing with the full support of my cabinet.”

Senior ministers rallied around May, who has just over a year to agree a divorce deal with the EU ahead of Britain’s exit in March 2019. May said she planned to hold a scheduled meeting about Brexit with business leaders on Monday in Downing Street.

After May’s bungled election, her failure to unite the cabinet and a poor party conference “the writing is on the wall,” he said.

May’s authority was already diminished by her decision to call a snap election in June that lost her party its majority in parliament days before Brexit talks opened.

Though no Conservative ministers have publicly indicated any support for the plot, such a blunt demand for May to quit indicates the extent of her weakness while she attempts to navigate the intricacies of the negotiations to leave the EU.

Her survival has so far been dependent on the absence of an obvious successor who could unite the party and the fear of an election that many Conservatives think would let opposition Labour leader Jeremy Corbyn into power.

Sterling fell earlier in the day but then rallied by around a quarter of a cent against the US dollar following May’s remarks.

May’s speech to activists on Wednesday was ruined by coughing fits, a comedian handing her a bogus employment termination notice and by letters falling off the slogans on the set behind her.

She had hoped to use the speech to her party in the northern English city of Manchester to revive her premiership.

“Look, I’ve had a cold all this week,” May said, adding that she would be updating lawmakers next week on her Brexit plans and introducing a draft bill to cap domestic energy prices.

Shapps, who chaired the party between 2012 and 2015, said the plot to remove her existed before this week’s party conference and included both supporters and opponents of Brexit. He said the group did not have a unified view on who should replace May.

To trigger a formal leadership challenge, 48 Conservative lawmakers need to write to the chairman of the party’s so-called 1922 committee.

“Number 10 must be delighted to learn that it’s Grant Shapps leading this alleged coup,” Charles Walker, vice-chairman of the 1922 committee, told BBC radio.

“Grant has many talents, but one thing he doesn’t have is a following in the party, so really I think this is now just going to fizzle out to be perfectly honest.”

If May stays, talks on leaving the European Union will be guided by one of the weakest leaders in recent British history. EU diplomats and officials expressed astonishment about the uncertainty in London.

Supporters, including her most senior ministers, said she should remain in charge to deliver Brexit.

Under the headline ‘Theresa May will stay as Prime Minister and get the job done,’ interior minister Amber Rudd wrote in The Telegraph newspaper that “she should stay”. May’s de facto deputy Damian Green said she would carry on. Environment Secretary Michael Gove also said he hoped she would continue.

“I know that she is as determined as ever to get on with the job, she sees it as her duty to do so and she will carry on and she will make a success of this government,” Green, the first secretary of state, told BBC television.

Many Conservative activists fear a leadership contest would exacerbate the divide in the party over Europe, an issue that helped sink the previous three Conservative prime ministers – David Cameron, John Major and Margaret Thatcher.

A leadership contest could also pave the way for an election that some Conservatives worry could be won by Corbyn, whom they cast as a Marxist who would reverse decades of free market policies.

“The Conservatives have no plan for Britain and their posturing will not deliver the change our country is crying out for,” Corbyn said on Friday.