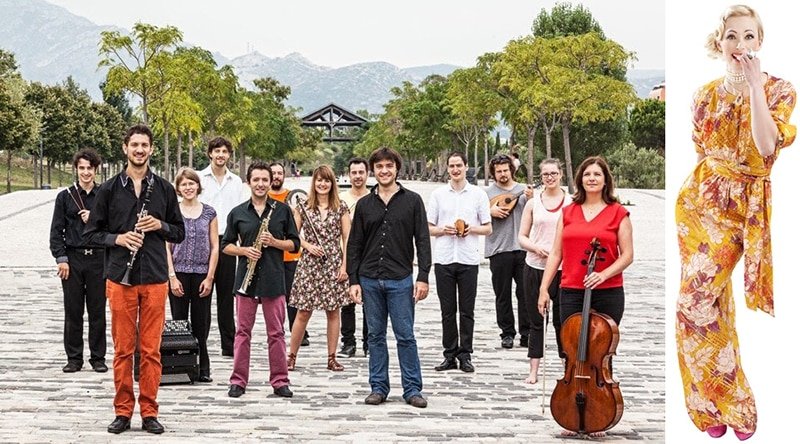 C Barre is an instrumental ensemble founded and directed by Sebastian Boin, and is the result of an encounter between 12 ingenious musicians. The ensemble is currently associated with the National Centre for Musical Creation of Marseille. The makeup of the Ensemble is unrivalled (clarinet, saxophone, trumpet, percussion, accordion, mandolin, guitar, harp, cimbalom, keyboards, cello and double-bass) and is enriched by the dynamism and thirst for experimentation of its musicians. Furthermore, the Ensemble regularly takes on other instruments (chromatic zithers or third-tone zithers, the bouzouki, the electric guitar, baroque instruments, traditional instruments or new instruments invented for the occasion). For the concert in Nicosia, the ensemble will incorporate the bouzouki, the Armenian Duduk and zithers.

Given its very specific nature, C Barre dedicates much of its time to music creation. This is often seen in the form of isolated commissions, but also as long-term collaborations with a number of composers. These relationships allow for a deep understanding of aspects of the creative process, form and genre, and the frequent participation of other art forms such as dance, literature, poetry, video and sculpture.

In the last few years, Ensemble C Barre has performed at the Philharmonie de Paris, Festival of Île de France, Radio France, Festival of Marseille, Festival Les Musiques, the Grand Theatre de Provence, among others. Animated by a desire to bring contemporary music to a larger audience, the Ensemble also undertakes a number of educational programmes.

Joining the ensemble will be Sun, one of the foremost leading interpreters in contemporary music. She began her training in the Bel Canto style and eventually shifted to contemporary music, appearing under the baton of conductors such as Sir Simon Rattle and Thomas Hengelbrock, with orchestras such as the Berlin Philharmonic, Leipzig Gewandhaus, Philharmonic Orchestra Dresden and the Tokyo-Symphony Orchestra. She appears regularly with ensembles such as musikFabrik Koln, Ensemble Modern, Mosaik or Intercontemporain and string quartets such as Diotima, Arditti, Signum and Minguet. Sun has appeared at prestigious opera houses and between 2007 and 2014 she was the first soprano of the Neue Vocalsolisten Stuttgart. Besides Lied, Opera and Oratorio, her repertoire includes more than 700 works from the 20th and 21st centuries.

Ryan Gosling praised Harrison Ford after working with him

Denmark set to become next European country to ban burqas