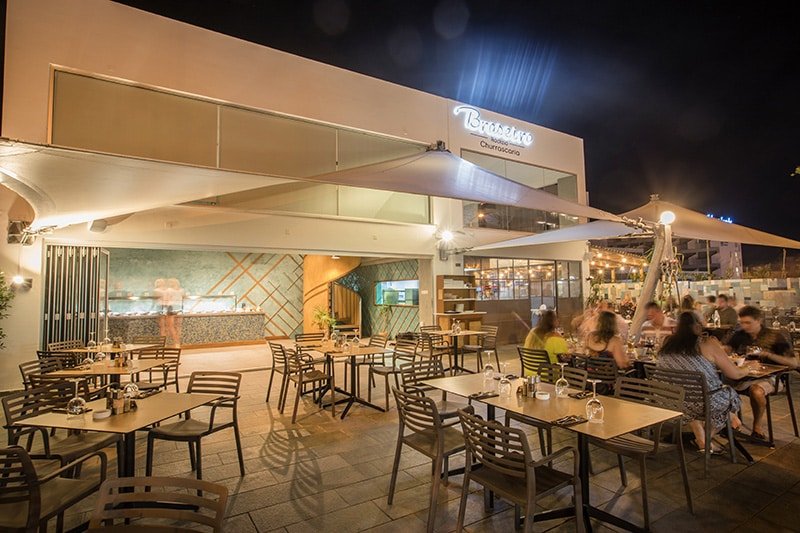 With the summer drawing itself out, day trips to Protaras are still on the agenda. We were craving a hearty meal and having been recommended a Brazilian restaurant decided it would be a good opportunity to give it a go.

The concept at Braseiro Rodizio is that freshly barbecued meat is brought to the table and sliced directly on to your plate, hot off the skewer! Approaching the restaurant, we could hear the music and it created a pleasant atmosphere. While it had a smart, modern look about it, there wasn’t a Brazilian feel to the place. The outside seating was spacious, it didn’t feel as though they had crammed in as many tables as possible and as a result, it felt quite comfortable! We were promptly brought menus, which listed a good selection of cocktails. However, we were impressed to see lots of local wines and opted for a Shiraz, to complement the red meats we were expecting.

We were then pointed in the direction of the buffet salad bar, to choose our own accompaniments to the meal. The salad bar had a wide range of dishes to choose from, from crabstick to bean salad, so it was with great difficulty I did not over-fill my plate! While plating our salad we were enjoying the music, Spanish, not Brazilian in the end but it was fun and put us all in a good mood.

We got back to the table and found a nice surprise: crispy, very well-seasoned, hand-cut chips and mini cheese breads waiting for us to sample. We could also smell the tantalising aroma of meat being barbecued. A few short minutes later the first of the meats arrived at the table – sizzling, crisp, chicken drumsticks. They were so tender that the chicken literally fell off the bone. Having experienced this, we were eager to taste whatever might be coming next!

Tender gammon steak arrived. The friendly waiter sliced the meat, which we had to help off the skewer with little tongs that were provided. The food came thick and fast. Spiced beef, peppered pork, chorizo, lamb and different variations of steak such as rib eye and sirloin. All the meat was cooked to perfection. Crisp on the outside and slightly pink on the inside. Some of it so soft that our knives just glided through it and it melted in our mouths. There wasn’t one cut of meat that fell far from delicious! In fact, my partner enjoyed the Picanha, a top sirloin, so much she asked if we might have a second round, yet despite an affirmative answer (and another plea from her!), she was left a little disappointed when they continued serving the other meats instead.

As the evening progressed the restaurant started to fill up and there was a livelier feel about the place but as more people arrived, the steady flow of food that had been brought to our table slowed down. This was not a complete disaster, as we had already managed to sample most of the different types of meat on offer, however we did wonder how the experience may have panned out had we not started our experience when the restaurant was empty.

While the meat was very good, some of it was quite similar. The cuts of beef, for example, were difficult to tell apart. Luckily, there were a couple of different seasonings on the table so we could mix it up a bit but what was lacking was some good, Brazilian sauces made by the chefs at the restaurant. There were store bought condiments on offer on one end of the buffet, but they were not in keeping with the theme.

Soon after informing the waiter that we were full and that we couldn’t possibly eat any more meat, we were asked if we would like to sample one more thing, a Brazilian treat – pineapple coated in cinnamon, then cooked on the barbecue. We couldn’t say no to something so exotic. It arrived and, once again, was sliced off onto our plates. It was refreshing and seemed the perfect dessert, having had a rather heavy meal.

All in all I would recommend going to Braseiro. The experience of having the food served in a unique way is enough to give it a try. The food was fresh, well-cooked and in abundance. Add to that, that it was reasonably priced so, we felt as though we definitely got our money’s worth.