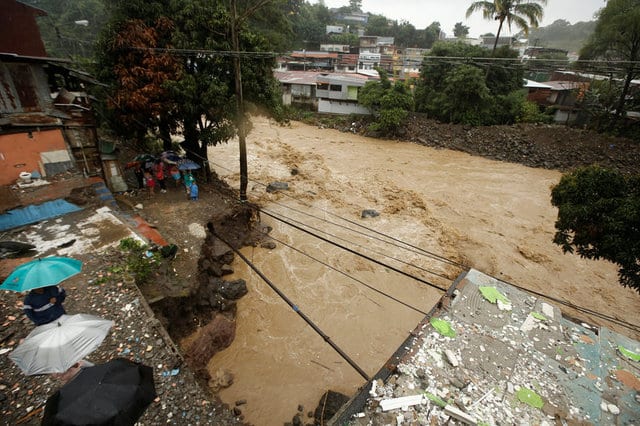 Tropical Storm Nate killed at least 22 people in Central America on Thursday as it pummeled the region with heavy rain while heading toward Mexico’s Caribbean resorts and the U.S. Gulf Coast, where it could strike as a hurricane this weekend.

In Nicaragua, at least 11 people died, seven others were reported missing and thousands had to evacuate homes because of flooding, said the country’s vice president Rosario Murillo.

Emergency officials in Costa Rica reported that at least eight people were killed due to the lashing rain, including two children. Another 17 people were missing, while more than 7,000 had to take refuge from Nate in shelters, authorities said.

Two youths also drowned in Honduras due to the sudden swell in a river, while a man was killed in a mud slide in El Salvador and another person was missing, emergency services said.

“Sometimes we think we think we can cross a river and the hardest thing to understand is that we must wait,” Nicaragua’s Murillo told state radio, warning people to avoid dangerous waters. “It’s better to be late than not to get there at all.”

Costa Rica’s government declared a state of emergency, closing schools and all other non-essential services.

Highways in the country were closed due to mudslides and power outages were also reported in parts of country, where authorities deployed more than 3,500 police.

The Miami-based National Hurricane Center (NHC) said Nate could produce as much as 15 inches (38 cm) in some areas of Nicaragua, where schools were also closed.

Nate is predicted to strengthen into a Category 1 hurricane by the time it hits the U.S. Gulf Coast on Sunday, NHC spokesman Dennis Feltgen said.

Blowing maximum sustained winds of 40 mph (64 kph), Nate was expected to move across eastern Honduras on Thursday and enter the northwestern Caribbean Sea through the night.

The storm will be near hurricane intensity when it approaches Mexico’s Yucatan Peninsula late on Friday, where up to 8 inches (20 cm) of rain were possible, the NHC said.

The NHC said a hurricane watch was issued from Morgan City, Louisiana, to the Mississippi-Alabama border, including metropolitan New Orleans, Lake Pontchartrain, and Lake Maurepas.

U.S. officials from Florida to Texas told residents on Thursday to prepare for the storm. A state of emergency was declared for 29 Florida counties and the city of New Orleans.

“The threat of the impact is increasing, so folks along the northern Gulf Coast should be paying attention to this thing,” the NHC’s Feltgen said.

In Mississippi, the U.S. Environmental Protection Agency plans to release as a precautionary measure 40 million gallons (151 million liters) of acidic water from storage ponds at a Pascagoula waste site.

The release to a drainage bayou is intended to prevent a greater spill during the storm, the EPA said, adding there are no anticipated impacts to the environment.

About 14.6 percent of U.S. Gulf of Mexico oil production and 6.4 percent of natural gas production was offline on Thursday, the U.S. Department of the Interior’s Bureau of Safety and Environmental Enforcement said.

Mercedes in search of lost speed at Suzuka