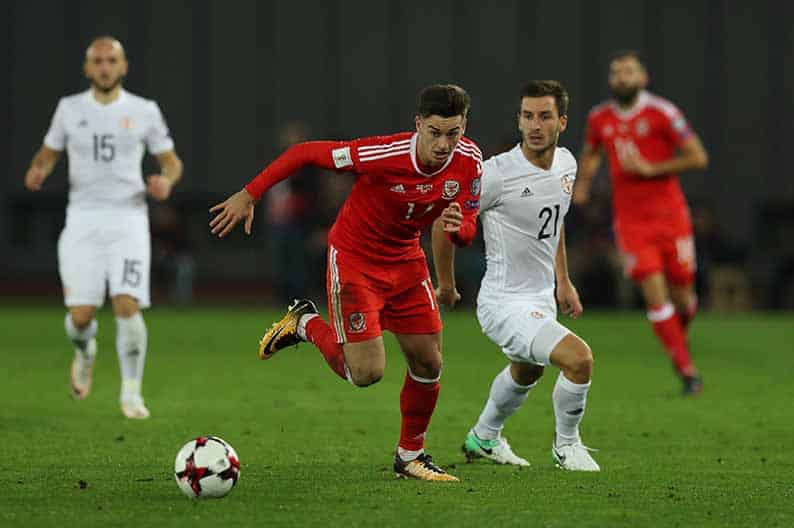 Wales secured a vital 1-0 victory in Georgia to keep their hopes of automatic World Cup qualification alive on Friday as Tom Lawrence sealed the points with his first goal for his country.

Lawrence lashed home right-footed from just outside the area in the 49th minute to earn Wales only their fourth victory in nine qualifying games and put them clear in second spot in Group D with 17 points, a point behind leaders Serbia who suffered a shock 3-2 loss at fourth-placed Austria.

Serbia are still favourites to win the group with a final home game against Georgia on Monday, while Wales play third-placed Ireland in what looks like becoming a shoot-out to see who finishes as runners-up to claim a probable playoff spot.

Wales, bidding to reach the World Cup finals for the first time since 1958, would be guaranteed at least runners-up spot in the group providing they avoid defeat against Ireland.

However, victory for either side would see them top the group if Serbia lost their final game.

“I always knew this was going to be a tight group and always thought it would go the wire,” Wales manager Chris Coleman said.

“All we can do is work hard and take care of our business. We have a huge test on Monday night against the Republic of Ireland. We have a game plan and we will see where it takes us.”

An added complication is that even a runners-up spot might not be enough to secure a two-legged playoff.

Only the eight runners-up with the best records from the nine European groups will take part in the playoffs.

Unbeaten Wales were ninth best going into the match in Tbilisi but victory lifted them to sixth in that complex table.

Without Bale, Wales produced a disciplined performance against a tricky Georgian side who drew 1-1 in Cardiff — one of five draws for Coleman’s team.

Chances were few and far between but Derby County’s Lawrence produced a quality finish to break the deadlock.

Turning into space 30 metres out he advanced before firing a powerful drive across Georgia keeper Giorgi Loria.

There were nerves at the end as Georgia pressed for an equaliser — their best chance coming when a superb pass sliced open the Welsh defence to leave Otar Kakabadze in the clear but he elected to cross rather than shoot and wasted the chance.

“We are halfway there,” Wales midfielder Aaron Ramsey said.

“We wanted to finish with two wins. Hopefully we can give our fans something to cheer about on Monday.”