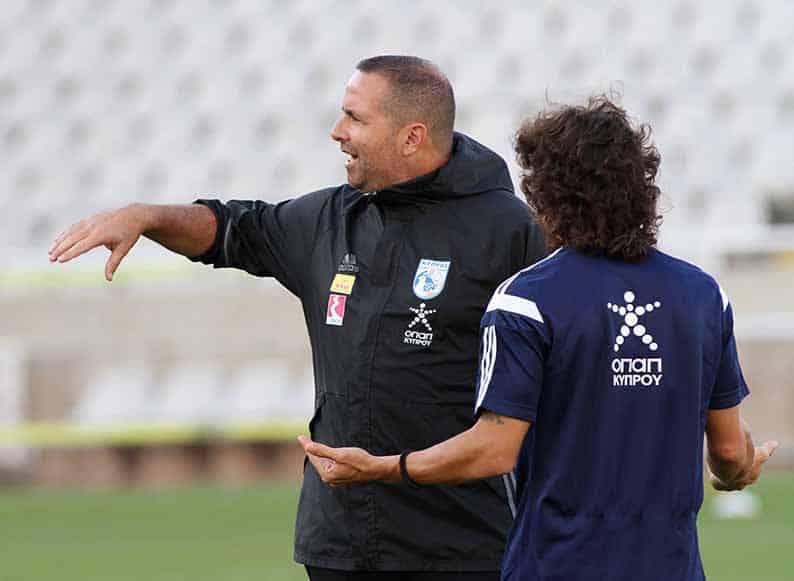 THE Cypriot national team welcomes neighbours Greece to Nicosia on Saturday for the second from last game of the 2018 FIFA World Cup qualifying campaign.

With just two games to go in Group H, Cyprus is in fourth place, three points behind Greece who lie just one point behind Bosnia and Herzegovina who, in turn, occupy the second qualifying position.

In the last round of international games, Cyprus got off to a winning start under new manager Ran Ben Shimon with an impressive 3-2 turnaround against Bosnia. Yet an injury-time 1-0 defeat to Estonia means Cyprus’ chances of qualifying are slim to none.

Greece, however, are still in with a very real chance, as a win on Saturday coupled with a loss for Bosnia against runaway group leaders Belgium in Sarajevo will see Michael Skibbe’s side enter the last game against lowly Gibraltar needing just a win to finish second.

Greece striker Apostolos Vellios said that his side will be hoping for a favour from the Red Devils in their match against their nearest group rivals.

“We expect and hope that Bosnia will lose points against Belgium,” the 25-year-old stated, though he added that, “first of all we are looking to win our matches”.

Vellios continued: “The atmosphere within the squad is excellent. We are like a family with the new manager and that is evident on the pitch. We are going all out to win our two matches and, of course, we will wait to see what our rivals do, but we will focus on our own games”.

The friendly relationship between Cyprus and Greece is well-known, but winger Andreas Avraam is disappointed with claims that his team will go easy on Greece to help them qualify.

“We have our own pride and our own identity,” the AEL man told Astra 92.8. “It is a game that we want to win. We respect Greece, but we believe in ourselves”.

“We are annoyed about what is being said because it suggests that we do not respect ourselves. We are going out for the win,” he insisted.

Despite Cyprus’ slim chances of progressing to the World Cup, star striker Pieros Soteriou is not ready to give up on his team’s hopes just yet.

“The spirit of the national team is very good. We are going out there to win on Saturday. The same way they (Greece) have a chance to qualify, so do we, and we will fight until the end,” said the FC Copenhagen centre-forward.

“As long as we are still in it mathematically, we believe we can do it and get the result that we deserve,” he told Radio Proto.

A big miss for Cyprus is the continued absence of Apoel winger Giorgos Efrem who continues his recovery from an injury picked up in his club’s Champions League qualifying campaign.

The latest meeting came last year – a 2-0 home win for Greece courtesy of goals from Kostas Mitroglou and Petros Mandalos.

Greece have won the last four encounters between the two nations, with Cyprus’ last success against their neighbours coming back in 2001, as a late goal from Ioakim Ioakim handed the islanders a memorable 1-2 win in Athens.

Crowds at the GSP this qualifying campaign have been rather modest but the fact the interest on the island in Greek football could see a larger than usual turnout.

Cyprus solution is up to the parties – UN Spokesman

‘Will to learn vital in tennis as well as in life,’ says Baghdatis