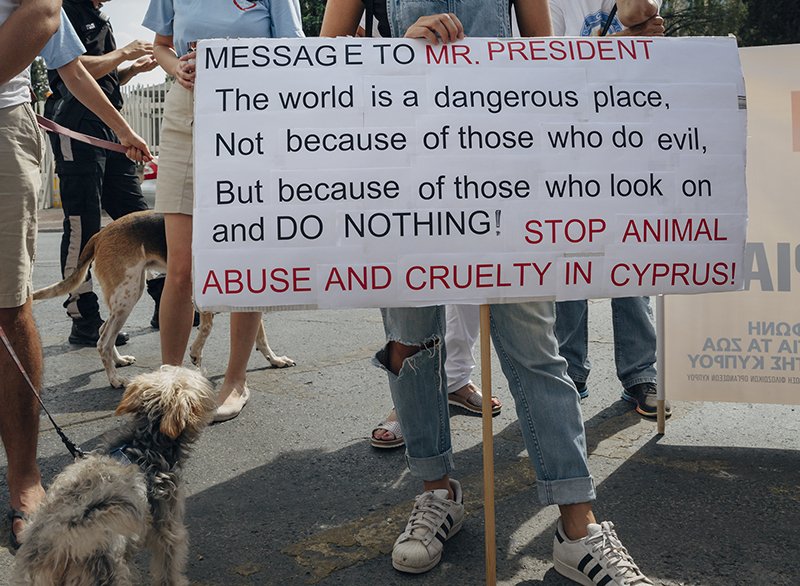 Scores of people and members of animal welfare organisations marched on Saturday to the Presidential Palace in Nicosia with their pets and placards demanding more government funds in support of animal shelters and harsher penalties for animal abusers.

The protesters, with photos of poisoned or tortured dogs, delivered a memo addressed to President Nicos Anastasiades along with a male stray puppy to Volunteerism Commissioner, Yiannis Yiannaki. The puppy, given the symbolic name Elpidas (Hope), is one of ten that were abandoned along with their mother.

Yiannaki, holding Elpidas in his arms, urged members of the public to adopt rescue dogs from shelters.

The memo, signed by the Union of Animal Welfare Organisations, expressed discontent over the ongoing lack of policy for the protection and welfare of animals.

Despite welcoming the support measures Anastasiades announced earlier in the week, volunteers said it was too little, too late. They said however, that they are expecting for them to be implemented.

“We are tired of picking up poisoned animals, nursing abused (animals) and collecting kittens and puppies in nylon bags and paper boxes from dumpsters and fields,” the memo said.

They also ask for government funding to the tune of €100,000 per year for at least five years to neuter and spray stray animals, and for subsidised programmes for microchipping dogs.

The group also demanded the government and the House pick up the pace as regards all pending bills on animal welfare that provide for harsher penalties for those convicted for crimes against animals. They also call for a well-trained animal police, and for the establishment of an independent animal welfare control service with animal shelters and vet clinics in each district.

Yiannaki admitted that as regards animal welfare the state has been unable to cope, while in many cases the solutions provided have proven to be ineffective.

He said he was certain that with cooperation with animal welfare groups, the implementation of integrated policies would be possible.

The new measures announced by the president, he said, would help effectively tackle these problems.
Anastasiades announced earlier in the week that a new bill is being prepared to create a police department which will deal with animal protection, while cabinet has also agreed that an animal welfare body will fall under the responsibility of the volunteer commissioner to put an end to the existing complications with different responsibilities falling under different ministries.

In August, cabinet approved a €75,000 budget for additional financial assistance towards the stray animals neutering scheme. The additional amount will bring the total budget for the scheme to €125,000.

Unions to decide on strike action on Tuesday