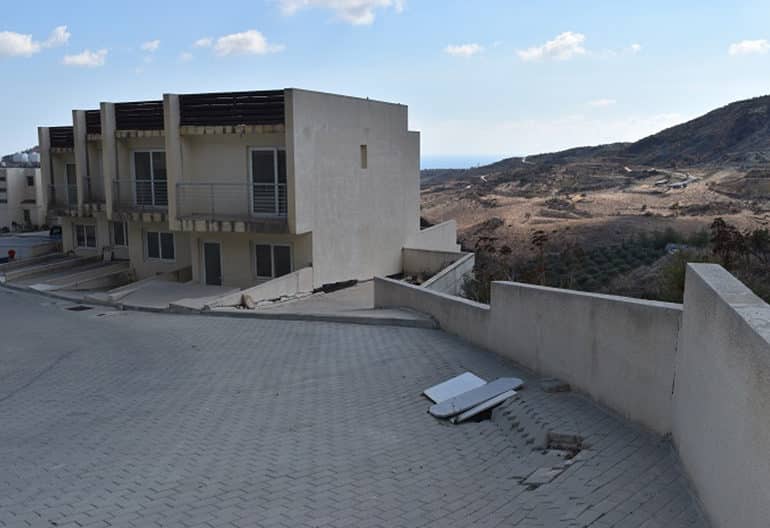 THE authorities have finally stepped in to help residents of the misnamed and blighted Paradise Hills, a housing development in Marathounda Paphos, to prevent a repetition of last winter’s heavy flooding caused by a rainwater drainage pipe positioned right above the site.

Last winter, tens of thousands of litres of water gushed out of the drainage pipe and backed up behind the site’s retaining wall, putting huge pressure on the structure and causing flooding, ground erosion and subsidence all the way down the site.

The pipe is just one of many other structural and legal issues the homeowners have struggled with since the developer went bust in 2009.

“I have asked for it (the pipe) to be investigated, and a detailed report made to see what can be done,” director of the public works department, Chrystalla Malloupa, informed the Sunday Mail on Wednesday.

On Thursday, representatives from the public works department in Nicosia, along with the chief engineer for Paphos and other staff members, visited the site and spoke with resident, Lance Hames.

“The chief engineer from Paphos explained that they will take advantage of the works underway in Marathounda and block off the pipe and re-direct it into a storm pipe which will carry water away to the bottom of the village and away from the residential areas,” he said.

Currently large areas of the lower part of the village are being dug up to install new water pipes for a nearby golf course.

Lance’s wife, Tracy Hames, and neighbour, Yvonne Ackrill, contacted the Sunday Mail in desperation this week to highlight their concerns that the onset of winter would mean heavy rain would carve a huge gully even deeper into the soil and, like last year, pour in torrents all of the way down the site destroying driveways, walls and paving, flooding into homes, ruining floors, furniture and soft furnishings in its wake.

The residents have visited the Paphos public works department on a number of occasions to request that the pipe to be moved, to no avail.

If successful, this week’s move would be one small victory for homeowners who have been fighting for nearly a decade to get the site finished and obtain their title deeds.

Owners have appealed to the authorities to move the pipe for more than a year, said Hames

Wife Tracey said that the pressure and levels of stress caused by all of the problems at the site are insurmountable at times and has placed a terrible strain on her marriage.

“Coming here from the UK was our dream, but it’s turned into an absolute nightmare and it’s making me unwell,” she said.

The drainage pipe was installed illegally after the homes had been bought and on a plot that had also belonged to now defunct developers MDB.

“There was supposed to be a house on this site, in fact it is the one depicted on the sign advertising the development,” said Hames.

‘Paradise Hills’ development contains 49 units Most of the properties were sold to British buyers.

In 2009, the developer, MDB Properties Limited was dissolved and the company went into provisional liquidation before the estate was finished. Paradise Hills has also featured on ITV’s Holiday Homes from Hell programme.

Ahead of her departure back to the UK this week, UK resident Ackrill said she had to stack and cover in plastic, the entire contents of her apartment, in case of flooding again.

Last winter whilst staying at her newly refurbished apartment, heavy December rain obliterated all of the completed work and she had to spend her last night in Cyprus at a hotel.

“Water was pouring into my new kitchen and I had to employ a builder and plumber to sort it all out, there was significant water damage to everything, I am terrified this will happen again,” she said.

An initial run-off pipe behind the site was closed off following complaints from Paradise Hills that the water was eroding the site, but six months later, the current pipe was installed next to the site of the first one and on private property, said Hames.

“We have just been going round in circles and from every angle we are being ignored and forgotten about. No-one will help us and we have no idea what is going on with the site, we don’t even know if liquidators have been appointed as promised, no one talks to us,” he added.

The company went into provisional liquidation in 2009, but there is a glimmer of light for owners, as Louise Zambartas, lawyer for a number of the owners at the site, said that new procedures in place can ‘help people to help themselves.’

“The Entrapped Purchaser’s Law could benefit purchasers at Paradise Hills but an application has to be submitted. However, there are no title deeds issued for the site but if an entrapped buyers’ application is submitted, then the land registry will also open a file and this could, perhaps, then force the issuance of the deeds,” she said.

The Hames paid around €240,000 for their three-bedroom villa, handing over the last instalment just a few months before the developer was dissolved.

UK’s May signals foreign minister Johnson could be sacked