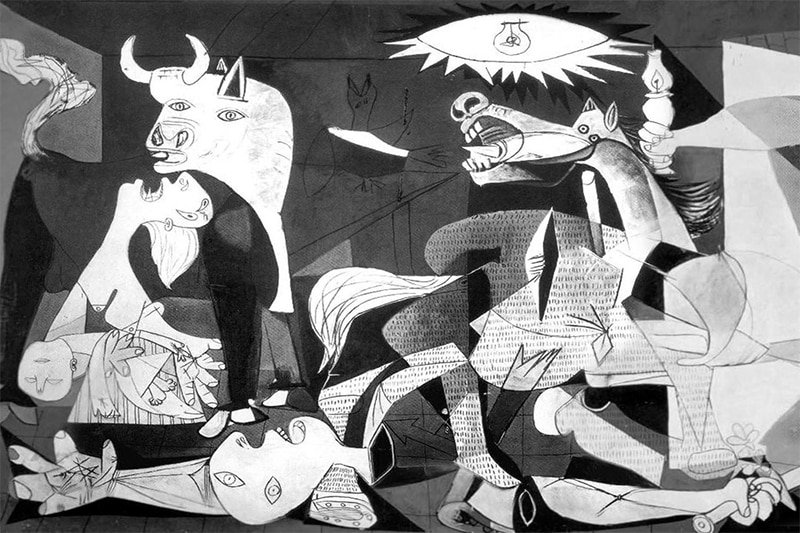 George Orwell, the well-known English author of Animal Farm and Ninety Eighty Four fame, fought in the Spanish Civil War and wrote about his experiences there in a chronicle called Homage to Catalonia in which he prophesied that the fascists under Franco would win or that Spain would be divided. He was right about Franco and apparently wrong about the division of Spain.

With the help of Fascist Italy and Nazi Germany, whose air force razed the town of Guernica – portrayed indelibly on canvass in Picasso’s famous anti war painting Guernica – Franco won in the end and he suppressed and oppressed the Basques and Catalans ruthlessly.

But he skillfully kept Spain together and non-belligerent in World War II and retained power until his death in 1975. What then happened was that Spain shifted gear and without a jolt became a democracy and joined the EU as if the Franco years were just a bad dream. She is now an advanced, liberal democracy even if a bit corrupt. Spain won the World Cup and the Catalan capital, Barcelona, became the coolest city of culture to visit in Europe and Barcelona FC the finest football club in the world.

The economic crisis of 2008 hit Spain hard, however, and the present crisis in Catalonia seems to have been precipitated by a feeling there that the region was paying more than its fair share of the national burden to a corrupt and incompetent central government in Madrid. But there is also an underlying problem that is familiar. It has to do with the cultural and linguistic identity of people. It is the same with Scotland in the UK and Flanders in Belgium as well as the Kurds in Iraq, Iran and Turkey and, dare I say it, the Turkish Cypriots in Cyprus.

The Catalans will decide whether to declare independence unilaterally (UDI) next week. They held a referendum and the Spanish government’s heavy-handed treatment of the Catalonian referendum now makes it likely that the Catalan parliament will declare UDI. It does not look as though the Catalans have thought through the consequences of such precipitate action and may derive some assistance from what happened in north Cyprus.

The Turkish Cypriot parliament declared UDI in 1983 but, unlike the Catalans, the decision was made without holding a referendum – standard practice in self-determination – and not therefore clothed with democratic legitimacy. Indeed in 2004 a good majority of Turkish Cypriots voted in favour of a united Cyprus only to be rebuffed by a majority of their Greek Cypriot compatriots.

The position at present seems to be that many Turkish Cypriots believe UDI was a mistake. It was borne of frustration at being denied their share of the sovereignty of the Republic of Cyprus – not necessarily as equal partners domestically but as joint custodians internationally – and many now wish to have the status quo ante restored if only they can find a balance between keeping the Turks in Turkey sweet and the Greeks in Cyprus not so bitter. The perfect balance has proved elusive but that is a reason for trying harder not for giving up.

I digress. This article is about Catalonia and Spain and UDI and why it is not a very clever thing to do. Statistically UDI has been successful only once. The partition of India and Pakistan along religious lines whereby Pakistan became West and East Pakistan was daft because the Bengalis in East Pakistan are very different from the people in West Pakistan. It did not work and although metropolitan Pakistan was against secession, most countries in the world recognised East Pakistan as the new state of Bangladesh and it became a member of the UN.

All you have to do is look at the map of the Indian subcontinent to conclude that secession was inevitable. It is always a good policy to look at maps when thinking of political problems, a wise old Turk – my father – once told me. Looking at the Iberian peninsula the secession of Catalonia does not look as natural as that of East Pakistan.

Recognition by the metropolitan state is key to secession. Non-colonial independence without metropolitan consent has been impossible in all cases apart from Bangladesh. In the case of the break-up of the Soviet Union there was recognition by the government in Moscow that all the states of the Soviet Union were free to become independent and a huge number of independent states were born in 1991 and 1992 including the Russian Federation itself. In the case of Ukraine it was not even legally necessary because Ukraine was already a separate state and a member of the UN in its own right; although it was one of the first to formally declare independence together with the Baltic states, all three of which are now full members of the European Union with significant Russian communities.

The break-up of the former Yugoslavia, two of whose former constituent states are now members of the EU, was complex, violent and controversial. As for the Czech Republic and Slovakia they are of course the locus classicus of velvet divorce. The important point is that at least seven member states of the EU seceded from metropolitan entities but did so through metropolitan consent rather than UDI.

It is therefore unlikely that Catalonia will be allowed to break from Spain by UDI as easily as her current leadership believes. There are so many questions and so many difficulties and impediments. Problems to do with citizenship, cost, currency and ultimately membership of the EU.

The EU’s position at the time of the Scottish referendum, which will probably apply to Catalonia, was that if Scotland broke from the UK she would have to reapply to join the EU as a separate entity. It is not clear what would happen if Scotland wishes to remain in the EU after Brexit. As the Crown is indivisible and would remain in post after any Scottish independence, it may be that Scotland could remain in the EU if she were to become independent before Brexit but nobody knows and this is probably academic as the majority of Scots wish to remain part of the UK.

The EU has a lot on its plate at the moment and Catalonian UDI is the last thing it needed. Brexit has made the EU very concerned about the integrity of the Union which must be preserved at all costs. This may be the reason the Catalans decided to press for independence now. The EU is feeling sensitive and vulnerable and it may not be inclined to insist on reapplication but it has to address problems of cultural and linguistic identity before they get out of hand.

A few years ago the EU set up a constitutional commission under former president Giscard D’Estaing of France that produced a comprehensive constitution for the EU. Alas it was rejected in referendums in France and Holland and is now gathering dust. The crisis in Catalonia, the Scottish independence referendum, the problems in Ulster in Ireland and Flanders in Belgium and the vendetta in Cyprus all have common features which can best be dealt with at a broader European level. This can be addressed if the EU constitution produced by Giscard D’Estaing is revisited and cultural and linguistic identity is given constitutional backing within the EU independently of the constitutions of member states.

In the meantime the EU must not wash its hands of Spain and Catalonia. The crisis in Catalonia seems a bit artificial and is well within the ability of the EU to resolve with a little gentle arm twisting.

Solving the conundrum of independence

How Diko gave birth to a mouse