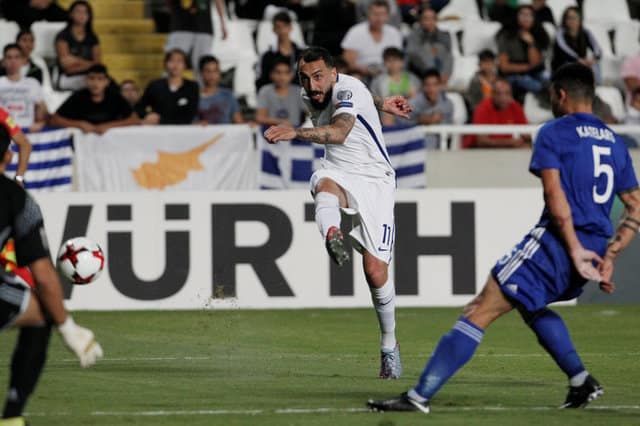 Greece leapt up to second in their World Cup qualifying group after a crucial 2-1 away win over Cyprus on Saturday, almost certainly eliminating Bosnia in the process.

Greece have 16 points from nine games in Group H, nine behind group winners Belgium and two ahead of Bosnia who lost 4-3 at home to the Belgians earlier on Saturday. The Greeks’ final game appears to be a formality at home to Gibraltar who have lost all nine games.

The winners of the nine European groups qualify directly for Russia next year and the best eight of the nine runners-up play off for four more places.

Greece had drawn four and lost one of their previous five games in the group and fell behind in the 18th minute, Pieros Sotiriou scoring at the second attempt after his first shot was saved by Orestis Karnezis.

Cyprus, on 10 points, could have stayed in contention but an awful mistake by Konstantinos Laifis six minutes later let Greece back into the game.

The hapless Laifis gave the ball away near the edge of the penalty area and it was quickly slipped to Kostas Mitroglou who fired the equaliser.

Greece went ahead two minutes later when Alexandros Tziolis rose at the far post to score with a powerful header.

Belgium kept their unbeaten World Cup qualifying record intact after they took the lead and then came from behind in a 4-3 win at Bosnia on Saturday which dented the Balkan nation’s hopes of reaching next year’s finals.

The outcome also sent Italy through to the playoffs as one of the eight best runners-up.

The result left the Belgians, who had already qualified for the 32-team tournament in Russia as winners of Group H, with 25 points from nine games, 11 ahead of second-placed Bosnia who now have only a slim chance of clinching a play-off berth.

Wing-back Thomas Meunier fired Belgium ahead in the fourth minute with his fifth goal in six games, sweeping in a fine cut-back by Eden Hazard on a muddy pitch at Grbavica stadium.

The Bosnians piled on the pressure after falling behind and hit back through midfielder Haris Medunjanin and winger Edin Visca to turn the tables before halftime.

Medunjanin equalised on the half-hour with a close-range finish after he was set up Edin Dzeko and Visca rifled in a fierce shot from 14 metres nine minutes later after a calamitous error by Belgium defender Jan Verthongen.

Striker Michy Batshuayi equalised from three metres after Bosnia goalkeeper Asmir Begovic could only parry a sizzling low shot by Yannick Carrasco on the hour before Verthongen made amends for his mistake with a simple finish.

The centre back volled home at the far post after a corner was driven into his path by Carrasco, silencing the passionate home crowd on a rainy night.

Defender Dario Djumic rekindled Bosnia’s hopes with a thumping 82nd-minute header, only for Carrasco to score less than a minute later, when he took advantage of sloppy defending to steer the ball past Begovic.

Ancient sites in north ‘at risk’

Matuidi puts France in control of their World Cup destiny