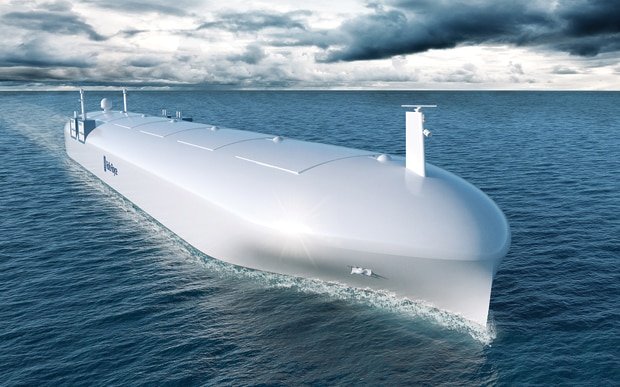 Far from being something out of science fiction, ships with no people on board could soon become a reality says John Ioannou

Imagine shipping is on the cusp of a revolution as great as moving from sail power to steam. Imagine, in a few short years, unmanned ships moving silently across the world’s oceans like drones, delivering cargo faster, safer and cheaper. Imagine these sleek, hi-tech craft being controlled from futuristic onshore operations centres by teams of captains and engineers who use satellite technology to remotely pilot whole fleets across oceans and into ports. Dedicated emergency and maintenance crews are on standby, ready for dispatch in case of any problems, and in port expert shore personnel swarm over the vessel like a pit-stop crew, swiftly executing cargo operations previously handled by ships’ officers.

Sound like a science fiction movie? Maybe not. The world’s first autonomous cargo vessel Yara Birkeland will launch in 2018, and while crew will man the ship for a trial period, it is expected to be fully automated by 2020. The ship will use satellite systems, sensors and cameras to navigate itself along Norway’s coastline and in and out of port, all the while feeding real-time data back to shore which analysts will mine for insights on improving safety and efficiency.

The Yara Birkeland may be pioneering, but the concept of autonomous vessels is nothing new; they have been mulled for over 40 years. The quantum leap came in 2007 when the ground-breaking Waterborne paper triggered EU-funded efforts that engaged universities, tech companies and marine industry experts in defining the vision. Rolls Royce is one such stakeholder investing heavily in automated ship technology and is gambling on it to revitalise its flagging marine division. Mikael Mikanen, president of Rolls-Royce Marine thinks it’s a one-way bet. “Autonomous shipping is the future of the maritime industry. As disruptive as the smart phone, the smart ship will revolutionise the landscape of ship design and operations”.

But while the technology has moved fast, regulatory frameworks have lagged and codes of practice for unmanned vessels must still be drafted by the IMO, the UN’s agency for maritime matters. Nonetheless, efforts will intensify as the commercial incentives for unmanned fleets are huge – seafarer salaries represent 50 per cent of ship operating expenses yet human error leads to 80 per cent of all vessel insurance claims. Autonomous ships will be of a simpler structural design and cheaper to build, and the removal of the accommodation superstructure and navigation deck will allow for lighter, more fuel-efficient vessels that can carry more cargo. Moreover, by digitally stacking ships together in smart systems, owners will be able to mine data more effectively, thus optimising operations and maximising profits.

Safety would also be improved and the risk of losing human lives at sea would diminish. Piracy could become history, as autonomous vessels would be harder to board and have no visible control point such as a navigational bridge. If somehow hijacked they could be locked down remotely or made to steam to safer waters. Bad weather can also be mitigated via Dynamic Positioning and Global Navigation Satellite systems that automatically make finite adjustments to ships propellers, rudders and thrusters, optimising safe handling in rough seas and eliminating human error caused by fatigue or misjudgement.

And this technology will not only transform ships. Oskar Levandar, Rolls-Royce’s vice president of Marine Innovation, Engineering, and Technology believes the impact of automation will cascade through the entire industry. “The shift from having a crew on board to having land-based technicians manage ships remotely will no doubt revolutionise the operation of the global supply chain, creating new services, more efficient schemes for leasing and pooling vessels, the emergence of online marketplaces for cargo delivery by sea, and other clever innovations for the digitally connected age. These changes will probably be disruptive, as new players enter a rather staid market, the same way as Uber, Spotify, and Airbnb have done in other realms.”

While the arguments sound compelling, there is still much invested in the old order and change will probably come in small, cautious steps. Ships represent large, long-term investments – the lifespan of a well-maintained vessel may be 30 years or more – so manned ships will be around for a while yet. It may also prove difficult for shipowners to make the switch, as building one or two autonomous vessels to slowly replace ageing manned fleets may not justify the investment required for the support infrastructure. This slow pace of change will be fraught with risk for the old guard. With the world awash with capital looking for a return, autonomous ships present an attractive opportunity for institutional investors looking for the next breakthrough, and existing shipowners may be blindsided by a completely new type of operator – one as far removed from themselves as the laptop is from the typewriter. Autonomous vessels will demand a different skill set, heavily focused on data and software as opposed to time-honoured seafaring skills. This could come as a shock to shipowners mired in tradition who cannot visualise or accept such radical changes after decades of doing things the same way.

Nevertheless, certain challenges lead many shipping old-timers to declare large-scale unmanned fleets a pipe dream. Crucially, the problem of maintenance persists. Salt water corrosion, thermal stress, vibration, residue accumulation and hull flexing due to large swells are all very hard on equipment, and with no engineers on board it will be difficult to fix problems before serious damage occurs. Maintenance crews will not be able to board in bad weather or deep seas, and dropping teams in by helicopter or launch boat is dangerous and expensive.

Cyber security is another major concern, as hackers could jam satellite systems and disrupt networks. Ships might then be set on collision courses or infected with viruses that render them inoperable. Emergencies will be difficult to tackle with no crew on board and the potential for environmental damage may be higher.

On a broader level, the potential for mass unemployment is undeniable. Although jobs would be created in tech development and shore control, and for maintenance and port operation teams, these will not be enough to absorb the world’s two million seafarers, most of whom are from developing countries. Some governments are already discussing a ‘robot tax’ on firms that shed jobs due to automation and redistributing the gains to their citizens, but the problem here is that shipping firms are usually based in countries other than those where they employ the bulk of their crews. A robot tax levied on a shipowner in Cyprus will not reach their displaced Filipino crewmembers.

The erosion of human skills is also a hazard. Like the satnav driver who loses his primordial sense of direction and ends up in a lake, centuries of seagoing experience and knowledge could vanish. As unmanned ships become commonplace, seafarers will become rarer, until the operator controlling the vessel ashore may know as much about sailing as an air traffic controller knows about flying an airliner. These issues present serious challenges and need greater investigation and analysis.

For now, it’s fun to guess what the future might look like. But one thing is certain: the slow creep of automation will continue until it reaches an inflection point that signals the end of the old order and ushers in a new era of shipping. And where that might take us is anybody’s guess.

See also: Seeking growth in stormy waters, ‘We compete with other countries not each other’,
A history of forward planning