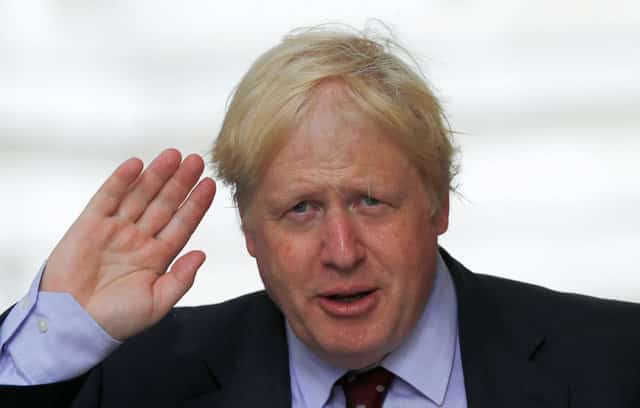 British Prime Minister Theresa May has signalled that she could sack Foreign Secretary Boris Johnson, a Sunday newspaper said, as she tries to reassert her authority after a series of political disasters.

The Sunday Times said it asked May about her plans for Johnson, who has professed loyalty but is accused by some of the prime minister’s allies of undermining her by putting forward his own vision for Britain’s exit from the European Union.

“It has never been my style to hide from a challenge and I’m not going to start now,” it quoted May as replying, in what it called a signal that she was prepared to bring in new ministers to her cabinet and axe those who had caused her problems.

“I’m the PM, and part of my job is to make sure I always have the best people in my cabinet, to make the most of the wealth of talent available to me in the party.”

May has seen her authority over her Conservative Party erode since she called a snap election in June in which she lost her majority in parliament.

Johnson, seen as a potential successor to May, said that Conservative lawmakers pushing to unseat her were “nutters”, adding that a change would lead to demands for another election that could bring a resurgent Labour party back to power.

“Are we really going to be stampeded myopically over the edge of the gorge, with an election that no one wants?” he said in the Sunday Telegraph.

Johnson wrote a newspaper article last month outlining his vision of Brexit just days before May made a major speech on the subject.

While professing loyalty, his interventions have been seen as undermining May and causing unnecessary unrest ahead of the party’s conference last week that culminated in a disastrous speech by the prime minister, marred by a coughing fit and letters falling off the slogan on the set behind her.

Johnson made a plea for loyalty with a typical rhetorical flourish on Sunday.

“‘Quo quo scelesti ruitis?’, as Horace put it at the beginning of a fresh bout of Rome’s ghastly civil wars, and which roughly translates as: “What do you think you are doing you nutters?”

On Friday, former Conservative Party chairman Grant Shapps said he had garnered the support of 30 lawmakers who wanted to remove May from the party leadership, short of the number needed to launch a formal challenge.

Former Prime Minister John Major said he was increasingly dismayed by the plotting in the party by those driven by their own personal agenda.

“The country has had enough of the self-absorbed and, frankly, disloyal behaviour we have witnessed over recent weeks,” he said in the Mail on Sunday.

The speculation about May’s position comes ahead of crucial Brexit talks between Britain and the EU, and the political uncertainty has led to growing concern that no deal would be agreed by March 2019 when Britain leaves the bloc.

The Sunday Times said three cabinet ministers had discussed the need to replace May.

“It’s a ‘when’ question now,” one of the unnamed ministers told the paper. “It feels to me that this is over before Christmas.”

A fourth minister was quoted as saying there needed to be an orderly transition to a new leader and there was no prospect of May being in charge for the next election due in 2022.

The Observer newspaper said unnamed senior Conservative figures said while May had no long-term future they were pressing her to shake up her team, hoping new blood would re-energise the party as well as frustrate Johnson’s ambitions.