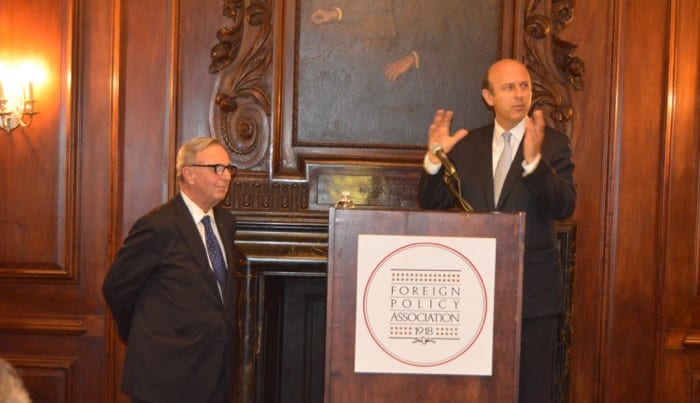 The Cyprus problem can be solved following UN procedures but Turkey’s stance is key as to why there has been no solution, retired ambassador Andreas Jacovides told the Harvard Club at the weekend.

Speaking at an event organized by the Foreign Policy Association, at Harvard Club, he said: “Turkey aims at making Cyprus its protectorate. President Erdogan’s statements and actions – call it megalomania or wish to impose Pax Ottomana – do not augur well.”

Giving the lecture, titled “The role of the United Nations in Conflict resolution; the case of Cyprus”, Jacovides said the UN had a historical role on the island even prior to Cyprus’ independence and should continue have one.

“The Security Council, the General Assembly, as well as the Secretary-General have played and continue to play this role since the problem arose in late 1963 and even earlier, in the days before the independence of Cyprus. This role needs to continue, both in terms of peace making and of peace keeping.”

It was on the basis of the UN Charter and UN resolutions, as well as EU principles, that the Cyprus problem could be solved, “so that the reunited Republic of Cyprus will be a  normal state, for the benefit of all its inhabitants, and for peace and stability in the region” Jacovides said.

The fuel no-one wants but the government must sell