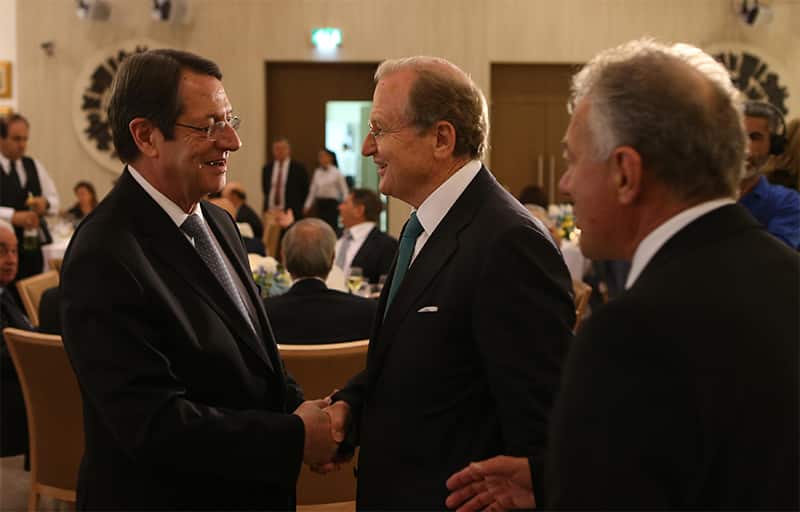 President Anastasiades welcoming guests to the dinner on Sunday night

President Nicos Anastasiades on Monday said that further consolidating and enhancing the competitiveness of Cyprus’ flag and maritime cluster remains one of the government’s most important priorities.

Addressing the opening of the Maritime Cyprus 2017 Conference in Limassol, the president said that the ultimate goal of the government was flexibility, speedy decision-making, upgrading of state services, promoting the Cyprus flag and strengthening cooperation with the private stakeholders involved in the industry.

“The Shipping Taxation System as well as the overall operational infrastructure is gaining strength and is very gratifying to see that more companies are attracted to Cyprus,” he said.

He said that the country has significantly increased its presence in important shipping capitals, with a number of visits and road shows in Hong Kong, China, USA, UK, Germany and Greece. A study to identify new shipping markets and ship types has been recently completed and will be fully utilised within 2017 to increase the country’s fleet.

He added that a testimony of Cyprus’ commitment and support for the shipping industry is the creation of a shipping under secretariat which will operate from next March.

“It is a message of the clear political trust and importance we attribute to the shipping industry of the island, while at the same time it will constitute a convincing leverage for attracting additional quality ship-owners and shipping companies to Cyprus,” he said.

The discovery of hydrocarbons in Cyprus’ EEZ also widens the horizons of the shipping industry, he added, particularly as Cyprus has the potential to develop into an important energy centre for the Mediterranean and beyond.

The president also addressed two events on Sunday evening, a reception in Limassol and an official dinner at the Presidential Palace in Nicosia on the occasion of the conference.

Speaking in Limassol, Anastasiades welcomed the foreign delegates, noting that their presence was proof of the trust and respect enjoyed by the Cyprus shipping industry.

Cyprus has the eleventh largest fleet worldwide and the third largest in the European Union, and is one of the largest ship management centres.

The shipping sector contributes seven per cent to the country’s GDP.

During the reception in Limassol, Anastasiades awarded the Cyprus Maritime Award 2017 to MSC Shipmanagement Ltd.

The three-day Cyprus Maritime 2017 conference will be attended by more than 800 delegates from around 35 countries, including European Commissioner for Transport Violeta Bulc, European officials, shipowners, and CEOs of international shipping organisations and companies.

A Maritime Services Exhibition was opened on Monday by Transport Minister Marios Demetriades.

On Wednesday, Commerce Minister Yiorgos Lakkotrypis will speak at a panel discussion on geopolitical developments with his Egyptian counterpart.