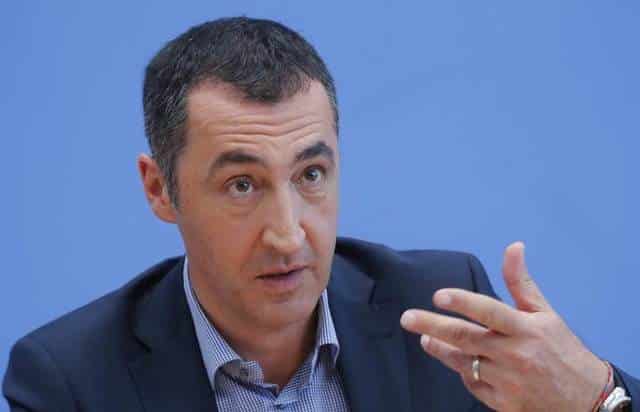 Cem Ozdemir speaks during a news conference in Berlin

German Chancellor Angela Merkel said on Monday an agreement within her conservative bloc on limiting migrants would help forge a new government coalition, but one of the key partners, the Greens, said it would not become policy.

Merkel‘s Christian Democrats (CDU) agreed with their conservative CSU Bavarian allies on Sunday to limit to 200,000 the number of people Germany would accept per year on humanitarian grounds.

It was part of Merkel‘s drive to get the sister party on board so that she can start talks with the Greens and Free Democrats (FPD) on forming a “Jamaica” coalition – named for the black, green and yellow colours of the three blocs, which match the Caribbean island’s flag.

“We achieved a joint result which I think is a very, very good basis to go into exploratory talks with the FDP and Greens,” Merkel told a joint news conference with her Bavarian counterpart Horst Seehofer on Monday.

But underlying the difficulties in forging a coalition, the Greens said they disagreed with the migrant limit.

It would not stop a coalition being discussed, Green co-leader Cem Ozdemir said, but stressed it would not be part of the formal coalition agreement if one is reached.

Merkel said her conservative bloc would begin exploratory talks next week on forming a coalition – first with the FDP and Greens separately on Oct. 18, and then in a three-way format on Oct. 20.

Such a three-way tie-up is untested at national level but it is Merkel‘s only realistic option of forming a government as the centre-left Social Democrats – her previous coalition partners – insist they want to go into opposition.

Ozdemir dismissed the migrant limit as an internal CDU-CSU matter.

“It definitely won’t appear in a possible coalition agreement,” he said, adding the pro-migrant Greens wanted quick and fair processes for newcomers to Germany, effective integration measures and an immigration law with clear rules and criteria.

The Greens reject a cap on migrant arrivals that the Bavarian CSU has been advocating in view of an influx of 890,000 migrants in 2015 and 280,000 in 2016, with many of them entering the country via Bavaria.

Although arrivals are expected to drop further this year, the issue is expected to set sparks flying between the CSU and Greens in coalition talks.

Merkel said the limit of 200,000 migrants per year did not mean the 200,001st refugee to arrive would be deported but rather he or she would have the right for his or her case to be individually considered. A package of measures would, however, ensure that the limit is not breached, she added.

Merkel and Seehofer stressed that the government and lower house of parliament could change the rules to allow more or fewer people into Germany if the national or international situation changed unexpectedly such as if a war were to break out of if there were rising unemployment in Germany.

Seehofer said it would be mandatory for parliament to have a say on the adjustments.

But Merkel said even if there were adjustments there would not be a repeat of the 2015 migrant influx because of factors such as the migrant deal between the European Union and Turkey, partnerships with Africa and the expanded remit of the EU’s border control agency Frontex.

She said asylum applications for newcomers would be processed in centres where decisions can also be made to deport them because it had proved difficult to deport rejected asylum seekers once they had been distributed to towns.

Despite his opposition to the conservative deal, Ozdemir advocated beginning talks: “We all need to just get started now,” he said on ZDF television.

The FDP said the conservative compromise had prepared the way for coalition talks.

“The foundations have been laid,” Marie-Agnes Strack-Zimmermann, deputy head of the FDP, said on ZDF television.