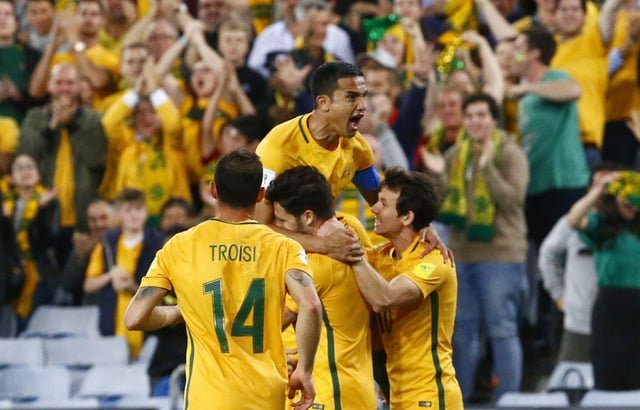 Tim Cahill scored an extra-time winner to keep Australia’s World Cup hopes alive with a 2-1 win in the Asian qualifying playoff on Tuesday which dashed war-torn Syria’s fairytale bid to reach the finals for the first time.

Syria fought right until the end of the 120-minute match and Omar Al Somah could have secured their passage on the away goals rule at the death, only for his brilliantly struck free kick to hit Mat Ryan’s right post and bounce away.

The 3-2 aggregate victory sends the Socceroos into an intercontinental playoff in November against the fourth-placed team in North and Central America and Caribbean (CONCACAF) qualifying with a World Cup spot on the line.

The United States, Panama and Honduras, the three teamns who could provide the opposition, play their final qualifiers later on Tuesday.

The Syrians had battled the odds to even get into the playoff, having been forced to play all their “home” matches in Malaysia because of the civil war in their own nation.

Without five first-choice players through injury or suspension, they also had to play most of extra time with 10 men after midfielder Mahmoud Al Mawas was dismissed for two yellow cards.

“I think (it might have been different) if we had stayed with 11 players and hadn’t had that red card and not hit the post at the end,” Syria coach Ayman Hakeem told reporters.

“I am very proud of my boys with what they have achieved so far and that’s going to be continuing moving forward as well.”

Cahill scored Australia’s opener in the 13th minute but it was not until 96 minutes later that he notched up his 50th international goal to keep alive his country’s hopes of a fourth successive appearance at the World Cup finals.

It made for another nervous night for Australian fans as the Socceroos once again failed to find a way to get the scoreboard to reflect their dominance.

“We always find a difficult way to do things … but we got through, I think we deserved to get through,” Australia coach Ange Postecoglou said.

“Timmy was Timmy, that’s why he’s the greatest ever.”

The Syrians made the perfect start in the sixth minute to cancel out Australia’s away goal advantage from the 1-1 first-leg draw.

Tamer Haj Mohamad dispossessed Mark Milligan in midfield and he fed Al Somah, who outpaced the Australian defence and planted the ball high into the net with his left foot.

The Asian champions were back on terms in 13th minute when Mathew Leckie broke down the right and delivered a pinpoint cross that 37-year-old Cahill headed home.

Australia dominated the remainder of the first half, with Syrian skipper Zaher Medani blocking a Cahill shot and goalkeeper Ibrahim Alma denying James Troisi and Leckie.

Alma again had to be at his best to stop a fierce Rogic strike from the edge of the box after 70 minutes and the Celtic midfielder curled a shot just wide of the far post from the ensuing corner.

Once Al Mawas was sent off for a second foul on Aaron Mooy four minutes into the first period of extra time, it appeared only a matter of time before the Australians would break down the already weary visitors.

Robbie Kruse finally carved out the decisive chance in the 109th minute when his perfectly weighted cross to the far post found Cahill, who headed the ball into the top left-hand corner of the net to the delight of the majority of the 42,000 crowd.