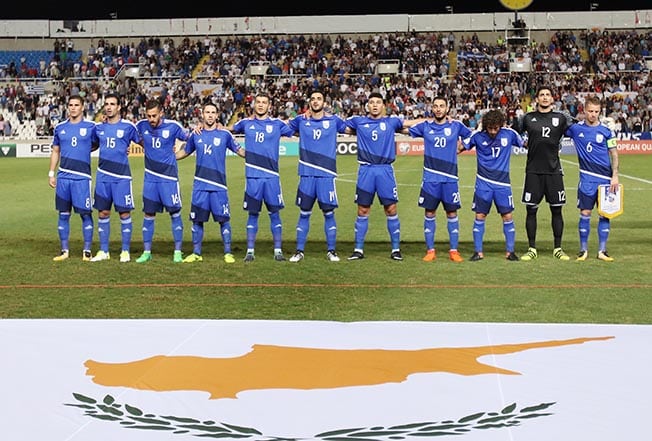 Cyprus, who didn't manage to qualify for next summer's World Cup finals, wrap up their campaign against group winners Belgium

Saturday’s 2-1 defeat against Greece mathematically ruled out Cyprus’ chances of reaching the playoffs for the 2018 World Cup, making Tuesday’s meeting with group winners Belgium a matter of pride.

Cyprus took the lead against Greece through Pieros Soteriou but goals from Kostas Mitroglou and Alexandros Tziolis ruled out any outside hope of the islanders making it to Russia next summer.

Greece, however, now just need a home win against group minnows Gibraltar to make the playoffs and, with nine defeats from nine, conceding 43 goals in the process, it would take a monumental blunder from Michael Skibbe’s men to not pick up three points.

The Greeks largely have Belgium to thank for their privileged position as the Red Devils, despite being confirmed group winners, defeated Bosnia 4-3 in Sarajevo. That now means Bosnia must defeat Estonia away, and hope for a major upset in Athens.

Belgium have blitzed through Group H, winning eight of their nine matches, and drawing the other. And their professional display against Bosnia is a warning to Cyprus that they will not be in a charitable mood on Tuesday night in front of their own supporters.

Nevertheless, Cyprus manager Ran Ben Shimon, only three matches into his new position, will be able to try out a number of different players and tactics with the future in mind.

“We will go to Belgium to play good football. It is a big test,” the manager told RIK after the defeat to Greece.

“We go into every game aiming to win. We want to create an identity and so every match is important,” he concluded.

Belgium boss Roberto Martinez is also expected to mix up his line-up, though that will not mean much of a drop in quality with one of the richest international squads in world football at his disposal.

Striker Romelu Lukaku, currently third in the scoring charts for this qualifying campaign with ten goals, is a doubt due to an ankle problem while Manchester United team-mate Marouane Fellaini is ruled out with a knee injury.

Though their main striker may miss out, Belgium are not a side who struggle when it comes to goals, with Michy Batshuayi ready to step into Lukaku’s place and the likes of Eden Hazard, Dries Mertens and Kevin De Bruyne in support.

Only reigning world champions Germany, with 43 goals, have scored more than Belgium (39) this qualifying campaign so Martinez’s side will be motivated to go one better than their neigbours.

It will also be a special encounter for defender Jan Vertonghen. The 30-year-old is set to become the most capped player in Belgium’s history after equalling Jan Ceulemans’ tally of 96 against Bosnia.

Keen to witness the special event as well as their country’s last official game before the World Cup, more than 37,000 tickets had been sold by Monday morning for the match that will take place at the Stade Roi Baudouin in Brussels (kick off 9.45pm Cyprus time).

Entering the world of Karagiozis