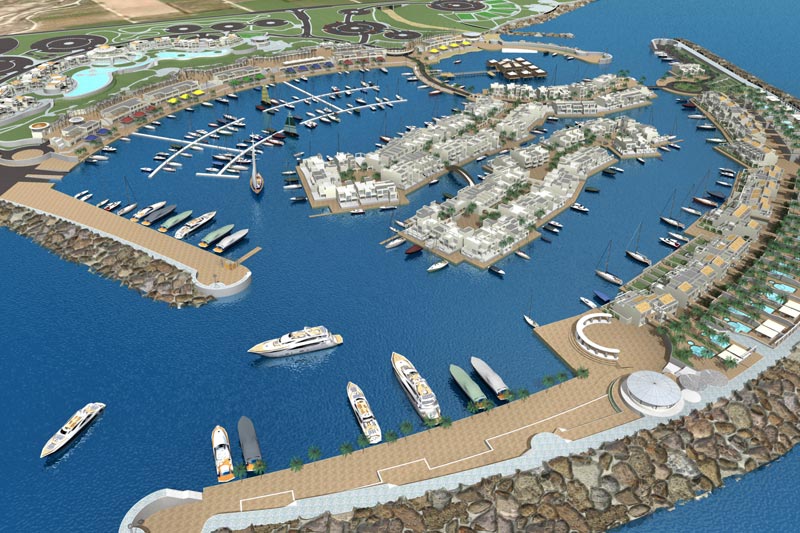 Architect's impression of the Paphos marina

PAFILIA Group will find out in the coming days whether they have met the necessary criteria to construct a long-anticipated marina in Paphos, according to the head of the Paphos Chamber of Commerce and industry.

Andreas Demitriades told the Cyprus Mail on Monday that he expects a decision to be made before the end of October.

“The Pafilia Group were asked to provide all of the necessary documentation to highlight their ability to promote, implement and finance the project for the construction of the marina in Potima in Kissonerga. They need to demonstrate that they meet the terms and conditions of the competition,” he said.

The Poseidon consortium had planned to build and run the new Paphos marina, which came with a €215 million price tag, but they were rejected in April, which meant that tender runner up Pafilia could step up and submit their paperwork for a chance to snare the deal.

The Pafilia bid is a different design and costs less, around 175 million euros, and if their bid is successful the project will be awarded to them. However, if the developer fails to meet the criteria, the entire process, which has already dragged on for more than a decade, will be cancelled and another tender announced, he said.

“This tender has gone through turbulent times due to the various recourses to the supreme court. I think it was wrong not to award the tender immediately to the first company The tender authority has the right to do this, and by now, the marina would be built and fully operational.”

He noted that in this instance, even if the supreme court had found the government liable to some degree, the benefits reaped would have probably exceeded any amount the government had to pay in compensation.

The tender for the project was first announced in 2007 and in 2008. It was initially awarded to the Cybarco-Pandora consortium, which includes the Leptos Group.

However, the other two bidding consortiums, Pafilia and Poseidon, a joint venture in which Aristo Developers is a mayor stakeholder, challenged the award at various stages. They claimed the winning developer used inside information to offer a lower figure for the construction of the marina, and won the tender.

In December 2015, the supreme court voted in favour of Poseidon and their €215m project. They then had to provide proof of funds – a total of 60 per cent of the amount, which was set at €125m.

However, after many months of negotiation, it was decided that Poseidon was unable to meet the financial criteria, and the project then passed on to Pafilia, the biggest developer in Cyprus.

Kissonerga community leader, George Stylianou said that the local council is fed up with the delays and that a final decision must be made ‘one way or another’.

“Our concern is that the current situation is holding us back from taking any important decisions and we need to know if there will be a marina or not,” he said.

He said that the stretch of coastline earmarked for the construction is often victim to large waves which need to be controlled by the construction of breakwaters in order to provide a better level of safety for swimmers and beach users.

He said that this was being held up by the inaction over the marina.

He added that once safety at the 1.5km long stretch of beach is improved, it will be the best beach in the area, with parking and other facilities.

“Even though no-one has drowned here for the last one hundred years, the sea can get rough with large waves and people have to be very careful. This is an important beach for us, it will help the tourist industry and greatly benefit the community,” he said.

The proposed marina will include up to 1,000 berths and more than 42,000 square metres of residential and commercial developments. The project will take approximately three years to complete.

Our View: Waste-treatment plant probe must be wide-ranging

Cyprus playing for pride in Belgium