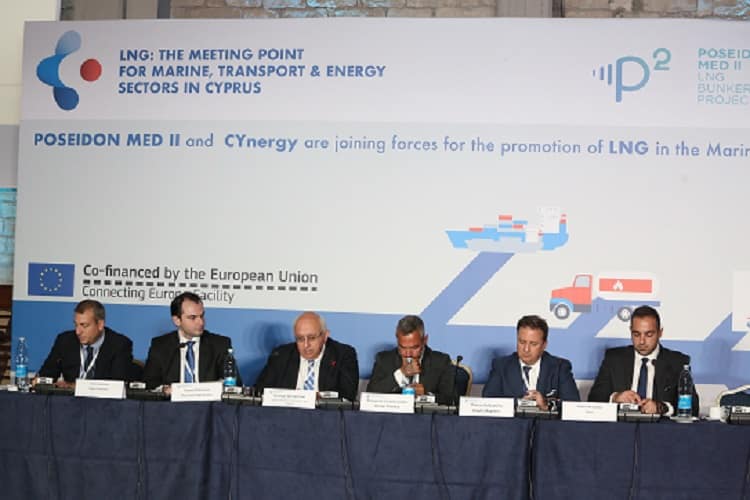 On Friday 29th September 2017, thirty-one experts discussed how two major co-financed projects –Poseidon Med II & CYnergy- could be the stepping stones for turning Cyprus into an energy hub and Eastern Mediterranean marine transportation with a sustainable, eco-friendly profile through the use of LNG.  The Conference entitled “LNG: the meeting point for Marine, Transport & Energy sector in Cyprus”, attracted more than 180 delegates from marine & energy sectors, public bodies, port authorities and international organisations.

Turning LNG from prospect into reality in shipping was the focus of the first session, where distinguished panelists highlighted global experience and strategies promoting LNG as marine fuel, plans for LNG bunkering in Cyprus as well as funding opportunities for investments, setting the scene for LNG uptake in the region.

Innovative LNG fuelled vessels and storage technologies, quantity and quality verification processes, terminals’ experience and the shipyards approach towards the LNG as fuel era were presented at the second Conference session, underlying how pioneers accelerate technology uptake and create a fertile ground for the adoption of LNG in ships and ports.

Dr. Panayotis Zacharioudakis, Managing Director of OceanFinance & Project Manager of CYnergy, welcomed the audience to the final session on Energy and Transport inviting them to take the discussion regarding the Cypriot gas exploration and commercial exploitation one step further to the benefits for Cyprus by the everyday life use of NG. This first public presentation of the CYnergy Action, inaugurated by Antonis Ioannou, Acting Director of the Energy Service of the Ministry of Energy, Commerce, Industry and Tourism, was also saluted by W. Sopinski, who took the podium for the second time to deliver a short message on behalf of DG Energy, expressing full support to the project and congratulating CYnergy stakeholders for achieving significantly high co-funding rate in the context of the CEF Synergy Call.

Dr. Symeon Kassianides, President of CyGas (DEFA), presented a clear roadmap for the implementation of the Cyprus Republic’s plans regarding storage and distribution of NG in Cyprus, while representatives of the CYnergy Consortium discussed further the steps towards the transition of the internal market to the use of NG that will turn Cyprus into an energy hub of the South-East Med Sea. The session’s concluding panel discussion addressed the needs of the Cypriot industry conveying a strong message: In this new effort to bring NG to Cyprus, all related stakeholders are cooperating closely and by taking into consideration the Cypriot community’s needs coordinate their actions to establish a sustainable NG market.

The Conference was organised by Bunkernet, one of the main partners of Poseidon Med II & CYnergy project.

Videos of the conference are available here

Presentations of the conference are available http://www.poseidonmedii.eu/news/PMII__CYnergy_conference.htmlhere

Ship management revenues up in H1