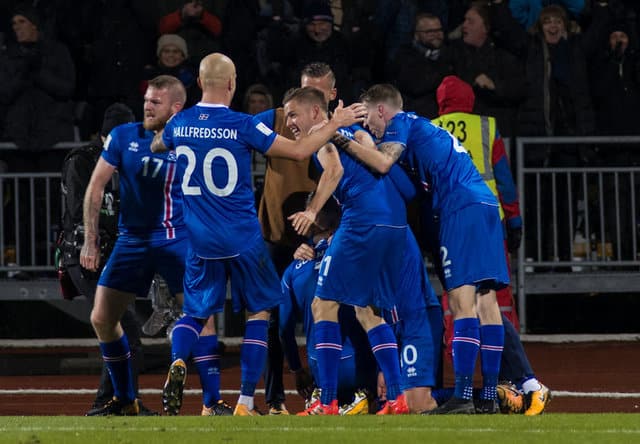 Iceland, the smallest country ever to reach the finals, booked their ticket to next year's tournament in Russia by beating Kosovo 2-0 to top their European qualifying group

Iceland’s football supporters were in raptures as they celebrated in the capital and across the country after the national team qualified for their first World Cup.

Iceland, the smallest country ever to reach the finals, booked their ticket to next year’s tournament in Russia by beating Kosovo 2-0 to top their European qualifying group.

“Are you kidding! We are going to the World Cup!” the local TV commentator screamed as the final whistle blew and fireworks erupted over the Laugardalsvollur national stadium.

Crowds of people waited at Ingolfstorg in downtown Reykjavik for the Iceland players to arrive by bus and when their heroes appeared on stage there was a deafening roar.

Emmsje Gauti, one of Iceland’ most famous rappers, joined in the celebrations with the national team, who jumped around in delight, amd sang ‘Reykjavík er okkar’, ‘Reykjavik is ours’.

At the American Bar, the biggest sports bar in downtown Reykjavík, the cry was: “Iceland to the World Cup”. Outside the rain came down but inside nothing could dampen the spirits.

“The smallest country to get to the World Cup by far, this is surreal,” supporter Gunnar Atli Thorodssen said on a busy Monday night. “I have to book my ticket to Russia immediately.”

Iceland has a population of about 350,000 while the previous smallest country to have reached a World Cup was Trinidad & Tobago, in 2006, which had 1.3 million people.

The crowd in the bar watching on TV clapped along with the primal chant, which is sure to be a feature in Russia next year, as it was at the European Championship in France last year where Iceland beat Austria and England to reach the last eight.

“The World Cup, Pele, Maradona and Aron Einar Gunnarsson,” the national team manager Heimir Hallgrímsson told TV reporters. Behind him, the players joined the crowd in singing “Feroalok”, the team’s anthem, which means: “I am home”.

Gunnarsson has no doubt that the World Cup is where Iceland, ranked 22nd in last month’s world rankings, belong.

“Nonsense? I don’t know if this is nonsense,” he said. “After we lost against Croatia (in the 2014 World Cup playoffs) we aimed at qualifying next time. In my opinion we were in the most difficult group, but we decided that we were just going to finish this. We had no interest in some playoff bother.”

Inside the bar, the rambunctious crowd, wearing their red, white and blue jerseys, bounced around. Even the tourists appeared to get caught up in the excitement.

“Not since 1996, when Tony Adams played for Arsenal, have I followed football, but last summer that all changed,” said Arni thor Arnason, with a beer in his hand. “Now we’re going to the World Cup, unreal. I still don’t believe it.”

Reykjavík’s bars usually close at 1am on weekdays but Monday’s celebrations seemed set to continue until dawn. There will be some sore heads on Tuesday but come the start of the World Cup the whole country will likely be at a standstill.

Appeal against FBME US ban runs out of appellants