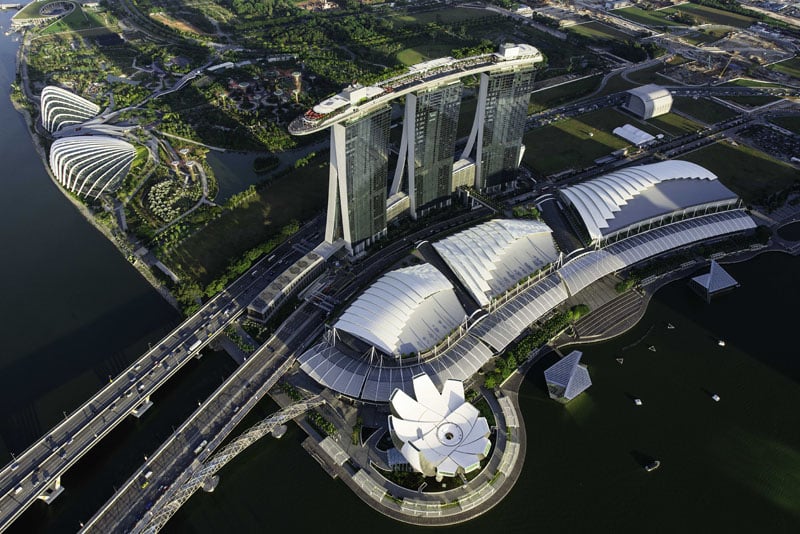 The stakes are high when it comes to adapting to rapid urban densification. Innovation is happening all over the world, but the most effective developments are realised when design and policy come together, as they have in Singapore.

Hip-hop supergroup De La Soul’s fourth album title, Stakes is High, may be an appropriate message to officials, architects and urban design professionals responsible for designing and building the cities of today and tomorrow.

According to UN projections, by the year 2050, the world population will increase to 9.8 billion from 7.6 billion, and close to 66 per cent of the population will live in cities. Rightfully so, there is growing investment in the study of our cities and whether they can be designed to respond and adapt to rapid urban densification.

To accommodate increasing populations in cities, the trend at the end of the 20th century was an emerging mixed-use building typology of office, commercial and residential hybrids — tall towers over retail podium blocks. These structures, while showcasing our ability to engineer high and slender, often lack a proper relationship to one another. They fail to integrate into a city’s fabric and struggle to find a relationship with public space, often with little reverence to their surroundings.

So, how can these buildings be reshaped to contribute to a greater quality of city life?

Take Singapore as an example. Over the past two decades, Singapore has been a prolific promoter of novel building and urban scale experiments, resulting in a city center filled with a great diversity of spatial experiences at both ground level and at heights.

It’s an anomaly among its peer cities of the same size. New buildings are porous, interlinked with public transit systems below, sky bridges above, and clad with gardens. Streets are well proportioned and there is a sense that the human experience is prioritized. The combination of smart urban design, stunning high-tech architecture and a command over indoor-outdoor living represents a striking model for other cities to emulate.

Singapore’s success is no accident. In large part, it is made possible by incentives and policymaking by the Singapore Urban Redevelopment Authority (URA). The combination of smart policymaking and dialogue between the URA, designers and developers is a true recipe for success.

One guideline the URA has adopted, the 45-degree rule, allows developers to build open green-space amenity decks within buildings, and they can do so for free. The taller the void, the more free area can be granted. This simple rule limits wall-like developments and encourages more outdoor spaces at height.

Another policy inspires terracing building geometry rather than vertical structures, which has had a direct visual impact on the city skyline. The URA team is always tuning these incentives to guide and support smart development. Each rule has been met with inventiveness on the part of the community of architects and designers who receive them; take, for instance, the creation of Skyparks, Sky Forests and many other types of (sky) innovations, all of which contribute to a vibrant, livable and dense urban center. Architects are also innovating in other cities around the world. Take Bjarke Ingels Group’s series of “court-scrapers” in New York City and for Toronto (proposed). But we cannot rely only on architects to breed these concepts and realize these structures. Truly impactful developments are achieved when both design and policy are effectively married.

Back to Singapore, one finds innovation even in public-housing projects. The Singaporean architecture practice WOHA conceived of Skyville Dawson, a public-housing estate that positions densely planted terraces with mature trees every 12 stories, breaking up the building scale along its height. The result is more a vertical village than a block-tower extrusion. WOHA’s latest book, “Garden City Mega City” refutes the idea that high density equals a reduced quality of life, instead calling for “high-density high-amenity” architecture.

There is also Singapore’s Sky Habitat, a private high-rise residential development that multiplies the ground plane with three garden bridges crossing between two 38-storey residential towers. Each tower is stepped in profile, creating garden terraces for over one-third of the units. The accessible garden bridges allow more space for residents to spill out from their homes and enjoy the outdoors together. Sky Habitat also reclaims 80 percent of the ground area it has displaced in the form of terraced and shared garden spaces.

The principles of a multi-ground, three-dimensional city are not new. In the 1960s, Yona Friedman proposed the concept of La Ville Spatiale, a vision to build levitated three-dimensional structures over cities filled with housing modules, gardens, and public spaces. There is also Habitat 67 in Montreal, designed by Moshe Safdie, which is perhaps the best known built version of a three-dimensional building system. Habitat 67’s mission was cleverly “for everyone a garden.”

So, can we consider shared spaces up high the true public realm, or do these spaces suffer from privilege — environments surveilled and controlled? And in locales where planting trees and plants may not be sustainable due to climate and geography, what else can we propose aside from putting trees on buildings? Are there other opportunities to innovate with commercial and public programming at height to create a more intricate and interesting three-dimensional experience of the city?

It is clear that the richest innovation stems from dialogue between policymakers and designers, working in close collaboration with one another. The planning parameters do not need to be complex, and as seen in Singapore, even a simple policy can have a profound impact, ensuring that buildings that are interconnected and complementary to each another better fit their surroundings. As our urban centers continue to grow more “mega” and become more densely populated, it is critical that we continue to prioritize these explorations and experiments, as they will ensure the cities of the future remain friendly for us all. Jaron Lubin joined Safdie Architects in 2004, and was named Principal in 2012. He was part of the competition-winning design team for the Marina Bay Sands in Singapore. His assignments include proposals for the National Art Museum of China in Beijing, a new Chinese opera house in Hong Kong and a competition entry for the National Library of Israel. He is currently involved with many of the firm’s Singapore projects including the residential high-rise tower Sky Habitat and the new land-side expansion of Singapore’s Changi Jewel Airport. He has previously held Design Critic residencies at The Boston Architecture College and the Harvard Graduate School of Design.

Emirates: The best time to visit Dubai is now

No food supplies for the enclaved for second week in a row, UN says