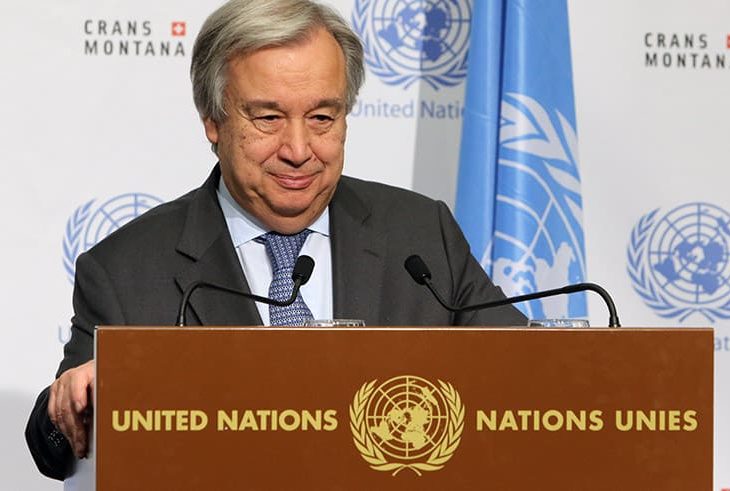 Following the release of the UN Secretary-General’s report on Cyprus, the government on Tuesday stuck to its two-point narrative, first that it had done all it could have to salvage the peace process, and secondly that Turkish intransigence was ultimately to blame for the collapse of the talks in Switzerland.

With presidential elections looming in January, the administration of Nicos Anastasiades was fending off criticism from all quarters that it had either not gone far enough or else ceded too much during the crunch negotiations in Crans-Montana this summer.

The UNSG’s report on his good offices mission in Cyprus was circulated at the UN as an official document this week. It assigned no blame, but did remark that an “historic opportunity” for a settlement had been missed in Switzerland and was exactly the same as a draft issued at the end of September.

Among others, Antonio Guterres noted in his report: “Even if all the core enablers are in place, as they appeared to be in Crans-Montana in late June, I am convinced that the prospects of finally pushing this process ‘over the finishing line’ will remain elusive without the strongest of political will, courage and determination, mutual trust and a readiness on the part of all parties to take calculated risks in the last and most difficult mile of the negotiations.”

Predictably, political parties piled on Anastasiades for his handling of the talks.

“The contents of the UN Secretary-General’s report are at odds with the fairy tale of President Anastasiades,” said Akel leader Andros Kyprianou.

The report, he added, apportions no responsibility to the Turkish side, as the president would have the public believe.

Moreover, Kyprianou hinted that the Turkish side may have been willing to meet the Greek Cypriots halfway in Switzerland, because otherwise the UN chief would not have submitted to the sides an informal document outlining a mechanism for a solution during the dinner of July 6 to 7.

This contradicted Anastasiades’ assertion that the fault for the stalemate lay entirely on Turkey, he noted.

The election campaign office of Diko leader Nicolas Papadopoulos meanwhile called the UNSG’s report “the worst in the history of the Cyprus problem.”

“It is the certificate of failure of Anastasiades’ strategy,” a statement read.

Papadopoulos decried the fact the report let Turkey off the hook, and that it “locks in” the “dangerous concessions made over the last years by Anastasiades and Christofias.”

He also sounded a note of caution, in that the UN sets as a goal the achieving of a “strategic agreement” rather than a comprehensive agreement, which has been longstanding objective of the Greek Cypriot side.

Also worrying was the lack of any reference to Turkey’s violations of Cyprus’ economic waters while reunification talks were ongoing in Switzerland.

Responding to the criticism, government spokesman Nicos Christodoulides said the UNSG deliberately did not apportion responsibility for the failed outcome as he wished to leave open the possibility of the resumption of the – now stalled – peace process.

“But at the same time, taking into account the final result at Crans-Montana, a product of which… was the unacceptable Turkish insistence on the continuation of the Treaty of Guarantee and the existence of intervention rights, it is obvious who is responsible for the non-solution of the Cyprus problem,” the spokesman said, alluding to the Turkish side.

It was clear from the report, he added, that the talks broke down over security and guarantees.

“It is therefore at least distressing that some quarters in Cyprus are blaming the President of the Republic, despite the fact that Turkish Cypriot and Turkish officials have publicly confirmed, both before and after Crans-Montana, the aforementioned Turkish approach to the chapter of security and guarantees.”

The parties’ various statements on the UNSG’s report, added Christodoulides, “unfortunately prove beyond a shadow of a doubt the intention of some, ahead of the presidential elections, to use the report as a means of criticising the President of the Republic, serving political and other expediencies, without regard for the possible risks arising through such approaches.”

The spokesman’s statement ended with a promise to continue working towards a resumption of talks.

Pharos ends its festival with soundscapes